Syria is not for sale 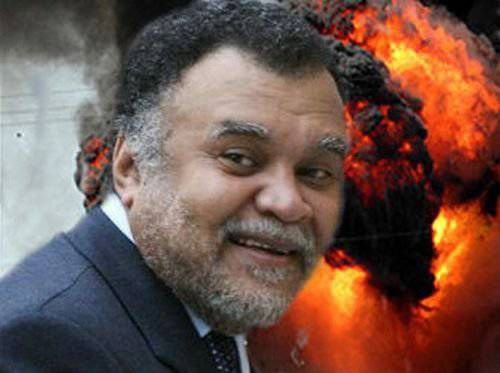 Yesterday, the world's media vividly covered information about the alleged "deal" between Saudi Arabia and Russia. The information originated from anonymous sources, "Reuters" and went to roam on the Internet. It was reported that Prince Bandar bin Sultan, the chief intelligence officer of Saudi Arabia, allegedly offered to comrade Putin 15 billion dollars for weapon and promised that the monarchies of the Persian Gulf would not create competitive interference with the export of Russian gas to Europe. And Russia, in exchange for such generous promises, will have to stop vetoing resolutions on Syria in the UN Security Council. It was described in detail yesterday at "Military Review".


A day passed since the explosion of the “information bomb”. Fragments scattered, but neither killed nor wounded. Official denial neither from Russia nor from Saudi Arabia followed. There was, of course, no evidence.

As reported by the Syrian Agency SANAVitaly Naumkin, head of the Center for Arab Studies at the Institute of Oriental Studies of the Russian Academy of Sciences, questioned the press that Saudi Arabia had offered the Russian Federation a deal to buy 15 weapons worth billions of dollars in exchange for changing Russia's position on Syria.

“It looks like trade, it is unprecedented to do such transactions,” the expert noted. - Negotiations were underway, but this option is not possible, because here we are talking about the Russian side about a long, reasoned enough and reasonable, supported by the position. The fact that it will be exchanged for a deal is very doubtful. ”

Comrade Naumkin added that there were precedents when certain agreements were reached with Saudi Arabia, but the Saudi side did not fulfill them.

As noted by newsru.com, rumors about the deal proposed by Saudi Arabia have not been confirmed. Nevertheless, Western media are confident that the proposal to Vladimir Putin was received.

As an unnamed high-ranking source in the field of military-technical cooperation said, Russian arms exporters did not receive offers from Saudi Arabia to buy weapons. "We do not know anything about such intentions of the Saudi side", - quotes the source of the RIA "News».

But the British newspaper «The Times» is sure of the opposite. According to some Middle Eastern sources, Saudi Arabia definitely offered Russia a large sum for the supply of weapons in exchange for ending relations with Assad. The Arabian state promised and not to compete with Russia in gas supplies to Europe. Prince Bandar bin Sultan supposedly made such proposals, being in Moscow at the end of last month.

However, Moscow is unlikely to change its position on Syria. Vladimir Sazhin, an expert at the Institute of Oriental Studies of the Russian Academy of Sciences, says: “I don’t think that Russia will change its principled position in exchange for not entirely proven future deals.”

According to France Press, citing diplomatic sources, Russia has rejected a proposal by Saudi Arabia to conclude a deal involving Moscow’s refusal to support Damascus at the UN. According to a Syrian source agency, the Saudis did not take into account that Moscow has other interests in the region than financial ones, notes "Lenta.ru".

As France-Press sources told, Prince Bandar tried to explain to President Putin that there was only one way out of the current situation in Syria - the use of force. President Assad will be removed from power. The Saudi curator of foreign policy and intelligence services made it clear to the Russian partners that there would no longer be peace talks: the Syrian opposition would not participate in them.

“In this regard, Bandar asked Russia not to hinder the adoption of resolutions by the UN Security Council authorizing increased pressure on Assad. In exchange, he promised several preferences. Firstly, to help strengthen the influence of the Russian Federation in the Middle East region, from which the Americans are gradually leaving. Secondly, to ensure that under the new government Syria will not become the base for training Islamist militants going to fight in the North Caucasus. Thirdly, Bandar promised not to allow the construction of pipelines from the Persian Gulf, through which cheap hydrocarbons would go to Europe through Syrian territory, which could shake Russia's position on the European oil and gas market. And fourth, the prince offered to buy 15 billions of dollars worth of weapons in Russia. ”

"The Business Standard" referring to France-Press, notes that in 2009, Syrian President B. Assad refused to sign an agreement with Qatar on the construction of land pipelines from the Persian Gulf to Europe through Syria. Assad rejected the proposal in order to protect the interests of his ally Russia, which supplies natural gas to Europe.

The publication cites the words of an unnamed Syrian politician (a diplomat with contacts in Moscow). This man said: "President Putin listened politely to the interlocutor and let him know that his country will not change its strategy."

Responding to a question about the meeting of Bandar and Putin, the Syrian diplomat said: “As it happened before with Qatar and Lavrov (at the talks), Saudi Arabia believes that politics is a simple matter of buying people or countries.” He added that the Saudis do not understand: Russia is a major power, and it conducts politics differently. Syria and Russia, the diplomat noted, "have close ties for more than half a century in all areas, and the Saudi rials will not change this fact."

Arabamericannews.com writes with irony that theoretically, from now on, the Syrian opposition militants are subordinate to one commander: the Saudi prince Bandar bin Sultan. The man, previously involved in the “unsuccessful military adventure” in Beirut, today claims to change the balance of power in Syria.

Bandar is in itself, the newspaper notes, - "the problem for Saudi Arabia." Unlike Riyadh’s calm diplomacy, this prince has very high expectations, nothing to do with reality.

Bin Sultan’s latest military experience took place in Lebanon. After the 2006 events of the year (meaning the Lebanese-Israeli crisis), Prince Bandar convinced the Saudi king to finance the militia for Saad Hariri. There is evidence that Bandar spent more than $ 200 million to create paramilitary forces, which suffered, in May, 2008, a catastrophic defeat - in less than 20 hours.

As for Syria, then here Bandar bin Sultan did not deviate from his usual approach. He set the bar of his expectations too high. According to some people who have met him in recent weeks, he now does not see the question more important than the Syrian one.

Prince Bandar argues that it will take up to eight months to arm and consolidate the rebels and tilt the scales on the Syrian battlefield in favor of the opposition. Bandar does not say that he is going to drastically change the balance of forces; No, he only needs to overthrow the "Syrian regime." At the same time, Bandar complains that the weapon he sends to the opposition often ends up in the hands of al-Qaida fighters.

Iranian channel Press TV cites the opinion of Professor Rodney Shakespeare, in a comment about the "deal" who called the Saudis simply bankrupt - in moral and political terms.

Americans can at least talk about freedom and democracy (while in fact they support autocracy, lead wars and kill every day), but the Saudis have nothing to talk about. They have no vision, no principle, no idea - no foundation. Saudi Arabia is based on the whip and the sword, and weapons are supported by totalitarianism. And this state is doing the only thing that rich people who live outside of morality always do: they offer money to make others do what they want.

The professor notes that Prince Bandar is a strong supporter of the United States and Zionism, and he makes it clear that with the fall of Assad, Syria will be "completely" in the hands of the Saudis. The victory of the opposition in Syria is the bloody dream of the Saudi prince ...

To summarize The Russian and Saudi authorities did not confirm and did not refute the initial report of Reuters on a proposed $ 15 billion “deal”. Today, the media are full of all sorts of guesses about what was and was not.

But in one, almost all experts agree: Russia will not “give in” Assad to the Saudis and the West.

Observed and translated by Oleg Chuvakin
- especially for topwar.ru
Ctrl Enter
Noticed oshЫbku Highlight text and press. Ctrl + Enter
We are
Is the prince in Yemen dead or dying of a heart attack? How the Emirates got involved in the war"Non-Arab Emirates": migrants in the Gulf countries
119 comments
Information
Dear reader, to leave comments on the publication, you must to register.