How not to punish Putin ("Foreign Affairs", USA) 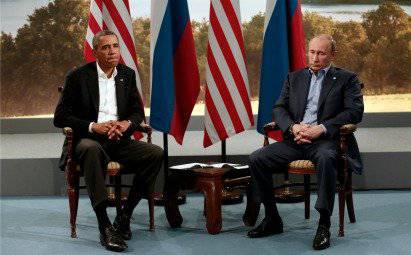 Given Putin’s political vulnerability, an open clash with the West because of the rights of homosexuals and Edward Snowden, which has become inevitable due to Washington’s cancellation of the summit of the American and Russian presidents, this is exactly what the Kremlin needs. The West should narrow its criticism of Russia, focusing on those issues on which its views coincide with those of the Russian people.


Punish Putin! Today it has become a general insanity. When Moscow provided temporary shelter to ANB secrets whistleblower Edward Snowden, US Senator John McCain proposed expanding the Magnitsky list, which includes Russian officials who are banned from entering the US, and speeding up the deployment of an anti-missile defense system in Europe and immediately admit Georgia to NATO. British actor Stephen Fry and numerous LGBT activists advocated a boycott of the Sochi Winter Olympics in 2014 in protest against Russia's recent actions against gays and lesbians. According to media reports, gay bars in the United States began to get rid of their stocks of Stolichnaya vodka.

But the most important event happened on Wednesday, when US President Barack Obama canceled a meeting with Russian President Vladimir Putin, which was to be held in September in Moscow. At the same time, he, among other things, expressed his displeasure at the provision of asylum to the Kremlin by Snowden.

Indignation at Russia's actions is quite understandable. Snowden is accused of committing serious crimes, and Washington is naturally interested in bringing this man to justice. The recent law to ban “propaganda of homosexuality” in Russia has created an atmosphere of aggression, in which intolerant citizens attack Russians of nontraditional sexual orientation and post horrible images of violence against them on the Internet.

But before you rush into battle, those who want to punish Russia should think about two points. First, why does Putin behave in this way? And secondly, will these sanctions harm Putin or benefit him? Given that Putin is currently fighting for political survival, a public confrontation with the West will help him stay afloat. Therefore, Americans and Europeans who wish to change the course of Moscow should act carefully and carefully so as not to play along with Putin.

Back in 2012 for the presidency, Putin brushed aside all the reassuring conversations of former President Dmitry Medvedev about modernization. Thus, he exposed the contradictions within Russian society and in the ruling circles of the country. The president has lost the support of Russia's intellectual and cultural elite, as well as a significant part of the business community. His popularity ratings, which have exceeded 60% in recent months, create a deceptive impression of stability. We can expect a decrease in this rating, since it is closely related to the economic indicators of the country, and they have recently begun to deteriorate.

In such a situation, the Kremlin, conducting its campaign of enacting repressive laws, carrying out investigations with intimidation of the accused and speaking with anti-American remarks, has two objectives. First, he wants to intimidate and bring back into operation the administrative elite, which, under Medvedev, began to allow itself any liberties. The second goal is to drive a wedge between the liberal opposition, which is concentrated mainly in Moscow and St. Petersburg, and its remaining supporters in the more conservative and traditional provinces. On both fronts, the West, by its actions, can either complicate or facilitate the achievement of these goals to Putin.

The Kremlin, with its shameless homophobia, follows a simple political logic. As for gay rights, Putin is on the side of the Russian majority, while many of his liberal critics do not. As for LGBT rights, then in Russian society today there are practically the same mood as in the American one thirty years ago. When World Values ​​Survey asked Russian respondents in 2006, whether homosexuality is acceptable, 66 percent of respondents answered negatively. In 1982, exactly the same number of Americans gave the same answer to this question.

With the changing attitudes of the West, it is becoming increasingly difficult for American and European politicians to exploit homophobia. But in Russia, the situation is different. Since the central squares of Moscow filled 2011 in December with crowds of anti-government protests, Putin has begun to focus on sexual issues. In his first public comments on the demonstrations, he stated that he mistakenly took white ribbons for the condoms that the protesters wore. The goal was to create a sense of awkwardness when Russians think of democratic activists. To the extent that Kremlin PR people are able to portray the protesters as a culturally alien element, Putin succeeds and wins. His worst nightmare is that Moscow and the provinces will unite and oppose him on issues such as economic performance and corruption.

The boycott of the West Sochi Olympics may serve some purposes outside of Russia. He will show gays and lesbians in the West that the attitude towards them is respectful. In theory, he can also discourage populists and dictators in other countries from using hate for their own purposes. But such a boycott is unlikely to improve the plight of homosexuals in Russia. Putin's PR leaders will present such a boycott as a slap in the face not only to the Kremlin, but to the whole of Russia, and portray it as an arrogant attempt by the West to impose their postmodernist values ​​on Orthodox society. Such an intercession from the side will ultimately lead to the fact that Russian citizens from the LGBT community will seem to be even bigger strangers.

Recall the recent scandal with Pussy Riot. A campaign of international pressure was conducted with celebrities such as Madonna and Paul McCartney. But they did not achieve leniency for the performers who were left behind bars. But Putin, who was in an extremely vulnerable position, managed to restore the balance of power. Before the arrest of Pussy Riot participants, Moscow was swept by popular anger and discontent over the “stolen”, as many believed, elections. Suddenly, all conversations were transferred from voting rights to the right of feminist groups to speak without invitation in Orthodox churches.

In the Snowden case, the threats and sanctions of the West help Putin more than harm him. The Kremlin may point out that the United States refused to sign an extradition treaty with Russia, and that Washington is applying double standards. It is hard to imagine that Americans are deporting a Russian intelligence officer who arrived in New York after exposing the actions of his former superiors to secretly eavesdropping conversations of Russian and foreign citizens.

In such a situation, the reading of condemnatory notations to Putin for the fact that he did not betray a man who exposed the possibly illegal actions of the American spy agencies would only increase the president’s popularity among Russians. And the requirements of the West to expand transparency seem pure hypocrisy. If Putin had succumbed, he would have looked like a spineless leader.

What pressure is correct

On the whole, to punish Putin for inciting homophobia and harboring the whistleblower of American secrets is to strengthen his position in the domestic political struggle. But there are issues in which it is much weaker. If the West wants to put effective pressure on Russia, it should focus on those areas where its values ​​and priorities coincide with the values ​​and priorities of Russian society.

First of all, Western countries should speak more actively and convincingly about the unjust and politically motivated use of the judicial system in Russia. Most Russians feel insecure from the whims and whims of immoral and corrupt judges who pervert laws, ignore evidence and evidence in order to imprison critics of influential politicians or deprive the property of honest businessmen. The conviction of the opposition leader and anti-corruption blogger Alexei Navalny for embezzlement as a result of a trial that was marked by procedural irregularities is just one recent example of abuse by judicial authorities.

Meanwhile, Russians across the country have already become familiar with the tricks that have become a characteristic feature of the election under Putin. Western countries are in a position to find differences between those leaders who were elected more or less honestly, and those whose election was accompanied by credible reports of fraud. After that, they will be able to exclude such dishonestly elected officials from the delegations invited to events organized by the West.

Of course, Putin will condemn such measures, calling them foreign intervention. But since condemnations and accusations from the West will find a response from ordinary Russians in Moscow and the provinces, confirming their beliefs and discontent, they will cause real harm to Putin, and not strengthen his position.

One of the Western sanctions, which caused undoubted irritation among the Kremlin elite, is the “Magnitsky list”. The law adopted within its framework prohibits certain Russian officials from entering the United States, and also requires them to freeze their accounts in American banks. European countries should consider adopting similar laws in order to deprive officials involved in violation of laws and electoral procedures of the right to travel to Europe and to own property there.

The West cannot accelerate the development of civil society and democratic politics in Russia. This can only be done by the Russians themselves. But the West is able to intensify the split between the corrupt elements of the administrative elite, gradually convincing ordinary Russians that it is on their side in the struggle to improve the system of government.

The effectiveness of Western measures will depend not only on the issues put forward in the spotlight, but also on the time they are put forward. There are some indications that the Kremlin's repressions that began last year are running out of steam and are waning. The attempt of Moscow Mayor Sergei Sobyanin to gain legitimacy through victory in fair elections suggests that there are still people in the highest echelons of power who want to do the right thing. At the same time, the deterioration of economic indicators reinforces the need to improve the business climate in order to ensure the resumption of growth.

Although the West criticizes Russia for its flagrant abuses and violations in its judicial and electoral system, it will have to pragmatically cooperate with Moscow on key issues of mutual interest. These are arms control, Syria, Iran, North Korea and so on. These topics are simply too important for the United States to refuse to negotiate with the Russian leadership. In fact, for the most part, these problems for Washington help Moscow more effectively than for Russia the assistance of the United States.

The main issue causing controversy between the West and the current Russian leadership is not whether it adopts homophobic laws, opposes Georgia’s membership in NATO or refuses to deport Snowden. The key problem is that Russian leaders have largely abandoned open and adversarial policies, governing a state without accountability. By taking action against the officials most involved in such violations, the United States and Europe will effectively punish Putin and push Russia in a democratic direction.

Ctrl Enter
Noticed oshЫbku Highlight text and press. Ctrl + Enter
We are
Geopolitical Mosaic: Jesse Ventura will become US President in 2016, and Putin will turn Europe into RusropWar Lists: Putin - in the "Magnitsky Act"!
Military Reviewin Yandex News
Military Reviewin Google News
136 comments
Information
Dear reader, to leave comments on the publication, you must to register.