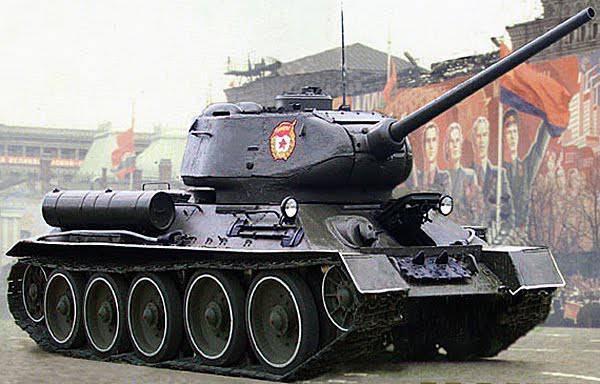 Democratic Russian media around the clock insist that the Russian people are backward, second-rate, inferior, incapable of anything serious in science and technology, and the task of Russia now is only to wade in the wake of world civilization and try not to far behind the developed capitalist countries.


And our young people believe them because they have no idea about the life of an ordinary person in the Soviet Union, about the technical, scientific and social achievements of the Soviet government and Soviet society. They really believe that the Soviet medium tank T-34 is a converted American tank, we borrowed a Kalashnikov machine gun from the Germans, and we stole an atomic bomb from the Americans, and space rockets from us are copied German designs of their latest V-3 and The FAU-4 captured by us in one of their missile centers in the Baltic.

I constantly have to communicate with modern Russian youth. And I am amazed at her absolute "ignorance" stories his country of the twentieth century. Therefore, I gave them a lecture about the Soviet contribution to world civilization.

The students were in real shock. They did not know that Soviet civilization had such tremendous achievements in the technical and social development of the world. Although I told them only what has been preserved in my memory since Soviet times, when I worked for over fifteen years as a freelance expert at the All-Union Scientific Research Institute of the State Patent Examination or VNIIPGE, and did an examination of applications for inventions. And for this I had to be sure to keep abreast of the latest technical developments in the world. I present an excerpt from this lecture to your judgment.

TECHNICAL ACHIEVEMENTS OF THE SOVIET NATION OF WORLD VALUE

1.Tank T-34. This tank is recognized as the best medium by the entire world community. a tank Second World War. And nobody succeeds in silencing this outstanding achievement of the Soviet military-industrial complex.

2. Tank HF. Even the Germans themselves recognized him as the best heavy tank of the first half of the Second World War and which the Germans could not knock out of one of their anti-tank guns. They equated their chances in heavy tanks only with the release of their heavy tanks of the Tiger and Panther series.

3. Tank IS-2. The best heavy tank of the end of the second world war, with which even the fascist "Tigers" of all modifications could not compete. Reluctantly, this fact is recognized by most foreign experts.

4. Fighter Yak-3. The best lightweight fighter of the second world war, according to many foreign experts. In their tactical and technical qualities superior to any fighter of the time.

5. The Soviet atomic bomb, which we made in just two years from nowhere, is practically empty. You can say a lot about the fact that we supposedly took the atomic bomb project from the Americans. Speak, if you have nothing more to do. Paper with drawings is one thing, and a finished object in the form of a nuclear charge is completely different.
Now atomic charge drawings can be taken on the Internet. Take it and do it! Who's stopping you ?! However, nothing happens. Because for its manufacture it is necessary to create an appropriate scientific technical and production base. And this base had to be created in a war-ravaged country. And the Soviet people under the leadership of the Soviet government and their Communist Party created such a base. But for some reason there is no monument to this unprecedented feat of the Soviet people.

6. The hydrogen bomb, which we made the first in the world, ahead of the Americans themselves, who began to work on it much earlier and worked for almost ten years. And we got it in the forty-ninth year on the land devastated by war. What kind of powerful potential did Soviet civilization have if it turned out to be capable of such impossible things ?!

7. The world's first nuclear power plant in Obninsk. As a model of the peaceful use of the atom. The Americans did atomic bombs and nuclear submarines, but we now took, and with the help of the atom we launched our power station, ahead of America, rich, fat and never fought on its territory.

8. The world's first nuclear-powered icebreaker. Another example of a peaceful Soviet approach to the use of nuclear energy on earth.

9. The world's first satellite of the earth. It was a terrible blow to the prestige and psychology of Americans. And they considered this Soviet success an accident.

10. But then followed the world's first launch of higher-class living beings into space, the dogs Belka and Strelka and their return to earth.

11. And then something happened that Americans still cannot forgive us. The world's first cosmonaut, a citizen of the Soviet Union, Yuri Gagarin, appeared. It was then that the President of the United States uttered his famous words: the Russians defeated us in the competition for Cosmos at the school desk. And it is this, the best education in the world, that the current Russian radical democrats have been actively destroying for the last two decades.

13. The first pennant from the earth, delivered to the moon and left there forever, as a symbol of the triumph of the Soviet Socialist system on this earth.

14. The world's first moving vehicle, the so-called lunar rover, delivered to the moon and for many months moving on the surface of the moon and transmitting images of the moon to the earth.

15. The world's first orbital space station, rotating in orbit around the earth, with interchangeable astronaut crews working on it for several months.

16. The first in the world reusable spacecraft called "Buran", launched from an orbital aircraft and returning to earth in automatic mode. Outstanding Soviet space achievement, then thrown out on the instructions of the US STATE DEPARTMENT of the new owners of Russia in a landfill.

17. The first in the world super-high, the so-called Ostankino television tower, built on an unusual and extremely safe domestic project.

18. The best in the world shooting machine, the genius of the Soviet worker, who became an outstanding Soviet designer, Mikhail Kalashnikov. In present-day Russia such as he, no one, except a loader on the market, could ever get a job.

19. The most massive in the world semi-automatic welding of metal structures in a protective gas environment with a consumable electrode and now called Russian welding or carbon dioxide welding.

20. Automatic welding of metals under the flux, with which we in the Second World War welded tank hulls in the "Tankograd" in the Urals.

21. Automatic welding of metal of unlimited thickness, the so-called electroslag welding, which in Soviet times was widely used in the manufacture of large body parts for various purposes weighing up to several thousand tons.

22. One of the most popular ways of producing high-alloy steels with desired properties, now called electroslag remelting.

23. Mastering the mass production of multilayer twisted pipes for high pressure gas pipelines, butt-welding of which, when installed in the field, is now carried out according to the method proposed by the author of this article.

24. Mastering the production of brazed instead of welded metal masts high-voltage gear.

25. Mastering the production of the world's largest converters for smelting steel with a capacity of over five hundred tons.

26. Mastering the production of converter steel with a purge of liquid melt with oxygen instead of air.

27. The introduction of a single energy system in the country, the only one in the world for such large states. In America, it is still not there, but we have it! More precisely - it was! Mr Chubais and his friend Yeltsin destroyed it.

28. A single geological map for the whole country, according to which it is still possible to predict the location of various mineral resources. There is still no such card in any major country of the world.

29. The first in the world installation for controlled nuclear fusion of type TOKAMAK

30. The first in the world mobile installation for launching ballistic missiles on the basis of railway cars, which has no analogues in the world so far and which we have destroyed at the request of the US Department of State in the commemorative nineties.

31. The world's first nuclear submarine with a two-layer welded hull, capable of operating at depths of over six hundred meters.

31. The world's first nuclear submarine with a welded hull of titanium, capable of diving to a depth of up to a thousand meters.

34. The first aircraft in the world with a variable wing geometry, which caused a sensation at the Le Bourget parade at the time.

35. The world's first plane with vertical lift and landing.

38. In general, we must admit that forty-odd percent of the global passenger aviation in the second half of the twentieth century were equipped with Soviet aircraft.

39. The first in the world "ekranoplan", a kind of flying hybrid of a naval ship and a plane that was tested in the late eighties and which has no analogues so far in the world.

40. The world's first giant transport aircraft capable of transporting over 250 tons of payload by air.

41. The world's first ship on hydrofoils.

42. The first in the world contact butt welding of large-sized bodies of diesel engines of diesel locomotives and marine vessels.

43. The first in the world industrial contact butt welding of pipes of main pipelines in field conditions.

44. The first and only carousel in the world for processing hydroturbine housings with a faceplate diameter of fifteen meters.

46. The world's first heavy-duty dump truck with a payload of 850 tons for coal and iron ore deposits in southern Yakutia.

47. The only country in the world that produces high capacity walking excavators with a bucket capacity over 150 cubic meters.

48. The only country in the world that produces floating dredges of great power for the extraction of gold and rare-earth minerals from the bottom of rivers.

All that I have called here is just what I immediately thought of and what can be said right away, without thinking, and about which almost every technically literate and technically inquisitive Soviet person was aware. Much has been written about these achievements of ours in the magazines Tekhnika Vodya, Knowledge and Strength, Science and Life, Young Technician and in a number of other periodicals of the Soviet Union, with millions of copies published. And which we now have in the country. They were replaced by countless glossy magazines with half-naked and very naked girls.

And for sure I missed something and apologize to my readers for that. But if anyone has any additions to this list of mine, I will accept them with great pleasure!

This suggests an elementary conclusion from which one cannot get anywhere, even if he would like to. The conclusion is the following: In its development, the Soviet Union was at the forefront of world technical progress and its contribution to the development of human civilization is extremely large. That is, the Soviet state system proved to be an order of magnitude more effective than the capitalist one. Despite its natural costs and three terrible wars, swept through our open spaces.

Ctrl Enter
Noticed oshЫbku Highlight text and press. Ctrl + Enter
We are
About Stalin and KhrushchevWhat you didn't want to know about England
Military Reviewin Yandex News
Military Reviewin Google News
215 comments
Information
Dear reader, to leave comments on the publication, you must to register.