August 12 2013
6
A team from the American University Lehay is engaged in the preparation of a large unmanned aerial vehicle, which is designed for continuous flights. Back in 1883, Nobel Prize winner John Strutt, as well as physicist Baron Releigh, put forward one radical idea. John Strutt studied the flight mechanics of birds, in particular pelicans, and suggested that birds scooped energy for flight from the difference in wind speeds, which in turn allowed them to soar in the sky without flapping their wings. Using such a flight technique, which received the designation of dynamic soaring, the aircraft could, at least theoretically, fly practically without using fuel for many weeks, months, and maybe even years.


Dynamic soaring is a soaring method in which the flight altitude is maintained by constantly changing layers of air with excellent horizontal speeds. Areas of significant wind speed gradients are most often found in any kind of interference with the flow of air or at the surface of the earth. This method is often used by birds. Most often they are used by seabirds that hover above the ocean waves, using very little energy for flight. Particularly experienced in the application of this method are albatrosses, who with the help of dynamic soaring can travel for many thousands of kilometers. Gliders in turn rarely find such gradients at high altitudes.

Dynamic soaring is based on the fact that the wind speed in each subsequent layer is higher than in the previous one. For example, a strong wind speed at a height of 1 meter is 10 m / s, but if you rise to a height of 10 meters, the wind speed on it will increase 1,5 times. This phenomenon, which is especially noticeable above the water surface, is very actively used by large birds: sea and ocean birds. Initially, they rise to the upper layers of air in order to stock up on the necessary inertia, after which they perform a loop, returning to the lower layers of air at a higher speed. At the moment of repeating the cycle, the birds or any of their artificial analogues accelerate even more. 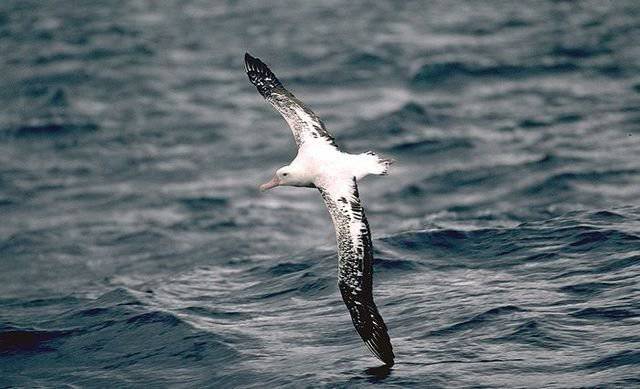 For dozens of years, the work on dynamic hover has been moving very slowly. Operators of radio-controlled gliders used the advantages of this technique in order to increase the range of flights, but scientists did not know whether this knowledge could be applied to larger aircraft. Despite this, in 2006, a team of engineers, which consisted of NASA members and the United States Air Force, made a long flight on a modified L-23 Blanik glider over Edwards Air Force Base, proving in practice that a sufficiently large aircraft is able to apply the dynamic-hovering technique.

It is worth noting that modern gliders often enough and have long been using bird tricks to accelerate and climb. For example, in 2005, the NASA Flight Research Center. Drydena launched a glider with an autopilot that was able to hold out for a full hour in the sky longer than usual due to the fact that it was catching rising currents of warm air (the so-called static soaring). And in 2009, a relatively small radio-controlled aircraft was able to accelerate to 630 km / h, thanks to the use of the dynamic soaring method.

Currently, a team from Lehigh University, led by engineering professor Yohim Grenstedt, is working to improve the concept of dynamic soaring. They are trying to create a large unmanned aerial vehicle that is intended for continuous flights. Not so long ago, they completed work on the creation of an 7-meter wing, made of carbon fiber and designed to perform flights in jet air streams at an altitude of more than 6 kilometers. This model must withstand overloads up to 20 G (dynamic soaring causes serious loads on the wing of the machine), as well as speeds up to 480 km / h.

Later in 2013, this team of researchers is going to test technology with a model of a glider at a low altitude. In the event that these tests are successful, Grenstedt notes, they are going to launch their aircraft, called the Jet Streamer, into a jet stream in which the wind speed can reach 320 km / h. As soon as the aircraft engineer manages to get rid of the load of fuel and power plant, flights in the sky can turn into something completely new.

In the distant future, dynamically floating aircraft can become observational platforms that will be able to observe wild animals, people, or the weather. They can also serve as communication transmitters, retransmitting cellular or television signals. In addition, they will even get the opportunity to travel at very high speed over long distances.

How it works: Dynamic soaring is based on the difference in wind speed

1. The glider rises, overcoming the layers of calm air at low altitude to the higher and turbulent layers of air with its nose to the wind.
2. The glider maintains its own ground speed as it passes through the air flow. Headwind gives it a higher flight speed and generates more lift as the wind moves across its wings.
3. Having made a turn, the glider hovers down, overcoming significant distances.
4. After leaving the windy layers of air, the glider is taken back in order to repeat its maneuver. As long as there is a difference in wind speeds, this cycle can be performed an infinite number of times.