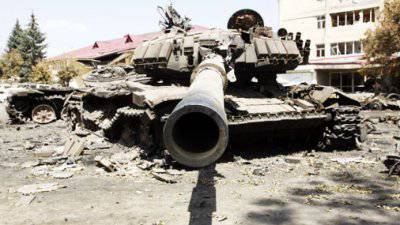 This is exactly what one wants to breathe a sigh of relief after reading in succession a couple of three headlines that (Finally!) Western political masters have deigned to hear the conclusions of their loyal and helpful experts from possible commissions on the “study” of such an arduous issue as the origins, the causes and consequences of the conflict of 2008, which arose in August, and, wisely nodding with the wisest high heads, agreed that - yes! - not Russia became the initiator of hostilities.


Mostly, of course, it is not the phenomenon itself that is studied as such (a not so grandiose event took place), but the reasons and degree of guilt of one or the other side. And if for all citizens of Russia (except perhaps for the protest-preoccupied electorate) - the question is clear, as it is a clear day, then it took a good five years for Western experts with wise experience. How so? It is necessary to contrive black to present as immaculately white and to manage to justify it so that the evil created by a narcissistic paranoid who imagines himself a Caucasian Führer does not look like mean aggression against a small nation, but as a sweet emotional flash of a hot Georgian guy named Misha. But what followed after this outbreak was assessed in Russia and what was answered to this is “inadequate use of force”, “not a symmetric answer” and “despicable aggression”. I repeat, these are epithets from the reports of all the same experts and analysts who did not have the courage to tell the whole world that all these tragic and inhuman actions against the civilians of South Ossetia are the essence of the inflammatory actions of the Western political establishment obediently marching for the boss.

In order not to be unfounded, I will cite several headlines that received a louder sound precisely on the sad anniversary of those events.
London has softened the tone in the August 2008 conflict assessments in South Ossetia,
German experts admitted that Georgia has unleashed the war in South Ossetia, etc.
Should I list them all? Any of you, if you wish, will pick them up on the Internet in ten minutes or thirty minutes. Not in the number of such headlines, but in the tendency to distort the very latest History, Colleagues! But when you read such headlines and, when you see the verbiage of Western politicians in the texts of these articles, you clearly see the desire of these truth-seekers to settle in our heads a guilt complex for everything we have done. So that as soon as we saw such words forgiving our sins, we should sigh with relief, “Glory to those! The highest pardon condescended! ”

We must pay tribute to "our Western partners," they successfully learned the lessons of the decades after World War II. They perfectly understood the power of words and convictions that helped the USSR to survive in that slaughter and win the greatest victory in history. Understood and adopted. After decades of the post-war USSR, right up to the time of its collapse, we lived in full conviction that the victory in the Second World War of our state put everything in its place and the peoples who suffered from the atrocities of the Nazis, their vassals and allies fully realized who brought to Earth evil and who made the greatest contribution to the victory of Good over Evil. Needless to say - this, according to the rules of good tone, should have caused at least an elementary feeling of appreciation and memory of it. But those who ruled the policies of the coalition countries did not think so. And they, elementary, began to fear the power that the Union forged during the years of the Great Patriotic War. They were frightened and the curtain fell, so that their people would forget about this merit and these victims of the Soviet people. And it happened. But those crumbs of memory that remained are too much for Western ideologues. And the time has come to engage in the perversion of the facts of History, which we see today.

Russia, as a successor to the USSR, is trying to blame almost for unleashing World War II, and, accordingly, to lay all the blame on it for the misfortunes and misfortunes that this war brought to the planet. And who is to blame, he pays. Not necessarily with money, but also (which is even preferable in new political and economic realities) by territories and resources.

That's the whole truth for the mercenary. Polish revanchists and Baltic nationalists are especially cynical in this regard. Those are naughty, cynically and brazenly, at every opportunity, beg for money, hiding behind the guise of the most affected and disadvantaged. Well, the "masters of big politics" can not afford so poorly and straightforwardly to squeeze someone else's - not by status. So the strategy of turning the History has such a powerful impulse.

But this is with regards to the affairs of bygone days. But soon today's affairs will become History and they will require “historical” justifications. And where to get them? Yes - write! After all, this is “elementary, Watson”!

So today we are witnessing "historical events" - attempts by the West to change the History for themselves. And is it any wonder and indignation? No - not worth it, friends. You just need to remember that proud silence today is not in high esteem. Strong, fair, and therefore right, today is the one who does not hesitate to speak proudly of his successes and whose deeds do not disagree with words. Today, Russia in many areas in full voice declared its rights, its principles and its capabilities. And more and more people on Earth see and understand this. This can be seen not only along the course of events in Syria, but also by the reaction to certain internal laws in the Russian Federation. This is a ban on the promotion of homosexuality, and laws and actions aimed at protecting the rights of children. The other day on the Internet there was information about the treatment of Finnish and Norwegian mothers to the Russian children's ombudsman P. Astakhov to protect their children from the “care” (which more and more resembles the methods of a fascist state) of their states. This is what needs to be remembered, and this is what you need to feel free to talk about.

As it was noted recently in one of the online publications (I cite the meaning, not literal) - “Of course, there are problems. And they can not be silent and let's discuss and solve them. And about fantasies about what was once wrong, but better or, that just over the hill is paradise, it’s just shaking the air. ”

Ctrl Enter
Noticed oshЫbku Highlight text and press. Ctrl + Enter
We are
About Stalin and KhrushchevWhat you didn't want to know about England
28 comments
Information
Dear reader, to leave comments on the publication, you must to register.