August 8 2013
369
In the world media today, a bomb exploded: from the Reuters news agency, citing anonymous, informed sources from both the Middle East and the West, it was reported that Saudi Arabia had offered Russia a deal to buy weapons worth 15 billion. This deal, very similar to a political bribe, can take place if Moscow refuses to support Damascus in the UN Security Council. 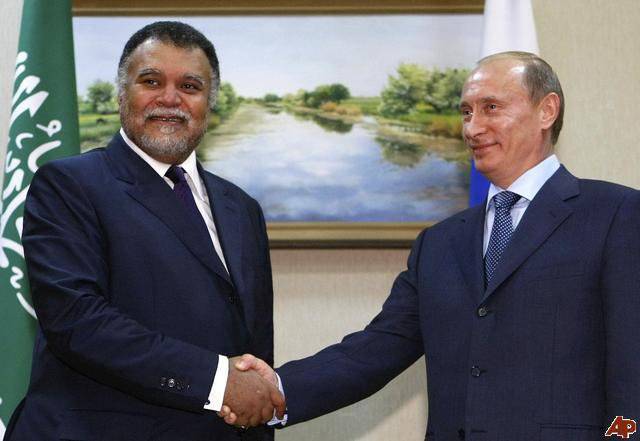 How do Khaled Yakub Oweis and Amena Bakr (Reuters; source of translation - "Inopressa"), sources in the Middle East and Western diplomats said that Saudi Arabia, represented by Prince Bandar bin Sultan, head of Saudi intelligence, offered Russia economic initiatives in exchange for weakening support for the Syrian president. The Saudi prince voiced such a proposal at a meeting with Vladimir Putin in Novo-Ogaryovo last week.

The article says: “Sources in the Syrian opposition close to Saudi Arabia claim that Prince Bandar volunteered to buy Russian weapons worth up to 15 billion dollars, and also to ensure that Persian Gulf gas will not threaten Russia’s position as one of the main suppliers of these raw materials to Europe. "

What is Comrade Putin? The article says on this score: “One Western diplomat working in the Middle East said: the Russian leader is unlikely to change the noticeable status of Moscow in the region that has emerged recently into an arms contract, even if it is very large.”

Kremlin comments on this informational message have not yet followed.

According to the expert of the Center for Analysis of Strategies and Technologies Konstantin Makienko, who leads Alexei Nikolsky (Vedomosti.ru), the conclusion of such a transaction is unlikely: after all, there is no confidence between Russia and Saudi Arabia in the field of military-technical cooperation.

In the mid-2000s, the expert notes, Saudi Arabia offered Moscow an arms deal, starting negotiations on the acquisition of 150 tanks T-90S, more than 100 BMP-3 and more than a hundred helicopters Mi-25 and Mi-17 - totaling more than $ 4 billion. In exchange, the Russian Federation was supposed to stop delivering weapons to Iran. The possible purchase of Buk-M2 and even S-400 air defense systems was also discussed. As for the T-90, the tanks have already been tested in Saudi Arabia, and the Saudi representatives discussed the complete set of Mi-17 helicopters at the MAKS-2009 exhibition.

But the negotiations dragged on and then stopped. Interestingly, this happened after Russia unilaterally canceled the delivery of C-2010 PMU-300 to Iran in 2, unilaterally. It may well be that the Saudis decided to repeat their trick.

Jason Dietz (Antiwar.com) indicates that the proposal of fifteen billion dollars for weapons by Saudi Arabia means an attempt to open bribery: after all, the deal has a condition - concessions on Syria.

However, the journalist notes, there is no indication that Russia is ready to abandon its long-standing alliance with Syria.

Stuart Wiener ("The Times of Israel") notes that the “Lebanese source” told Reuters, allegedly at the end of the four-hour meeting, “the Saudis rejoiced, rejoicing at the results.” However, neither Russia nor Saudi officials confirmed this information. Russia remains a loyal ally of Assad, the Israeli newspaper said.

The unnamed Western diplomat is pessimistic about the likelihood that Russia will give up its influential positions in the region - even in exchange for such a lucrative arms deal. This diplomat told Reuters that Russian officials fear that Saudi Arabia does not have a clear plan to maintain stability in post-Cassadian Syria.

One representative of the Syrian opposition said that the Saudis and the Russians were actively in contact "before the meeting." According to him, Bandar tried to dispel two main fears of Russia: that Assad will be replaced by Islamist extremists and that Gulf countries will pass through Syria, which will deal with gas supplies, of course, to the detriment of Russia. Among these countries was called the notorious Qatar.

To summarize Even if there was a similar proposal (about 15 billions), Russia would not make a deal. For a very simple reason: Russia, instead of a political person, in that case would have something else. And Libya is not an example here for comparison: after all, Russia has been vetoing the Western resolutions on Syria in the Security Council for two years now. As for Iran, those C-300 modifications, which are called “Antey-2500”, may well go there.

The attempts of the Saudis say that Assad in Syria successfully defeats the enemies. That is why the Gulf states, together with their Western patrons, cling to any microscopic chances, trying to turn back the time - in those days when it seemed that the “regime” of Assad was not long. But time does not turn. Assad will win, Russia will not give the nod to the invasion of Syria, and the Islamist interventionists will be expelled from there.

Observed and translated by Oleg Chuvakin
- especially for topwar.ru
Ctrl Enter
Noticed oshЫbku Highlight text and press. Ctrl + Enter
We are
Iran in the Syrian conflict. The confrontation with Saudi Arabia and the interests of the ShiitesSyria: Americans scare themselves, and Asma Asad buys chairs
369 comments
Information
Dear reader, to leave comments on the publication, you must to register.