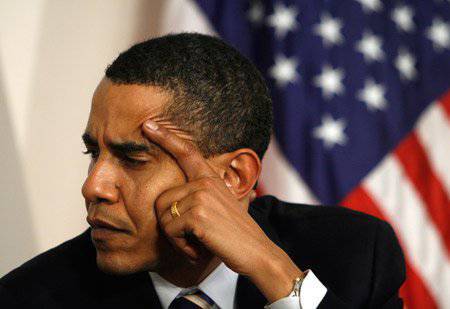 The President of the United States razgodilas on the president of Russia: he decided not to meet with him either in Moscow (he would not go there at all) or in St. Petersburg (he would go there, but he would not meet with Putin). On the eve of the refusal, Obama confirmed his decision to participate in the September G20 summit in St. Petersburg, and at the same time expressed disappointment that Russia had provided temporary asylum to Edward Snowden. Probably, Mr. President thought his move like this: I will fly to Russia, and, therefore, relations between the countries will not deteriorate. On the other hand, I will not meet with Putin, which looks like a decent answer about the Kremlin’s “slap in the face” that Republican senators are annoyingly talking about.

The other day Barack Obama confirmed his intention to participate in the September G20 summit in St. Petersburg. Reported by correspondent RIA "Novosti" Alexey Bogdanovsky with reference to Reuters. True, the US president did not specify whether he would hold a bilateral meeting with V. Putin. (He must have just thought about that.)

Speaking on NBC, Obama said he was disappointed with Russia's decision to provide temporary asylum to Edward Snowden, but this would not affect his decision to attend the G20 summit.

The US President said further that he did not see the reasons that would prevent his country's cooperation with Russia with better quality. Obama remarked: “There are times when they roll back to the mindset and mentality of the cold war.” But I tell President Putin that this is all in the past, and that we should think about the future. And there is no reason why we cannot cooperate more effectively than we do now. ”

Obama is deeply mistaken about the slide to the “cold war”. Or he doesn't know at all history (which is quite typical for a Harvard graduate: remember Bush Junior, who also studied at Harvard and did not know where Iraq is on the world map), or deliberately puts everything upside down.

As told "RT" journalist and expert Dmitry Babich, the situation with Snowden repeats the scenario of the times of the Cold War, but only now Russia and the United States have switched roles. Russia is hiding a man who has spoken the truth, and the United States is pursuing him. That is what causes the wrath of Washington.

Right. From this and Obama, and even more hawks Republicans, and rage. Now Russia, sheltering Snowden, is fighting for freedoms and human rights, and the United States is violating these very rights and freedoms. An informant with a temporary Moscow residence permit has become a real geopolitical weapons, and in the White House and Congress, they are well aware of this. In essence, Snowden is a figure in a political game, perfectly demonstrating the double standards of the United States. Both Obama and hawks like McCain cannot but understand this.

By the way, about McCain. When it became known in the evening of July 31 that Snowden received temporary documents and left Sheremetyevo, Mr. Obama did not find any words in response to the actions of the Federal Migration Service of Russia, but McCain did not say a word. His saying leads "BBC":

“Today’s decision of Russia is an outrage, the purpose of which is to humiliate the USA. This is a slap in the face to all Americans. It is time to radically reconsider our relations with Putin's Russia. ”

This is not all.

Correspondents progressive British newspaper The Guardian A. Lun, L. Harding and P. Lewis provide details of the senator’s statement. It turns out that McCain also put forward a number of proposals against Russia: he proposed to expand the Magnitsky list, insist on Georgia’s admission to NATO and implement the US missile defense program in Europe.

It remains to be seen whether the White House will implement the program of Mr. McCain and his associates like Lindsay Graham, or Obama is a little more independent than it seems.

As previously noted Yevgeny Shestakov ("Russian newspaper"), the question of B. Obama’s trip to Moscow acquired for him an internal political character. If the American president refuses this visit, he will demonstrate the weakness of his own positions inside the country and his dependence on the opinions of members of the Republican Party (in particular, on the opinions of D. McCain mentioned above).

In addition, the observer notes that when the president of a country that Russia calls its partner refuses to visit Moscow, this can not but affect Russian-American relations for years to come.

However, Obama, as mentioned above, believes that "there is no reason why we cannot cooperate more effectively than we do now." Still, he will fly to the summit. He does not want him, the ideologist of the "reset" (which, if we recall the inscription on the button: peregruzka, really turned into an overload - for Washington), to spoil relations with the Kremlin.

And yet there will be no meeting in Moscow.

According to "Lenta.ru" With reference to the Associated Press, Barack Obama canceled a scheduled meeting with Vladimir Putin. The reason for the cancellation of the negotiations was the contradictions that arose between Russia and the United States because of Snowden. At the same time, the White House expressed dissatisfaction with the tough stance of the Russian authorities on other issues, including the deployment of the US missile defense system.

Washington also explained that Obama will come to St. Petersburg for the G20 summit, but will not meet face to face with the Russian president. Instead, the American president will visit ... Stockholm.

“The president and his entire national security team wanted the decision on the Moscow summit to be made on the merits, and we examined the feasibility of the summit in the light of a number of issues and problems that we faced. We decided that it does not make sense to hold a bilateral summit in Moscow in September, ”Karni quoted as saying. correspondent RIA "Novosti" Alexey Bogdanovsky.

Carney noted that disagreements over Snowden were only one of the reasons for canceling the meeting.

“Russia has made a disappointing decision. But we felt that this was not the best time for the summit, for various reasons, ”said Carney. According to him, Washington is committed to cooperation: “I would say that we have an important relationship with the Russians. We communicate with them on various topics, and over the years we have been able to find new ways to cooperate with them <...> Some of this cooperation continues and remains important, including the supply of our troops in Afghanistan, as well as cooperation in other areas. "

With the supply of Afghanistan, by the way, the situation is also not the best way.

Recently, twelve senators expressed dissatisfaction with the Pentagon’s contract with Rosoboronexport for the supply of thirty Mi-8 helicopters for the Afghan Air Force. The amount of the transaction - 572 million. $. American politicians wrote a letter to General Martin Dempsey, chairman of the United States Joint Chiefs of Staff, reports "RT" with reference to the Washington Times.

In the letter, the senators noted that while the Russian company "receives huge funds from the American defense department, it continues to be the main supporter of the monstrous crimes in Syria, supplying Bashar Assad’s bloody regime with weapons and ammunition." The text also says: “Although the Pentagon’s relationship with this company is worrying in many ways, the possibility that American taxpayers are involuntary victims of Russian corruption requires separate consideration.”

Finally, the letter expresses senators ’attitude towards Russia:“ We are concerned that the defense ministry is not able to assess the strategic consequences of obtaining critical military equipment from a potentially hostile power, such as Russia. ”

In Russia, they understand that Obama’s decision is connected with Snowden, and all other explanations, including transparent hints of Russian intransigence, are a weak attempt to disguise the feeling of annoyance that has seized the American president. No wonder: the double standards boomerang missed the target, returned and cracked the hapless starter on the forehead.

As the "Lenta.ru" With reference to Interfax, Assistant to the President of Russia Yury Ushakov said that Washington had proved its unwillingness to build relations with Moscow on an equal basis.

“It is clear that this decision is connected with the situation with the US intelligence officer Snowden, which was not created by us,” said Ushakov.

The presidential aide especially stressed that it was the American side that had long avoided entering into an extradition agreement with Russia, and also refused to extradite Moscow to those who had committed crimes on Russian territory.

To summarize Annoyed and not wanting to show their own annoyance, Obama, who refused to meet with Putin, still sulks not at Putin, but at himself. Offended by his own crooked policy. On the inability of his administration to find a compromise. On their inability to resolve the issue, and not push it to a far corner. The fact that, as a result of the Washington “double standardization”, Russia has changed its democratic places with America - which is already openly written in the Western press.

Blame for all this is not Snowden. And not Manning. And not other public informants. They are just regular gears that jumped out of that loose inertial typewriter, which is a state called the United States, that jumped out and rolled along another road. The trouble with the White House is that it does not recognize the need for change in management — choosing palliatives instead of them like laws about allowing marijuana or “same-sex” marriages to be used. The United States has no drive. Yes, and whether he, he would never get into power: no one should enter there.

Observed and translated by Oleg Chuvakin
- especially for topwar.ru
Ctrl Enter
Noticed oshЫbku Highlight text and press. Ctrl + Enter
We are
Geopolitical mosaic: Estonians offered Putin to take mind, and John Bolton decided to "hurt" Russia and ChinaGeopolitical Mosaic: The Muslim Brotherhood decided that the United States, the European Union and NATO would defeat the Egyptian military, and Bradley Manning would be in prison not 136 years, but only 90
Military Reviewin Yandex News
Military Reviewin Google News
201 comment
Information
Dear reader, to leave comments on the publication, you must to register.