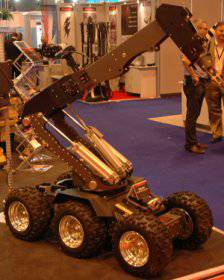 "This innovation research center is already being formed," he said. "A staff of specialists has been approved. At present, the development of a personnel concept is at the final stage."

"We have created the backbone of specialists and several laboratories that deal with our subject matter," continued the colonel general. "In the future, such laboratories will be created depending on scientific tasks and topics related to different types and types of troops."

Referring to the features of the design offices of the Center for Robotics, he pointed out several stages of their activities, including scientific study of the issue, scientific support of the created sample of weapons and military equipment, its transfer to industry and troops for further implementation. “In this context, we have complete mutual understanding with research institutes and enterprises of the military-industrial complex,” Ostapenko assured. At the same time, he stressed that enterprises and institutions working in the innovation sphere in the interests of the Ministry of Defense "will be financed taking into account the tasks that they have identified." "We are capable of solving the tasks for 2020-2025 years that are set for us in terms of providing our troops with robotics," the general said.

"In the 2020 year, the Americans are planning to bring the equipping of their troops with robots - percussion, reconnaissance, security - up to 30 percent," said Ostapenko. "We have a much smaller figure. But one that has all the possibilities for implementation."

Ctrl Enter
Noticed oshЫbku Highlight text and press. Ctrl + Enter
We are
Reports from the militia of New Russia for 26 August 2014 of the yearMedvedev appointed Ostapenko head of Roscosmos
Military Reviewin Yandex News
Military Reviewin Google News
9 comments
Information
Dear reader, to leave comments on the publication, you must to register.