Documents for Oscar Schindler who saved 1,2 thousands of Jews during World War II were put up for auction in the USA 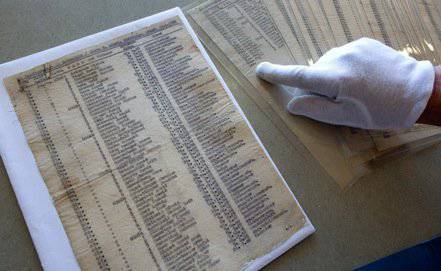 NEW YORK, 8 AUG. / Corr. ITAR-TASS Alexander Bekreneva. The auction in the United States exhibited documents of the German industrialist Oscar Schindler, who in the years of World War II, saved the gas chambers of the Hitlerite concentration camps 1,2 of thousands of Jews at risk to their lives.

Organizes online bidding, which will last until August 14, based on the state of New Hampshire auction house "Art Art" / RR Auction /. As his vice-president Bobby Livingston said on Wednesday, collectors were offered, in particular, a certificate signed by Schindler, dated August 22 1944 of the year. The document, written in German, issued in the name of one of the workers of the factory for the production of enamelled products in Krakow, Poland. This plant, which belonged to Schindler, employed more than a thousand Jews from a nearby concentration camp.

"The worker of my plant, Adam Jidzic, who lives in Krakow, received permission from the main military command in Krakow to unload and assemble military equipment and sent to Sudetengau," the document says.

In the summer of 1944, Schindler found out that the Nazis were planning to close non-military factories. He managed to get permission to restructure the factory in Krakow and transfer it together with Jewish workers to Brunlitz in the Sudetenland / Sudetengau / in the territory of the present Czech Republic. Thanks to the aforementioned certificate, Jijic, one of the leading employees of the plant, was able to proceed with its transfer.

“I first saw a document confirming that Schindler received such permission. I thought that it took him much more time. If he hadn’t received it, Schindler’s list simply wouldn’t exist,” said the Holocaust historian and biographer Schindler David Crowe.

Among the documents put up for sale, there is also another certificate issued in the name of Jijic. “It is hereby confirmed that Adam идidžić, who was born on 28 in May 1922 of the year in Krakow and lives in Kraków, has been working in my company since January 1 1944.

In addition, Schindler's ammunition manufacturing plant in Krakow is offered to collectors. Behind this building were living quarters for Jewish workers.

According to representatives of Art-Art, such documents are extremely rare. The bets on Jijic's information, put up in one lot, reached almost 21 thousand dollars by Wednesday evening.

After the war, Oskar Schindler was left without a livelihood and lived to the last days thanks to the help of the people he saved. Schindler received worldwide fame only after his death, when Steven Spielberg’s Schindler's List film was released on 1993, which was told история his feat. And on the 25 anniversary of the death of Schindler, among his things and documents was discovered the original of the famous list, which was considered to be irretrievably lost.

Ctrl Enter
Noticed oshЫbku Highlight text and press. Ctrl + Enter
We are
April 11 celebrates the International Day for the liberation of prisoners of Nazi concentration campsThe new look of the Dozor combat vehicle in the Polish version
28 comments
Information
Dear reader, to leave comments on the publication, you must to register.