Bashar al-Assad: "There is no other way than terror against the iron fist" 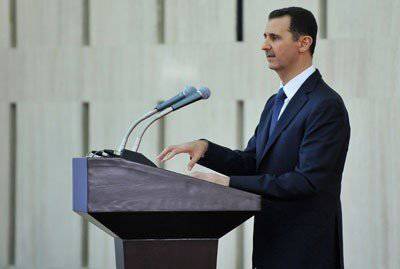 In Syria, Ramadan is coming to an end. Another Ramadan experienced in new anxieties and new hopes ... On the night of August 5, Muslims celebrated Leylat Al-Qadr - “Night of Fate”. According to legend, it was on 27 on the night of Ramadan that the Prophet Muhammad received the first revelation from God, and this night the angels descend from heaven and fulfill desires.


On this night, Syrian President Bashar Al-Assad addressed the nation. “We have before us the only choice - to protect our country with our own hands. At present, there is a struggle between the Motherland and its enemies, between the army and the terrorists, between the people and the criminals. Good comes from all the honest people of the world who support Syria, as well as from the heroes and their families, from the feats of the fallen, who gave their lives in this struggle, ”he said.

The head of state assured that the Motherland does not leave his sons in distress. The country appreciates their exploits. And in these incredibly difficult conditions, when the Motherland is under attack by terrorists and powerful forces that support them, the Syrian army was able to achieve the impossible.
“There is no other way against terror than an iron fist,” he said. - You can not achieve any results in politics when terrorists act. First you need to put an end to their crimes. In parallel, there must be a political process.

Inside the country, the head of state stressed, the army and the people oppose the gangs of mercenaries who kill and destroy the country on the orders of external forces. Terrorist groups consist of criminals and religious extremists, who in fact have nothing to do with religious principles. But there is also a patriotic opposition in the country, which is engaged in political activities and with which it is necessary to conduct a dialogue.

“Besides white and black, there is also a gray color. But if it comes to protecting the homeland, then there is only black and white. White - in favor of the country black - against it, ”said the Syrian leader, adding that there were forces that could not decide and played their part in spreading chaos. Then many of them realized that they were wrong, and returned to the righteous path. But, unfortunately, during this time the forces of evil and terror strengthened, numerous mercenaries from abroad came to their aid.

The main issue is the deadline for the current crisis. As the logic suggests, only the Syrians themselves can end the crisis. He expressed the hope that the next Ramadan Syria will meet in peace and harmony.

"If you turn to storiesone can see that no country, even the largest one, can win a small one that is bound by national unity. “If we do our duty, then God will be with us, and we will inevitably triumph. If we are conscious enough, then with a single hand - white against black - we will be able to overcome the crisis, despite the huge price, ”the president said.

Speaking about the foreign policy situation, Bashar Al-Assad stressed that there are friendly countries, and there are hostile - colonial forces. Some Arab countries, relying on the ideas of Wahhabism, together with the colonial powers, are dragging out bloodshed, participating in the killings of people. But they misjudged the situation: they considered that this was their lucky chance to break Syria, but they faced serious changes on the world stage and the resistance of the friendly countries of the SAR.

The Syrian leader noted that public support for patriotic forces is increasing every day. The army continues to fight terrorists. This war is very difficult. The only way to achieve victory is a people's war, in which the efforts of servicemen and citizens are united. This is what is happening in recent days in Syria, which is why the army is making great strides. The plans of the terrorists have repeatedly failed due to the unity of the army and the people.

The speech of the president was met with hostility by the US administration. A spokeswoman for the US State Department, Jennifer Psaki, accused the Syrian president of allegedly "rejecting the goals of the Geneva communique." Even in such an important document, everyone reads only what he wants. Its main idea - the settlement of the crisis through dialogue, without external intervention - is discarded by Washington. States read in the communique something that is not there - some idea of ​​transferring power to terrorists. That is, murderers, devourers of human flesh, thugs and other scumbags. No legitimate international document can provide for this in principle. And, as the head of Syria rightly said, there is no other way against these terrorists than an iron fist. So it was always and everywhere, and so it will be today in Syria.

Situation on the fronts

"Democratic" media avidly talk about the "victory" of bandits at the Ming airfield in the vicinity of Aleppo. In this case, the link goes all the same famous "Observatory for Human Rights", based in London. More than once it was necessary to write about this “observatory” that its head, the owner of a London diner, had repeatedly lied to the whole world. Then, according to the telephone directory, he compiled a list of “victims of the regime,” who were then alive, then declared that so many people went out to demonstrate against the government that it exceeds the entire population of Syria. It would seem that all self-respecting media is long overdue to send this “observatory” to the scrap. But so far, Western “democratic” ones, and then, unfortunately, the Russian media continue to draw pseudo-information from there.

Broadcasting about the “capture of Ming,” they show footage that supposedly shows that the terrorists seized a lot of equipment, including Tanks. But all these tanks are covered with rust, they are absolutely unworkable. They say this as an outstanding victory, although in fact at the airport there has long been nothing of value - the government has already evacuated everything.

So, the bandits were allowed to enter the base, so as not to lose the soldiers. They managed to pose a little in front of the cameras, but this did not last long. After that, the bearded terrorists from the 9 groups associated with Al-Qaeda were attacked from the air. Losses of gangsters are very high. That's all their Pyrrhic "victory."

The catastrophic situation of the militants in the areas of the "old city" in Homs. Defense Minister Fahed Jassem Al-Freijj arrived in the army-liberated Al-Khaldiya quarter. He met with the servicemen, thanking them for their efforts and for their determination to combat terrorists and protect the Motherland and its citizens.

The minister stressed that the soldiers are doing great deeds, and expressed the hope that Syria, led by President Bashar Al-Assad, will definitely win. “A country with such an army can defeat criminals and murderers,” Al-Freij emphasized.
Currently, battles are fought for another quarter of the same area - Bab Hood. The military took control of many buildings and freed up an impressive territory.

In Damascus, the terrorists tried to organize another assault attempt - on that very “Night of Fate” by the Jobar and Kabun regions. But this attempt was too pitiful, and the army successfully repelled it. The bandits retreated like beaten dogs, suffering heavy losses.

In the north of Lattakia province, in the Jabal Al-Akrad district, militants launched an unexpected offensive and seized several villages. Their goal was to capture the city of Al-Haff. Unfortunately, hundreds of civilians were killed there, which is quite in the spirit of these fascist fanatics. But the gangsters didn’t enjoy success for long - right there the army went to the counterattack. Most of the villages - Kfariya, Beit-Shakuhi, Tell, Aram, Sterba - have already been liberated. Fighting for the town of Salma. Unfortunately, dead people can no longer be returned, and their blood is on the conscience of those who support, arm, and cover up the mercenary killers, claiming that they are fighting for "freedom" ...

Ctrl Enter
Noticed oshЫbku Highlight text and press. Ctrl + Enter
We are
Bashar al-Assad: In Syria, not the “revolution” that the enemies are talking about, but the revolution of the army and the people against terroristsResults of the week. "It's just the flu all together are sick, and one by one go crazy!"
Military Reviewin Yandex News
Military Reviewin Google News
160 comments
Information
Dear reader, to leave comments on the publication, you must sign in.