What machine gun did not even dream of a Russian soldier?

January 26 2011
22
If you ask any soldier who served in the Soviet (Russian) army, what should be the usual army weapon, he either does not understand the question, or he will describe the device of a Kalashnikov assault rifle - a rigid barrel of a certain length with a deadly front sight, a box for firing from his hand, a magazine for a cartridge of a certain caliber and size, a trigger, butt. Upstairs aiming strip. Side switch mode of fire. What is there to understand something!

Well, you can still remember the American M-16, where the front sight is mounted not on the trunk, but the trunk can be replaced by another one, but nothing fundamentally changes. And the fact that the machine gun (rifle) can be completely different, and can not come to mind.

Well, for example, a replaceable barrel that turns a rifle into a carbine, a sniper or a light machine gun, an adapter for a magazine that turns an automatic into a submachine gun, firing pistol cartridges ...

And if there is a store behind the handle with a trigger and the complete absence of a front sight, and a standard sight consisting of an optical tube with a circle and a crosshair, which is enough to catch a human figure and press the trigger? Covering one eye is not necessary for this. There is no fire mode switch either: incomplete pressing - a single shot, full - automatic fire, while the finger presses the trigger. Why am I here thinking out some kind of fantasy ... Can't this be so?

As much as you can!

And this fantasy is called Steyr AUG (Armee Universal Gewehr - army universal rifle), a whole complex of small arms developed in 1977 by Steyr-Daimler-Puch. The company is still alive today, only today it is called Steyr-Mannlicher AG & Co KG.

The rifle, especially its first version of the AUG A1, is really futuristic. Terribly similar to the six-legged alien insect.

By the way, the rifle is called only one of the variants of this weapon complex with an 508-mm barrel, which can be replaced by another in a few moments. On the left side of the block there is a latch that holds the barrel in the receiver, and underneath the block there is a hinge on which the front folding handle is attached to hold the weapon. The same handle is used to replace the trunks. On the muzzle of the barrel is a slit flame arrester.

Designed by talented Austrian gunsmiths according to the Bull-Pup scheme, in which the magazine and gate unit are located behind the trigger and fire control knob, Steyr AUG became the “de facto” standard of military weapons for a small non-warring country. It is suitable for both military and police and special anti-terrorism tasks, generally showing itself to be a reliable and unpretentious weapon in practice. And the subsequent modernization even more "entered" this rifle in the global arms market. 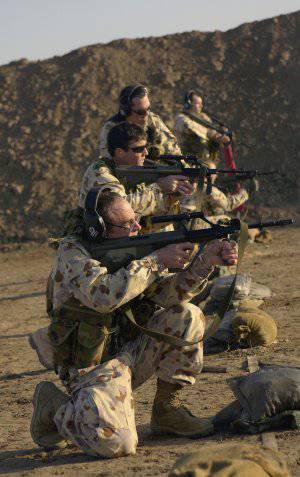 "Steyr AUG is in service with the Austrian army and police ... Adopted in Australia, New Zealand, Ireland, Saudi Arabia, Tunisia, Oman, Malaysia, Morocco, Bolivia, Ecuador, France, Ukraine, and also in law enforcement agencies in many countries, in including the US Coast Guard, police of some US states and special forces units of the United Kingdom (SAS) and Germany (GSG-9). ” (Wikipedia)

So ... Australia, Ecuador, USA, Ukraine ... I will keep silent about Europe in general. Even in Russia, the civilian version of the Steyr AUG can be bought for pathetic 3000 $.

So how good is this rifle, as if descended from the screen of a science fiction film?

First of all - its versatility.

Three Austrian designers - Horst Wesp, Karl Wagner (Karl Wagner) and Karl Moser (Karl Möser) - tried to take into account all the tasks that small arms in the platoon (task force) solve, and combine the incompatible in one army gan the car. Standard rifle easily turns into a light machine gun change to a longer barrel with bipod. The same rifle easily turns into a short army carbine for conducting sabotage operations (it is with these weapons that the Austrian paratroopers are armed by default) and a submachine gun for a pistol cartridge for sweeping in dense urban areas. And this is all the same "device"! All this transformation is performed by a simple change of modules. Fantasy! 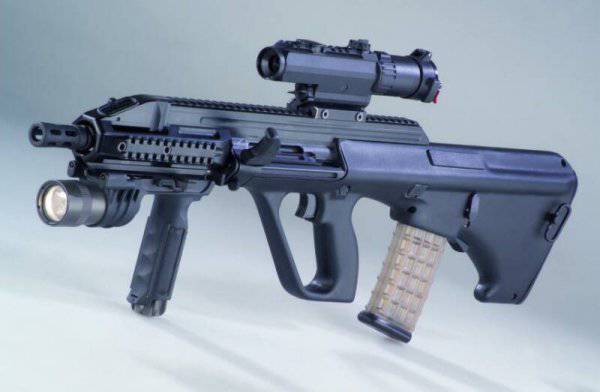 The advantages of this weapon "designer".

1. The layout of the bullpup allows you to reduce the length of the weapon while maintaining the same barrel length.
2. The offset mechanisms to the butt has a positive effect on the accuracy of fire.
3. The center of gravity shifted to the butt allows the fighter to quickly carry fire along the front and in depth, the weapon rested on the shoulder turns easily.
4. Pretty high reliability of components and mechanisms.
5. The possibility of changing the rifle according to the tactical task - from a submachine gun to a light machine gun (sniper rifle).
6. Ability to adapt for both right-handed and left-handed by transferring the extractor window.
7. The translucent plastic shop allows you to see the amount of ammunition.
8. Easy disassembly-assembly. With incomplete disassembly, sufficient to clean the weapon, the rifle can be disassembled into just 6 parts.

However, the first decade revealed some disadvantages of this “complex”. 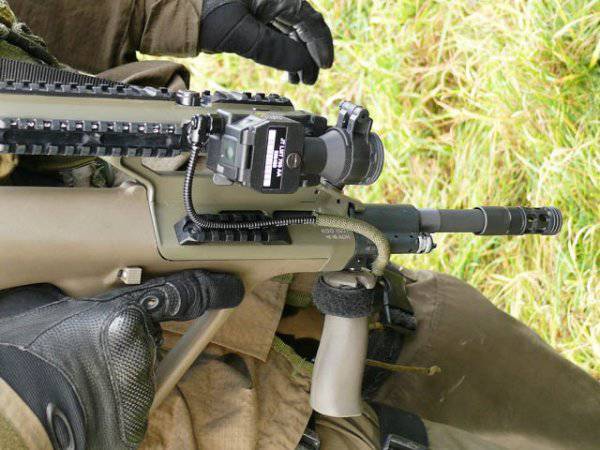 However, the developer and manufacturer are trying to compensate for these shortcomings by additional modernization. The second modification of the Steyr AUG A2 differs from the base model with the presence of a universal mount for NATO standard sights (Weaver bar) and a folding front handle. The sight is lowered down to reduce the overall height of the weapon and ease of shooting from a prone position.

In 2005, Steyr-Mannlicher introduced the third modification of the AUG family - A3. The main differences between AUG-A3 are:

1. The lack of a standard optical sight, it is replaced by the Picatinny rail (Picatinny rail), a modern universal mount for any additional devices.
2. The regular front handle was removed and replaced with a picatinny rail.
3. Picatinny slats are also installed on the sides.

So, you can weigh AUG-A3 from all four sides!

Based on the design and tactical and technical characteristics, it can be said that the AUG, especially the A3 model, is the most suitable weapon for a small professional army, groups of mobile special forces for lightning strikes and special police units. According to the rating of the American Channel Military Channel 10, the best rifles of the 20th century, the Steyr AUG rifle took the honorable 7 place.

By the way, the first place in this rating of small arms is still occupied by our Kalashnikov assault rifle.