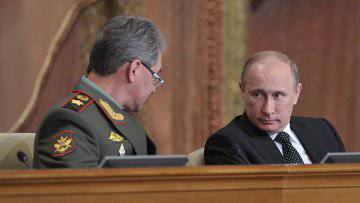 "Strategy Page" - An American online publication, positioning itself in the media market as a source of fresh information on military topics. This resource publishes a lot of materials about the armed forces of the world, gives analytical articles about wars and events in “hot spots”. Here you can read about various weapons systems (armored vehicles, artillery, naval aviation etc.), about the software used in military affairs, about information wars and the like. Lately, judging by the summer materials, the Strategy Page has been very interested in the Russian army - in particular, issues of its modernization.


For example, in a recent article (from 5 August) "Strategy Page" reports on the dispute "Russian military officials," breaking spears in the controversy about the usefulness of the launched military modernization. On the American website, they note that the trouble with Russian modernization lies in the very approach to it: only a few people have access to the secret thousands of pages of analysis and calculations to improve the sun.

It is noted that not all of these people find meaning in the “State Armaments Program” (or SAP). But how can society debate on this program, if no one is able to criticize it specifically and specifically? After all, it is covered with the darkness of mystery. Existing critics say that SAP is a “hodgepodge” made from Soviet military science of the era and scattered facts and goals. Moreover, SAP, apparently, does not give any realistic suggestions on how to cope with corruption in the military and defense industries, as well as solve the problems of bad management of the defense industry.

The authors of the material believe that corruption and poor governance have created serious problems in Russia. Many officers are not interested in SAP proposals aimed at improving combat capability. Many senior officers, American analysts write, are still much more concerned about their own enrichment than the creation of modern armed forces, which is relevant since the end of the Cold War.

As for the officials who are in charge of the defense industry of Russia, they are apparently incompetent in the field of new weapons. In the army for many years complain about it. SAP critics want more "realism" in relation to solving urgent problems in the army, especially in the fight against corruption and in overcoming the obsolescence of Russia's defense industry.

Meanwhile, Americans say, military modernization efforts have been underway for almost a decade: the government has realized that something needs to be done with rapidly aging military equipment.

In many cases, the site notes, procurement is important, because the Russian armed forces still use military equipment and equipment from the Cold War era - what was made in 1970 and 1980, and even in 50 s and xnumx's.

The attitude to the Russian modernization of the armed forces at “Strategy Page” is as follows: the defense industry of Russia is not at all world-class; the Russian military usually receives updated equipment from the Cold War, which cannot compete with new generations of Western technology.

From some information about SAP, the authors conclude that in the next decade at least one third of the existing equipment will be replaced in Russia, and in some categories (usually high-tech) - and more than 80%.

The Russian government is making big plans. But if it does not fulfill them, the morale of the army will drop below the plinth. This will happen especially quickly on navy. The authors note that from 1991 until recently, Russian warships are idle on the docks, and as a result, a whole generation of sailors has almost no marine experience. This is "the path to defeat in wartime, and sailors, especially senior commanders, are well aware of this."

Also on the site it is noted that a big problem is the fact that the new equipment, which was received by the troops, the army "is not impressive." The military can go online and see the technical characteristics of many types of modern Western technology. Russian weapons rarely look good by comparison, analysts say.

In conclusion, the authors write that no one knows exactly how much money the Soviet Union spent on armaments during its glory days — when its army was called the Red Army, and the powerful naval forces were known as the Red Fleet. The authors believe that the USSR spent on armaments more than ten percent of GDP ("no one is sure about the exact figures, since the Communists were not big fans of accounting and accurate financial reporting").

Today, Russia plays by the Western European rules, trying to keep military spending at the level of 3-4 percent of GDP. Moreover, a significant part of these means will only replace the weapons of the Cold War. Moreover, this will happen if the prices for oil and natural gas do not drop - and this cannot be, the authors of the material are sure. Therefore, the current Russian army will be nothing more than a “shadow” of the Soviet army in the days of its glory.

Observed and translated by Oleg Chuvakin
- especially for topwar.ru
Ctrl Enter
Noticed oshЫbku Highlight text and press. Ctrl + Enter
We are
Situational analysis of the death of the MH17 flight (Malaysian Boeing 777), made on the basis of engineering analysis from 15.08.2014Strangulation: the context, conduct and consequences of the American naval blockade of China
228 comments
Information
Dear reader, to leave comments on the publication, you must to register.