Joke from al-Qaida as a gift to Obama

August 6 2013
63
6 August in the press, new information appeared about why the American embassies in different countries were closed. Earlier, the State Department reported that many US diplomatic missions will be closed on Sunday, August 4, for security reasons. The media wrote that it was on this day that al-Qaeda marked a terrorist attack against American diplomats: after all, Muslims celebrated the Power Night on Sunday night. However, if you think about it, there was another reason for the alleged terrorist attack: August 4 was Obama's birthday. 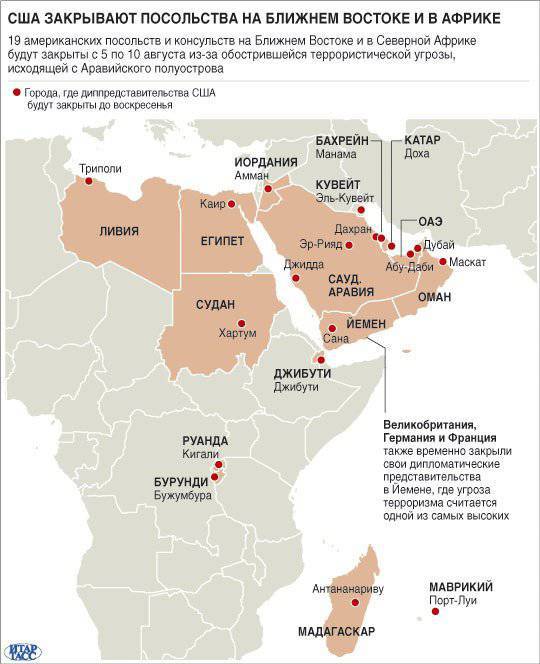 The vigilant American intelligence services learned about the planned ominous event from the al-Qaeda intercepted talks. The press, of course, did not say how al-Qaida conversations suddenly turned out to be tapped by the competent authorities and how it happened that the plans of al-Zawahiri began to be transmitted almost by direct cable to the Oval Office of the White House.

It got to the point that the secret services transmitted information about the wiretap to Congress. Congressmen, in their characteristic pretentious manner, recognized that the threat is more than real, and the Head of the National Security Committee Committee on National Security, Michael McCall, told reporters: “This is obviously one of the most specific and credible threats that I saw, probably, from September 11 ". (This refers to the famous 2001 attack of the year).

The US Marine Corps Rapid Response Units in Spain, Italy and in the Red Sea area were immediately placed on high alert.

More recently, al-Qaida’s unclear alarms have been extended to August 10. Some embassies were opened, but others were closed in nineteen states. (See on infographics ITAR-TASS).

6 on August, some details surfaced.

Associated Press found out that al-Qaida’s leader, Ayman al-Zawahiri, sent a message to Nasser al-Wahishi, his immediate subordinate from the Al-Qaida subsidiary in the Arabian Peninsula (Yemen). He was captured by the vigilant US secret services, who were engaged in more than just tracking Google customer inquiries about backpacks and pressure cookers.

How the conversation took place is not specified. Immediately striking is the fact that such secret gentlemen - like az-Zavahiri - were not particularly encrypted. And then, on the American newspapers, an exciting rumor spread that American vigilant special services (again, it was not reported which) had uncovered almost the most large-scale terrorist plot since September 11. In the USA, they even forgot about Snowden and the preparation of the corresponding answer to the Russians who gave him asylum.

According to "Lenta.ru" With reference to the Associated Press, 6 August, the US State Department ordered the evacuation of the embassy from Yemen in connection with the threat of Al-Qaida. At the same time, the State Department advised “immediately” to leave the country and all the American citizens who are in Yemen.

In addition, according to France-Press, four people suspected of involvement in Al-Qaida’s activities were killed in Yemen from an American UAV on Tuesday. The operation took place in the province of Marib. One of those killed supposedly was on the list of 25 militants whom the Yemeni authorities consider to be involved in the preparation of the aforementioned large-scale terrorist attack.

ITAR-TASS reports that two US military transport aircraft have already arrived in Yemen to evacuate American citizens. In response to an appeal by the US Air Force State Department, early in the morning some of the US personnel were taken out of Sana'a. This was announced by the press secretary of the Pentagon, George Little. “The United States Department of Defense personnel are still in Yemen to support the State Department staff,” he said. “They continue to monitor the security situation.”

Site USA Today made a review of the opinions of well-known observers and analysts on the alleged terrorist attack.

Jeffrey Goldberg ("Bloomberg") pointed out that the State Department is now in a difficult situation. If the White House had not announced the alarm publicly and, God forbid, something terrible would have happened, the Obama administration would have been accused by political opponents of not giving a timely warning and not taking action. Goldberg notes that perhaps there is a way to organize the safety of diplomats that would bring to the whole world the idea that al-Qaida cannot playfully harm America.

Paul Whitefield of the Los Angeles Times says that he is almost ready to thank the government for “looking out” for citizens.

Clive Irving ("Conde Nast Traveler") gives the following two explanations for what is happening. First, the White House is desperately trying to avoid a repetition of the tragedy in Benghazi (Libya), when the State Department seriously underestimated the risk to its employees. Hence the increased attention to the diplomatic staff of the embassies. Secondly, the national security agencies are a whole “industrial complex”, the most controversial element of which is the NSA. Today, all these structures are in a difficult situation because of Snowden's revelations and therefore they want people to learn: the end justifies the means.

As for the attack (or terrorist attacks) of Al-Qaeda, the conjectures are very different, but they all smacks of ordinary fiction. The only thing that converges the American press, so it is in the dating of the alleged terrorist attack - August 4. Interestingly, the secret service overheard the date for sure, but the place and time of the explosion was missed.

All this looks extremely doubtful.

And it’s not about the so-called "conspiracy" and that the special services like the NSA or the CIA plan to inflate their budgets in this way.

Most likely, some conversations overhearing and peeping departments and really recorded.

Them allowed write them down.

"APN North-West" cites the opinion of French blogger Allen Jules: “The birthday of Barack Obama is becoming a kind of milestone for terror. But why al-Qaeda, which was an ally of Barack Obama in Libya and today in Syria, came out now with threats against him? .. If nothing happens today, then all this will fit into this logical scheme. Al-Qaida simply laughs at the United States and at the fears of the American authorities to darken Obama's birthday, she has often joked in this way ... ”

Thus, if we recall Mr. Goldberg's advice, we must offer the White House to close forever all the embassies in North Africa and the Middle East. Then the NSA will be able to completely switch to tracking Google searches for the most common citizens and citizens like Michel Catalano, who lives on Long Island. The other day, she was interrogated for six hours by six armed policemen about why she entered the word “pressure cookers” into the network search field and why her husband was searching the Internet for a backpack ...

Ctrl Enter
Noticed oshЫbku Highlight text and press. Ctrl + Enter
We are
Results of the week. “Unlike everyone else, I went to the army for spiritual reasons.”Results of the week. “I am a prince! What I want - and I turn back ... uh ... I act in the interests of the state "
63 comments
Information
Dear reader, to leave comments on the publication, you must to register.