The beginning of the Second World War. Westerplatte 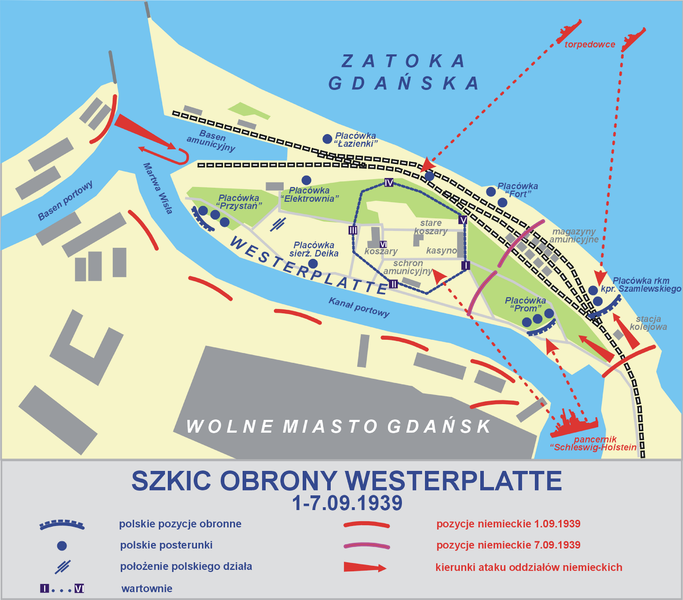 1 September 1939, the German troops invaded Poland. By this time, Germany had already annexed Austria (the so-called Anschluss) and the Sudetenland region of Czechoslovakia, but so far has not met any serious resistance to its aggressive actions. On the first day of the war, the Germans faced the task of taking a military transit warehouse on a peninsula in the Gdansk Bay. The stubbornness with which the small contingent of Polish soldiers stood against the Reich war machine came as a surprise to the German command. AT history This event is called Westerplatte defense.

The Free City, near which the military warehouse is located, was a disputed territory between Germany and Poland. From the very beginning of 1933, it was clear that the Germans would sooner or later attempt to seize territories that they considered historically to be theirs. In connection with this, preparation of the warehouse for possible defense began. A number of fortification works were carried out, 6 camouflaged guard rooms were created, existing civilian and military facilities were prepared for defense. In addition, the Polish soldiers equipped special posts equipped with machine-gun nests - the post "Prom", "Fort", "Lazienki", "Power Plant", "Pier" and "Line of the railway." The defense was created by captain Mechislav Krushevsky and engineer Slawomir Borovsky.

Position preparation was carried out until the 1939 year. Initially, the garrison was about 80-90 people, but after provoking 1938, it was decided to increase it to 210 people (including civilian personnel). According to the plan, it was supposed after the outbreak of armed conflict to transfer here another 700 man from the Intervention Corps. However, 31 August 1939, Lieutenant Colonel Vincent Sobotinsky arrived in Westerplatte, who told Heinric Suharsky, the warehouse commander, about canceling plans to defend Polish sites in Gdansk, and the Germans would most likely strike the next day. The lieutenant colonel urged the major to take a “weighted decision” in the event of a war. 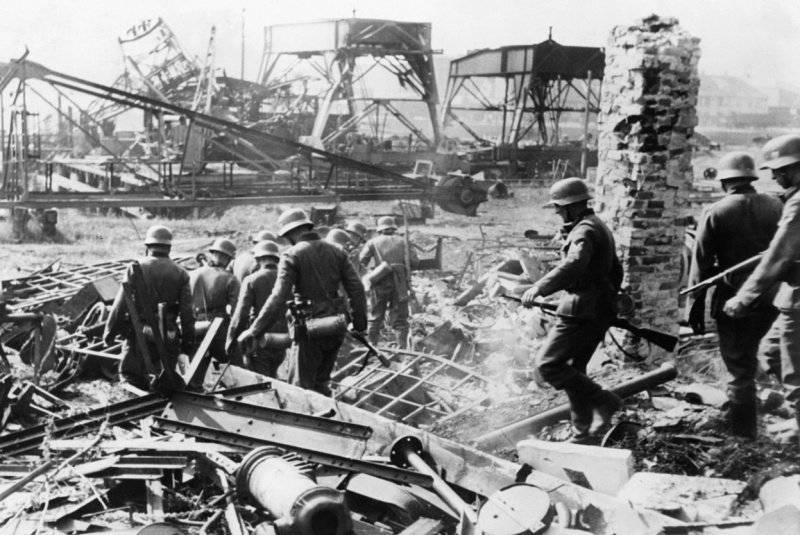 For the capture of well-fortified Polish warehouses, the Germans sent a training battleship Schleswig-Holstein to the Bay of Gdansk. He was supposed to provide artillery support to the advancing German assault detachments of Marines Marinesturmkompanie of about 500 men. In addition, German units numbering up to six thousand people were present in the area, about 2 thousand were part of the SS-Heimwehr Danzig special brigade.

The Germans planned to launch an offensive early in the morning with a massive artillery bombardment, after which the SS Heimwehr battalion, two companies of police forces and a company of marines would go on the attack. The shelling from the battleship began in 4: 45 and fell to the post of "Prom" and in the area of ​​CP No. 6. After that, assault troops entered the battle. Unexpectedly, the Germans were faced with a powerful defense and were stopped by machine-gun fire from the positions of "Val" and "Prom".

Throughout the first day, German troops made numerous attempts to break the defense of the Poles. The attacks were carried out from different directions, but the Polish forces were able to successfully repel all attempts by the Germans to move forward. At the end of the first day, the Polish casualties amounted to 4 people killed and several injured. German assault troops lost around 100 people, much of whom were marines.

After the first setbacks, German troops began to actively use heavy artillery and Aviation. September 2 from 18:05 to 18:45 47 diving bomber Yu-87 dropped a total of 26,5 tons of bombs. During the raid, KP No. 5 was completely destroyed, and all the soldiers there were killed. However, the psychological damage from the attack was much greater. The besieged Polish fighters panicked and a riot arose. The command took the toughest measures and shot four soldiers. However, the Germans did not manage to take advantage of the achieved effect and started a new attack only at 20:00, when the Polish fighters managed to recover. After an evening attack, the commander of the garrison, Henrik Sukharsky, decided to surrender. Deputy Frantisek Dombrowski removed him from command and assumed control of the garrison. Legionnaire Jan Gembur, who hung out a white flag by order of the commander, was shot and the flag was removed.

Violent battles lasted for the next three days. The Germans developed a special attack plan, which was attended by two battalions of the Krappé regiment, a company of marines and 45 sailors, armed with four machine guns. Artillery preparation alternated with assault attacks, which, however, the Poles were able to successfully repel. At night, the Germans attempted to imperceptibly break through the canals in boats, but were discovered and shot with machine guns. The third day passed for the Poles without a loss, and the declaration of war by Germany by England and France raised the morale of the personnel. 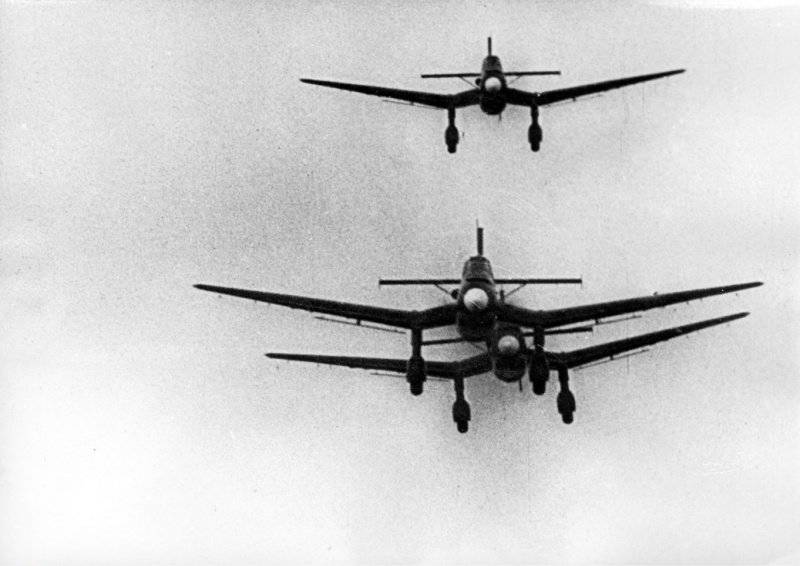 The fourth day began with a powerful artillery strike, in which, among other things, 210 mm mortars and 105 mm German ship guns took part flotilla. One of the shells of the German destroyer nearly got into the oil tank in the port of Gdansk, so the Germans refused to use the fleet and recalled their destroyer. By the end of the day, the garrison began to have problems with food, drinking water and medicine. None of the Polish soldiers died that day, however, fatigue was already noticeably felt and Major Sukharsky again spoke of surrender.

On the fifth day, the Germans transferred their fire to the trees surrounding the bunkers. They believed that snipers could be hiding there. Several attacks were made by KP No. 1, 4, as well as the Fort post, but they did not bring any visible effect. The soldiers' morale continued to fall.

6 September the Germans again tried to burn the forest. To this end, a tank with gasoline was dispersed by rail, but the defenders managed to undermine it away from their positions. Similar attempts continued in the evening of the same day, but were unsuccessful. Major Sukharsky again convened a meeting at which he called for surrender. Commander Captain Dombrowski and Lieutenant Grodetsky decided to continue the defense, they were supported by the majority of personnel.

The Germans launched a general attack on a weakened garrison on the morning of September 7. The assault on Westerplatte began with a massive artillery bombardment of all heavy weapons available to the Germans. The main blow fell on the gearbox number XXUMX, which was soon completely destroyed. The shelling lasted about two hours, after which the German assault troops launched an offensive from the south-east. The Poles managed to recapture the Germans during the hour and a half fight and prevent a hand-to-hand fight, which the defenders simply did not have. 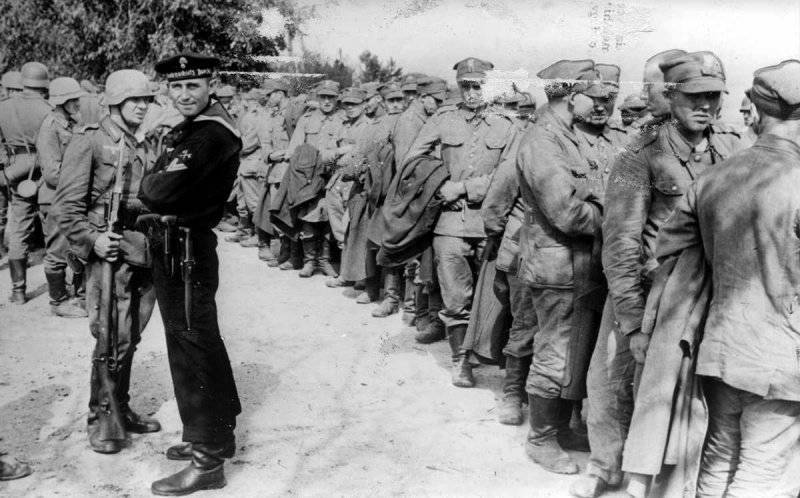 Major Sukharsky, who oversaw the destruction of CP No. XXUMX, again raised the issue of surrender. He convinced the defenders to pass weapon and in 10: 15 ordered surrender. Sukharsky notified Marshal Rydz-Smigly about his decision, who awarded military defenders and another military rank to all defenders of the garrison.

Westerplatte defenders lost 16 people killed and 50 injured. Many of them were sent to labor camps, where they worked in German factories and plants. Some of them subsequently fled and fought on the side of the Home Army, as well as in other military formations of both the West and the USSR. From the 182 defenders, the Westerplatte 158 survived to the end of the war. Major Henrik Suharsky before the end of the war spent in the German oflag, died 20 August 1946 year in Naples.

The Germans lost to 200-400 soldiers killed and wounded, and their attack on Hel was delayed for a week. 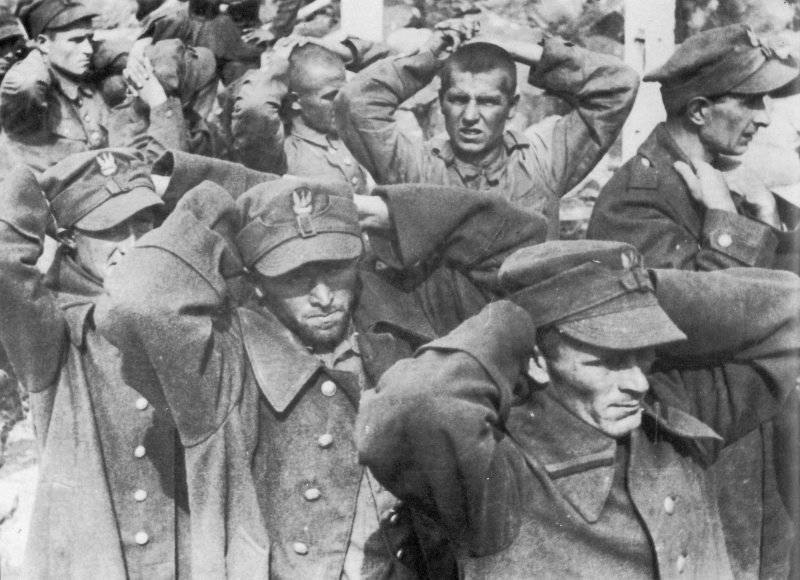 Ctrl Enter
Noticed oshЫbku Highlight text and press. Ctrl + Enter
We are
Myths of the Great Patriotic. Was Stalin an ally of Hitler?Molotov-Ribbentrop Pact - the policy of pragmatism
30 comments
Information
Dear reader, to leave comments on the publication, you must to register.