On expulsion of the Bloodhound Gang from Russia 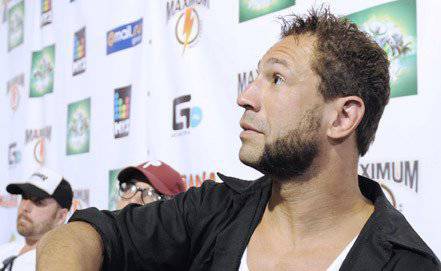 The routine, in fact, case - the expulsion of the American punk band from Russia, which had mocked the Russian flag on duty - is of interest solely to the reaction to it. This reaction clearly shows that not all the inhabitants of the domestic media environment have noticed how much the world has changed in 2013. And in what direction.


For those who are only from the country and from the media at the weekend dodged - briefly about the incident itself. Bluduhound Gang, a VIA who recorded two popular songs ten years ago (about the porn actress C. Lane and about the Discovery Channel), spoke recently in Odessa. During the concert, one of the people of art, the bass player, flicked the Russian flag and threw it into the auditorium. On this occasion, the Minister of Culture of the Russian Federation V.R. Medina decided to ban a concert of the VIA in Krasnodar, and the organizers of the festival, where the performance was planned, synchronized this performance. The group flew away from Russia just as it flew - except for the fact that local citizens broke into the Kuban at parting. Everything.

So, now the most interesting. Against the background of the natural “right and right” public, voices immediately appeared, exhorting the public in the sense that it had some kind of savage reaction. Uncivilized. Hypertrophied. That in normal countries such tricks from punk bands are simply not noticed, and we with our troubles have nothing to be offended, but it is, on the contrary, worth wiping. In the most clinical form, it sounds like this: “The inadequacy of the reaction is what is amazing in this case. Some savages who have offended the totem. ”

Or so: “In a country in which there is no fair trial, fair elections, freedom of speech, a free market (hereinafter referred to as a long list of vices of our country) - here in this country we, the population, are the flag with which the gangster regime is wiped every day. So, do not judge the strictly great group of the Bloodhound Gang, we wipe every day with us, and nothing. ”

So here. There is an opinion that these commentators are somewhat behind the times and still confuse the concepts of “normal” and “usually in the west of Russia”. They still live in space 1990-x, where the majority of normality and freedom undoubtedly belonged to the west. And according to the conventional “Western canon” they are still building their ideas about what should be.

The thing is that now we don’t have 1990. We have changed a lot in the ideas of correctness and freedom.

Of course, much has changed and they have there. That Western ideology of freedom, which won ours in 1990's, is not at all what they have now. Now they give Oscar to extremely dull films because they are about blue because they don’t give it a try - and 18 years ago they gave Oscar to the “Brave Heart” because the film is good, although they throw a blue one there. in the window just for a laugh. It has now somehow become clear that the CIA is listening to everyone, reading the correspondence and drawing conclusions - and 20 years ago, everyone in the West knew that only Soviet KJB was following the citizens, and there was no such thing in the free world. It is now, after the destruction of Yugoslavia, Iraq, Afghanistan and Libya, after secret prisons and mass genocides in the former countries - everyone knows what the West is doing to the weak. 20 years ago it was believed that he was freeing the world from bestial dictators in epaulets.

In short, they have a lot of things changed in the concept of freedom. But the main thing is that now this is strictly their problem, not ours.

Over the same two decades, Russia has developed its own, supported by the overwhelming majority of citizens and in the last year even a partly approved by the state idea of ​​the norm and deviations, of acceptable and intolerable. And that there is freedom, too.

... Therefore, dear Americans can live, of course, as they want. And create what they want. With one exception - not with us. They can adopt boys in group gay families - but not Russian. They can bomb everything on the planet Earth - but not the territories that are protected by Russian military power. They can poke a flag in their butt for artistic purposes, punk and other purposes - but if they want to make money in Russia and leave unharmed, then this should not be a Russian flag.

And the fact that our compatriots, who have not noticed all these changes and still live on import normality and import freedom, can only sympathize. Our worlds clearly continue to diverge - the further, the stronger. And it will be harder and more painful for such citizens to live as a carcass in their homeland, and a world view in another world. Because you never know what they are there in their West tomorrow, they will think of calling normal and acceptable.

Ctrl Enter
Noticed oshЫbku Highlight text and press. Ctrl + Enter
We are
About Stalin and KhrushchevWhat you didn't want to know about England
217 comments
Information
Dear reader, to leave comments on the publication, you must to register.