When Shoigu in the army began to line up 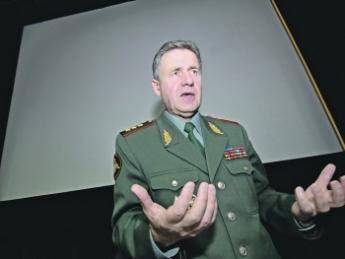 The number of draft dodgers and sick conscripts has drastically decreased, and queues are lined up for scientific and sports companies, the Defense Ministry generals said following the spring draft, seeing a steady positive trend in improving the image of the army. The main person in the General Staff, responsible for recruiting recruits, Colonel General Vasily Smirnov told RBC daily that foreigners who had previously served in their homeland, but decided to obtain Russian citizenship, were called into the Russian army for the first time.


Sergei Shoigu - one of the most popular politicians in the country - became the first in the newest stories Russia's defense minister, in which the number of draft dodgers has ceased to grow. On Thursday, the generals responsible for the last spring draft reported to the journalists and announced that 153,2 thousand young men were called up for military service. Thus, the first call at Shoigu is made on 100%.

“More than half of all conscripts went to serve in military units stationed in the regions from which they are called,” said Colonel-General Vasily Smirnov, head of the General Organization and Mobilization Directorate of the General Staff. “The number of draft dodgers from the army decreased by 18% (those who did not arrive at the recruiting station. - RBC daily), by 15% - the number of those who are hiding so that they would not be handed a subpoena.” In Moscow, the entire 24 youth did not show up to be sent to the troops in this call, although this figure had previously reached 300 — 500 people. According to the general, this indicates that the attitude of society towards the army is changing in a positive direction. Earlier, Minister Shoigu said that the number of refuseniks during the spring draft in Russia was 30 thousand. General Smirnov has headed this department since 2002 of the year, but under the previous ministers, Anatoly Serdyukov and Sergey Ivanov, he was unable to fulfill the call so successfully.

The military continued to praise the modern army, where soldiers are now allowed to use mobile phones, not work in the kitchen, play sports not in the military, but in a special form, and by the end of the year they are promised showers in all parts of the soldiers. Other generals did not lag behind Smirnov - the head of the Main Medical Department, Alexander Fisun, said that they no longer called upon the HIV-infected and patients with chronic hepatitis to join the army. At the same time, the overall health of the recruiting force has improved. Drug-addicted soldiers, who, according to the chief military physician, identified 1 — 1,5%, are now prohibited from being assigned to positions of responsibility, for example, in the Strategic Missile Forces.

In this call, for the first time, the recruit's parents were allowed to be present at military registration and enlistment offices and at assembly points when the issue of the distribution of a soldier to certain troops and units was decided. More than 12 thousand fathers and mothers took advantage of the opportunity.

The know-how of Shoigu - scientific and sports companies - are in great demand. Athletes through the CSKA system can easily get into the Olympic team, and scientists live in comfortable student conditions. “We placed an advertisement on the recruitment to a scientific company on the Academy’s website, so students bombarded us with their resumes,” said the head of the Voronezh Air Force Academy, Gennady Zibrov. “We are entering a serious competitive basis, we already have three or four people in place, in the fall after graduation from Russian universities, we expect 10 — 12 people to take place.”

“Indeed, the army has ceased to be a scarecrow for the Russians,” summed up the leader of the “Officers of Russia” movement, Anton Tsvetkov. “Earlier, conscripts and their parents addressed us with one question, how to hang out, and now they ask which part is better to choose, which troops to go to serve.”

In this spring call, the Russian army for the first time joined yesterday’s foreigners. The law came into force, which does not exempt from military duties men aged from 18 to 27 years who have already served in their homeland, but have decided to obtain Russian citizenship. “At present, Russia has an intergovernmental agreement only with Turkmenistan and Tajikistan,” General Vasily Smirnov explained to RBC Daily, adding that it is not planned to conclude such agreements with other states. This means that only Turkmen and Tajiks can not be afraid of our army in obtaining Russian citizenship. According to the FMS, most of all in recent years, citizens of Ukraine, Moldova, Tajikistan, Kazakhstan, and Uzbekistan have become the new Russians. According to Mr. Smirnov, about a thousand such recruits joined the army’s ranks. Many of them went to serve the second time. But Belarusians, as citizens of the Union State, are not threatened by the army in the second round.

Ctrl Enter
Noticed oshЫbku Highlight text and press. Ctrl + Enter
We are
What you didn't want to know about EnglandList of destroyed the largest and most high-tech enterprises
Military Reviewin Yandex News
Military Reviewin Google News
104 comments
Information
Dear reader, to leave comments on the publication, you must sign in.