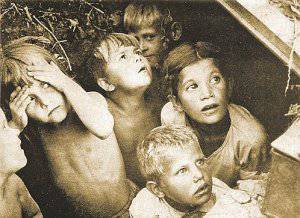 WAR is only five letters in a word, but how much suffering and grief is connected with it. After all, the word war is grief, tears, broken fate and death.

Since ancient times, there is no constancy in the world; each new dictator sets himself the goal of capturing as many new territories as possible and assert his power with fire and sword. If you look at the tutorial on stories then, probably, it is impossible to meet a date in which there would be no wars. Modern history, if not strange, also begins with a description of the war - a civil war in the new state of the USSR, but this is an internal war whose goal was to change the ruling regime. The terrible internal wars are because participation of members of one family at different poles of the conflict in them, an example is the fact that during the civil war the brother fought with his brother, the father saw the enemy in his son.

22 June, the calm morning of the country was disturbed by the announcement of the beginning of a new war, which was later recognized as the bloodiest and most brutal. Fascist Germany, led by Adolf Hitler, declared war on the whole world, but the main hostilities unfolded on the territory of the USSR. In contrast to the Civil War, the Great Patriotic War united all the citizens of the country to fight the invaders. Men are able to keep weapon in their hands went to the front, while women and old men remained in the rear and by their work made a significant contribution to the victory. The whole huge country stood up to defend their freedom from the brown yoke. In our time, one may come across statements that victory was achieved at the expense of communist fanaticism and the cruelty of the authorities, but these statements are not true. It is necessary to look into the eyes of veterans and in them you can see not fanatical brilliance, but faith in yourself and your future.

The consequences of the war do not disappear with the announcement of victory. After a long four years of war, the economic structure of the country was completely destroyed. During the retreat, the fascists destroyed everything that could have served the people to rebuild the country. School buildings were completely destroyed and scattered books and broken books reminded of their existence. school furniture.

Despite the dire consequences of the war, a great country rose from its knees, and in this the great merit of not the individual citizen, but the entire population.

Until 1979, the country lived a normal measured life. Yes, there were military conflicts with the participation of the Soviet Army, but they all took place outside the USSR and ended in a very short time, but in 1979, the government made, perhaps, the most terrible and ridiculous decision - to send troops into the territory of neighboring Afghanistan. The support of the new regime in Afghanistan brought the concept of war to many families, with it came grief and tears.

Young soldiers were thrown into a new world for them. A world in which good and evil stand together, a world that knows no mercy and does not feel regret, this world is a war. Despite modern weapons and high tactical proficiency, Soviet troops suffered huge losses during their participation in a military conflict. Many young people died in the fields, or rather the mountains of war, and many are now considered to be missing. To fulfill the international duty was a particular honor for every soldier and officer, and it’s not a matter of wanting to receive awards and win fame, but that in every person’s soul there was love for the Motherland, and participation in a military conflict by the Soviet authorities was presented as a defense of the homeland .

The war in Afghanistan ended in February 1989 of the year and everyone believed that there was a world in which there is no more place for wars. In the early nineties an event occurred that put a peaceful existence in question - the collapse of the USSR.

As with the division of household property during a divorce, the collapse of a huge country could not go without conflicts. The desire to independently manage their territories arose among many autonomous republics of the former USSR. Chechnya has become one of these republics. The desire to become an independent unit in the world of independent states led to the beginning of a new military conflict, in which a huge number of warring parties were involved. On the one hand, these are the federal troops of Russia, and on the other hand, the insurgent army militants and numerous mercenaries, who create separate groups with the entry of foreign militants into them.

Despite the promises of the authorities to finish the conduct of hostilities in a short time, they continue to this day and it is very difficult to say - peace has finally come! But so eager to utter this phrase.