Hazing in the German army 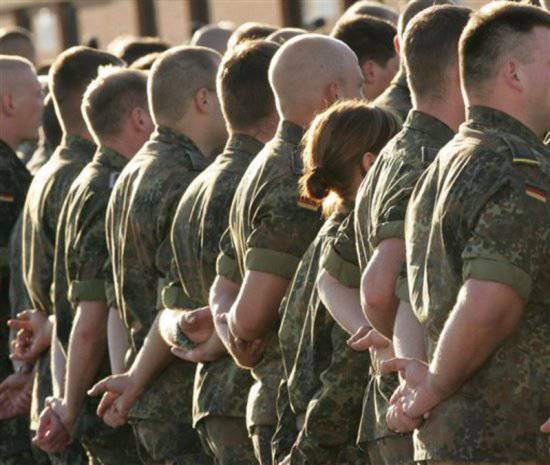 The German army is shaken by scandals. It turned out that the letters of the soldiers who serve in Afghanistan are revealed. That one of the contingent’s servicemen was accidentally killed by comrades who were playing with weapons. But историяmost widely publicized associated with naval training sailing ship fleet Germany. The cadets told reporters that hazing reigned aboard the ship, which caused the death of the cadet.

- German Ministry of Defense. A week ago, the head of this department, a hereditary aristocrat and baron, was called the most popular politician in Germany. Today Karl Theodore zu Guttenberg is the most criticized politician. His reputation was tarnished by a series of scandals in the German army, the loudest of which was hazing at a training sailboat of the navy.

"Gorh Fok" - aka "Comrade" - the legendary bark, where thousands of cadets were trained. After the Second World according to the contract of reparations was transferred to the Soviet Union. After the collapse of the USSR, it became the property of Ukraine, and 8 returned to its homeland years ago - the Germans bought the sailboat, which urgently needed repairs. "Gorch Fok" - the movie star ship - it was filmed in "Scarlet Sails" and "Wind of Hope". Barc survived different times, but there has never been such a scandal on board. German media have unearthed that a cadet girl fell off the mast in November. After that, the ship began a riot of cadets.

- While we can talk about the accident. The girl fell from the mast and was immediately taken to the hospital. But, unfortunately, the injuries were severe, and could not be saved. After that, a difficult situation arose on board - the cadets were in shock and problems began. Then we decided to stop training.

Rebel cadets were sent home to Germany. And they started talking. It turned out that the dead girl Sarah Lena Zele was too short to perform lifting work on the 40-meter mast. But she was allegedly forced. Like many other cadets - although according to the regulations, this is a voluntary matter. The cadets also told about hazing on board - that the commanders forced them to carry out meaningless orders, prevented them from sleeping, and exerted psychological pressure. German journalists remembered - this is not the first case of the death of the cadets on the “Gorch Foke”. Two years ago, during a night watch, 18-year-old cadet Jenny Bocken fell overboard and sank. Now her parents questioned whether it was an accident.

- Of course, we were parents, it was clear that the Bundeswehr, which our daughter chose, is a strict structure, where orders have much more weight than, say, in ordinary enterprises. But after the last incident, after the cadets' revelations, my daughter told me a lot about what I see in a different light.

The military in the comments kept. But "Gorch Fok" has already been recalled from Argentina home. When he arrives in Germany, a commission with the participation of Bundestag deputies will investigate this case. The commander of the sailboat retired.

- The commander of a sailboat is relieved of his duties. The vessel returns to its home port. It will be anchored until all the circumstances of the incident are clarified, and until a decision is made to resume the training of the cadets.

Moreover, large-scale inspections await the whole army. The head of the Ministry of Defense ordered to check what is happening in all types of troops.