Asylum for Snowden - slap in the face of the White House

August 3 2013
329
1 August afternoon informant Edward Snowden received temporary asylum in Russia - and left Sheremetyevo by taxi. Or, alternatively, on a gray car with unmarked characters. It is believed that the issue of personal security is now a priority for a former employee of the CIA and the NSA. As for the White House’s reaction to the Russian refugee decision, Obama didn’t even have words, and Senator Lindsey Graham, one of the “hawks,” called on Washington to “hard-answer” Moscow. Not kept silent and the famous Mr. McCain. 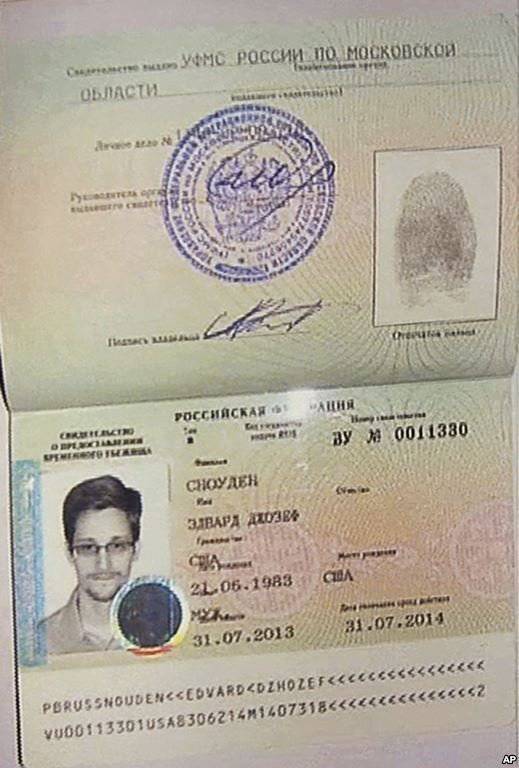 According to "RG" With reference to ITAR-TASS, Edward Snowden left Sheremetyevo near 15: 30 hours Moscow time. A source in the border department said: "The border control authorities received the necessary documents from the Federal Migration Service, on the basis of which he was given the right to be in the territory of the Russian Federation."

Ilona Yarosh ("Voice of Russia") asked questions about Snowden to the experts.

The lawyer of the former US intelligence officer Anatoly Kucherena said that Snowden left on a regular taxi and alone. He added: “Snowden was granted a certificate of temporary asylum in the territory of the Russian Federation. According to the current Russian legislation, this document is issued for one year. That is, it must be located on the territory of the Russian Federation for a year. ”

Kucherena said: “He remains on the territory of Russia, then he will want to go to Europe, America — he will personally solve these issues already. To date, he has no such plans yet. ”

Also, the lawyer noted that Snowden had got in Russia friends-Americans who would help him.

Sergei Markov, member of the Public Chamber, Vice-Rector of the Plekhanov Russian University of Economics, believes that E. Snowden will remain in Russia for a while: “If the Americans continue to block Snowden’s stay in Russia, then he will be forced to remain in Russia. We cannot give Snowden to them from our territory for several reasons. The first reason is legal. We do not have an agreement with the Americans on the need for mutual extradition of criminals, despite the fact that we have offered the Americans to conclude such an agreement many times. In addition, Snowden did not violate any of our laws. And in America, Snowden is threatened with torture, an unfair trial and the death penalty. ”

The head of the German branch of the organization “Transparency International” Edda Muller gave an exclusive interview to the Berlin office of the Voice of Russia. Here is what she said about the award: “The Exposure Award” was established by the Association of German Scholars (VDW) and the German branch of the international association of lawyers opposing nuclear weapons (IALANA). We took part in this ceremony, because the topic of information protection, from our point of view, is of great interest today against the background of the global spread of communication technologies. How can we protect our data in this situation? We believe that Snowden committed a courageous act. Thus, we once again wanted to emphasize our demand for the protection of whistleblowing informers. ”

To the question “Do you personally consider Snowden a hero?” Edda Muller replied:

“I consider him a person who meets all the criteria of the whistleblower. He acts unselfishly, boldly, and, based on this, his actions deserve every respect. If one assumes the severity of the punishment that he may expect, and this we can observe in the example of the Manning case, then its severity is simply impossible to imagine. A man appears who exposes espionage and is put on trial for his act. This is not quite clear to me. Can you call him a hero? I believe that he showed great civic courage, and such people are necessary for our society. ”

A slightly different reaction followed from the American side. It turns out that the United States differs greatly in the issue of human rights and its freedoms with human rights organizations. News about granting Snowden political asylum in Russia simply “infuriated” the American parliamentarians, reports “Fox News”. Republican Senator Lindsay Graham, for example, believes that Putin does not respect Obama.

"If this information is true, Washington should regard this as a turning point in relations with Russia," - quotes "InoTV" the words of the Republican Senator Lindsay Graham.

He called Russia's decision a provocation and "a sign of Vladimir Putin’s apparent lack of respect for President Obama." The senator urged the US government to give a "hard answer" to Russia's decision.

White House spokesman Jay Carney said: "We are extremely disappointed with the decision of the Russian government, despite our clear and legitimate official requests and requests for the extradition of Snowden to the US in private conversations."

He stated that Moscow had not informed the United States in advance about the decision to grant political asylum to Snowden.

Yes, we add from ourselves, not like in Yeltsin's times. Nobody asks for advice or approval from the Washington Regional Committee. Even more so - permissions.

Regarding the decision of Russia, Senator John McCain also spoke, of course. He said: “Today’s decision of Russia is an outrage, the purpose of which is to humiliate the United States. This is a slap in the face to all Americans. It is time to radically reconsider our relations with Putin's Russia. ”

As for Obama, he didn’t even have words in response to the decision of Moscow on Snowden.

As transmits correspondent RIA "News" Peter Martynychev, the US president did not comment on the situation with the provision of temporary asylum to Russia Snowden.

After negotiations with the president of Yemen, several journalists asked Mr. Obama to comment on the situation with Snowden. In response, the head of state said with a smile: "Thank you all."

As noted by correspondents The Guardian A. Lun, L. Harding and P. Lewis, President of Russia V. Putin did not comment on Snowden. But, after weighing all possible options for several weeks, he seems to have decided, the authors write notes that Snowden’s propaganda value outweighs any possible consequences regarding relations with the United States.

The Guardian provides information on the departure of Snowden from Sheremetyevo as follows. Referring to the TV channel “Russia-24”, journalists write that Snowden got into a “gray car with no identifying marks”.

The Guardian also reports that his father, Lon Snowden, is going to visit Snowden. Kucherena's lawyer said that he sent an invitation to Snowden Sr. so that he could receive a Russian visa.

Leads the British newspaper and the details of the statements of Senator McCain. It turns out that he put forward a number of proposals against Russia: he proposed to expand the Magnitsky list, insist on accepting Georgia into NATO and implement the US missile defense program in Europe.

The latest survey showed, correspondents write that 43% of Russians support the granting of asylum to Snowden, and 51% approves of his exposing activities. Kucherena's lawyer said he received a lot of letters from Russian people who offer housing, protection and money to Snowden. He also said that there were letters from women romantically interested in Snowden.

Finally, Pavel Durov, the founder of VKontakte, invited Snowden to work as a network programmer.

Comrade Snowden himself, we note in conclusion, thanked Russia for providing him with asylum. On the WikiLeaks website, he published a statement in which the US government is openly accused of contempt of international law. The text says:

“Over the past eight weeks, we have observed how the Obama administration has shown disrespect for international and domestic law. However, in the end, justice triumphed. I thank the Russian Federation for providing me with asylum in accordance with the laws of the country and international obligations. ”

Ctrl Enter
Noticed a mistake Highlight text and press. Ctrl + Enter
We are
Geopolitical mosaic: Bashar Asad opened the front of the ideological struggle, and the Pentagon lost confidence that the United States fought in Iraq and AfghanistanGeopolitical mosaic: Syrian insurgents will receive direct military support from Washington, and Edward Snowden tells how America attacks China
329 comments
Information
Dear reader, to leave comments on the publication, you must to register.