The case in the Far East Express 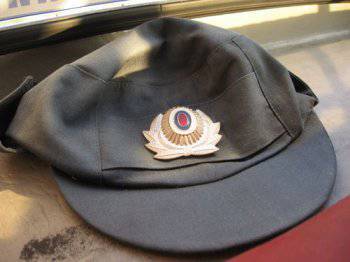 Military Review writes a lot of articles about weapon, technique and so on. However, many people forget that the most important link in any system is people. People can be both the strongest element of the Army and the weakest. Modern politicians have made the army weak. Weak in spirit, weak will to win. Weak to readiness to fight and bear service. There are practically no articles about this.


Meanwhile, in the last days of July 2013, events occurred in the country that radically change the consciousness and understanding of what is happening in Russia. Particularly depressing the question - about whether the revival of the Army?

So, in one of the Moscow markets, a watermelon dealer struck a police officer. Colleagues who were near the view of a cow eating grass, calmly watched their colleague being killed. Okay. The police - not the army - someone will say ...

However, at about this time in one of the trains in the Far East an event occurred that the media are trying to silence, but in my opinion it (this event) will be more abruptly than events in the Moscow markets.

Namely - four drunken criminals in the train disarmed a policeman, robbed passengers and .... about 50 military personnel, among whom were four armed officers.

The main thing (!!!) The command of the unit praised the officers for their inaction, and that no one was hurt by the criminals. Well, if, of course, do not consider dirty honor. But apparently for them it is not relevant.

I, as an officer in the reserve (30 years of service), arise in connection with this a number of questions that in no way make it easy to sleep.

1. How is this even possible?
2. Or maybe it's not the officers?
3. And they took the oath of "protection of the motherland"?
4. Is the command of the part in your mind? What kind of commanders are there? etc. etc.

So it tempts to quip about why, for example, they did not offer criminals a homosexual passive attitude .. would you think the boys would calm down? and in the same spirit? What school did they finish? Can they generally trust the defense of the country? Such "officers" in any army, boldly and without reproach, must immediately in peacetime be put on trial by a military tribunal and be shot on the spot in a military one. However, the problem is not in them. And the fact that these "military" simply in the language of the criminal world "omitted" the entire officer corps of the Russian Federation. And commanders. encourage the actions of these "warriors" - considered traitors. or They forgot that the train passengers are also part of the Motherland.

For some reason, the colonels, who praised the impotent warriors, did not reflect on the fact that, thanks to the inaction of their subordinates, many civilians, women and children suffered. Became hostages, etc. And if it would be their wives and daughters? Fortunately, I found a husband who adequately defended himself and his family from brutal criminals ... But, unfortunately, not an RA officer.

So you start to think. How to entrust the defense of the country so. In the Red Army - they would have become a disgrace to the whole country and would quickly fill up the lists of nameless graves. Now - they are almost heroes. Colleagues who served in the army - do you agree with that?

Ctrl Enter
Noticed oshЫbku Highlight text and press. Ctrl + Enter
We are
How can Russia survive and win in the 21st century?Russia: the Moon, Mars and further everywhere ... Speeches of the participants of the Izborsky club in the corporation "Rosobschemash"
58 comments
Information
Dear reader, to leave comments on the publication, you must to register.