Three ways of Ukraine and one Putin 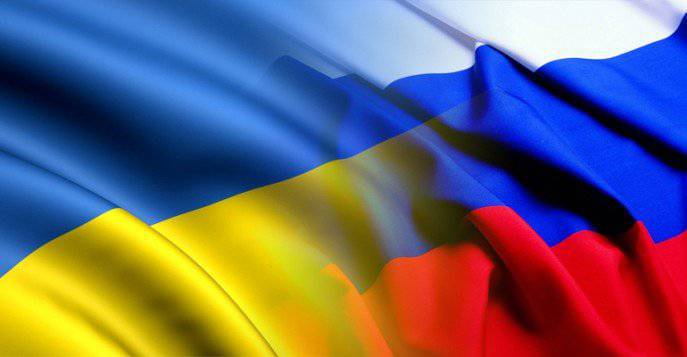 Any modern reality is based on a powerful historical foundation. And if you look at modern Ukraine in this context, you cannot fail to see that it represents a cast of at least three historical layers.

The first historical layer - the legacy of Bohdan Khmelnytsky. Central Ukraine fully reproduces the boundaries of the hetman state since the Pereiaslav Rada. In its behavior, this part of Ukraine resembles the behavior of someone who stands on Sophia Square in Kiev. Let me remind you that the hetman raised Cossacks for an uprising in the 1648 year in order to defend the freedoms granted by the former kings of the Commonwealth.

At the beginning, no one even stuttered about autonomy. But when it went too far, and the sea of ​​spilled blood finally divided the two opposing camps (Poles and Cossacks), Khmelnitsky urgently had to change the political vector.

And then the question arose of choosing a new patron in the person of the Moscow Tsar, which automatically implied the entry of Moscow into the war with the Polish-Lithuanian Commonwealth. At the end of his short life, Khmelnitsky made another leash by concluding an alliance with the Swedish king Charles X. His successor and son, Yury Khmelnitsky, went even further, without hesitation, changed the oath of allegiance to the Tsar of Moscow for an alliance with Poland against Russia.

“In terms of foreign policy, it’s more profitable for the Kremlin to develop relations with key players in the EU, above all with Germany”

For several decades, the Hetmanate rushed, alternately joining the union and betraying the Polish and Swedish kings, the Moscow Tsar, the Turkish Sultan. In the end, this is so annoying to everyone, all the neighbors are so tired of fighting each other because of such an unreliable "ally" that Warsaw and Moscow decided to simply agree, dividing Ukraine in half. Today, the ever-changing electoral sympathies of Central Ukraine are very reminiscent of these throwings by the hetman state Bohdan Khmelnytsky.

The second layer - the legacy of Catherine II. This is South-Eastern Ukraine, which was formed at the expense of Novorossiysk Territory reclaimed from Turkey in the 18th century and Slobozhanshchina reorganized by the great Empress. Catherine the Great not only won this land and secured it against raids, she also laid the foundations of its economic significance. It was with her that metallurgy appeared in the Donbass, for the needs of which coal mining began. It was she who made the Ukrainian Black Sea ports not only centers of shipbuilding, but also centers of active trade. Ukrainian bread went through them, stimulating the rise of domestic agriculture. It is thanks to her that Slobozhanshchina, together with Kharkov, has turned from a military-administrative region into an economically prosperous region. Thanks to this push, the industry in Ukraine demonstrated the tremendous pace that Vladimir Putin spoke about during a conference in Kiev. It is clear that, economically and mentally connected with Russia, this region will always strive to the East.

The third layer is the legacy of the Habsburg empire, i.e., Western Ukraine. In 1707, passing through the main city of the region - Lviv, the carriage of Peter I got stuck in the mud on its central square. And in the future, Western Ukraine has always remained a deaf province, devoid of any significance. Labor migration has always been directed more to the West, and this has formed specific “pro-European” sentiments here. The Soviet era buried the weak Russophile movement that existed in Galicia. And now, alas, one does not have to hope for support to the supporters of integration with Russia. Probably, one should not try to convince the inhabitants of this land to abandon their pro-European illusions. The very course of history will put everything in its place.

It is clear that today, under any circumstances, Western Ukraine will not want to integrate with Russia, but you will not force South-Eastern Ukraine to join the EU, since this implies the closure of the border in the East. At the same time, Yanukovych demonstrates a complete unwillingness to resolve these contradictions. What should Putin do? To persuade Yanukovych once again, knowing that it will not do anything until a strong support for integration with Russia is formed in the country? Trying to force your will on the Ukrainian elite?

In the 17th century, Moscow tried to push the hetman power towards closer integration in the conditions of war. This did not end well for Russia itself. Should Putin repeat the mistakes of Tsar Alexei Mikhailovich? Close your eyes and turn away? But we are talking about millions of compatriots who, as a result of the collapse of a single country, were separated by a border! We are talking about the territories for which rivers of Russian blood have been shed!

In my opinion, Putin’s position in these conditions is more thoughtful. She is pragmatic in economic terms. Moscow cannot fail to see that Ukraine is increasingly turning into a country dependent on imports. Today, even potatoes, sugar and lard are brought to Kiev from abroad. Unlike Ukraine, the Russian economy is developing new areas, and the meaning of imports of Ukrainian goods is increasingly declining. Hence the protective customs measures against Kiev. The same situation with the Ukrainian migrants, who in the bulk are unskilled labor.

But in the information plan, apparently, Russia plans to increase its presence. This will allow, at least, to deprive the apologists of the European integration of a monopoly in the Ukrainian information market. After all, it is no secret that in the country there are whole hordes of people raised on Western grants and, accordingly, biased journalists, political scientists and other experts.

In terms of foreign policy, it is more profitable for the Kremlin to develop relations with key players in the EU, primarily with Germany. In the end, it will depend primarily on the position of Berlin whether to sign the Association Agreement with Ukraine. And if the Germans see that there are more benefits from cooperation with Moscow, they will find a thousand excuses why the above document is not ready for signing.

Especially since in September 2013, the parliamentary elections will be held in Germany, and it’s not a fact that Angela Merkel will be able to form a new governmental coalition based on their results. And the Social Democrats since the times of Schroeder have been more loyal to Russia.

In the light of these events, you involuntarily ask yourself whether the EU and Russia will act with Kiev in the same way as the Moscow tsar and the king of the Polish-Lithuanian Commonwealth - with the corrupt Hetman's power in 1667 year?

Ctrl Enter
Noticed oshЫbku Highlight text and press. Ctrl + Enter
We are
What you didn't want to know about EnglandForerunner of Pereyaslav
Military Reviewin Yandex News
Military Reviewin Google News
201 comment
Information
Dear reader, to leave comments on the publication, you must to register.