Sergei Shoigu: Every morning for the Russian military should begin with the performance of the Russian National Anthem 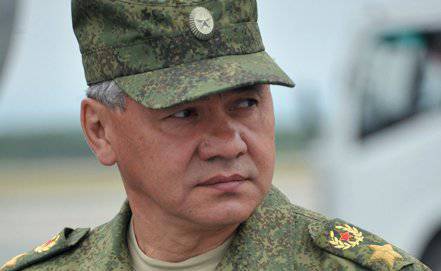 Every morning in all military groups of the Russian army will henceforth begin with the performance of the Russian National Anthem by servicemen. This order was given today by Defense Minister General of the Army Sergey Shoigu at a meeting of the Defense Ministry board when discussing the issue of spiritual, moral and patriotic education of servicemen.
“I ask the commanders and commanders to ensure the performance of the National Anthem of Russia. I instruct every morning in military groups to begin with the performance of the anthem, whatever the servicemen do,” said Shoigu.
The Minister also gave a number of other instructions. In particular, he instructed to compile a list of mandatory books for military-patriotic topics for military personnel to read.
Shoigu considers it necessary to prepare a short course stories the Russian army with the allocation of appropriate funds. If it is impossible to prepare a single history course for the country, it is necessary to prepare such a textbook for the army and introduce it into all military training courses, he said.
The minister recalled that "every self-respecting soldier of military service" in preparation for dismissal from the Armed Forces is preparing the so-called "demobel album." "I am inclined to ensure that the commanders take the lead in the process of producing the so-called" demobel albums ", since each military unit has its own history," said Shoigu.
The minister also stated that the army is facing the problem of drug use. In this regard, in the Military Medical Administration and in all specialized institutions, it is necessary to create a service for controlling possible drug use, through which everything must pass - from a soldier to a commander, set the task for Shoigu.
In addition, he ordered this year to complete the creation of the film studio at the TV channel "Star", noting that this film studio will be engaged in feature films, documentaries and, possibly, animation films. Film studios must be formed in the branches of troops and military districts, Shoigu said.

Ctrl Enter
Noticed a mistake Highlight text and press. Ctrl + Enter
We are
The State Duma is hurried with the adoption of the law on the patriotic education of young people
183 comments
Information
Dear reader, to leave comments on the publication, you must to register.