US modernize the army of Tajikistan

August 1 2013
74
Tajik President Emomali Rahmon yesterday held talks with the commander of the US Central Command, Lloyd James Austin. At the meeting, according to the press service of the head of the Tajik state, issues of modernization of the armed forces of the republic and strengthening the Afghan-Tajik border were discussed. The talks took place two days before Rakhmon’s visit to Moscow. 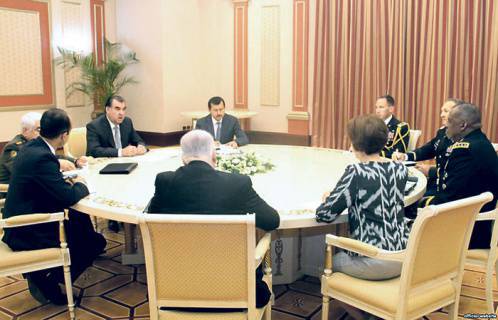 In recent years, the practice has developed - on the eve of the Russian-Tajik talks in Dushanbe an American envoy will certainly appear. The meeting of Rakhmon held yesterday and his forthcoming visit to Moscow are “aggravated” by the presidential elections in Tajikistan. NG has already written that in conditions of a severe socio-economic crisis in the republic, Rakhmon is counting on the support of the Kremlin.

But he will not give up on Washington’s support, if there is one. Especially in the military sphere. The subject of negotiations is known. On the one hand, this is a condition for the presence in Tajikistan of the 201 of the Russian military base and allowing it to use the Aini airfield. On the other hand, pedaling the issue of the withdrawal of the Russian base, the transfer of the Aini airfield to the US and NATO (possibly with the mediation of India), the deployment in Tajikistan of other military facilities of the same alliance.

The first US training center was opened a couple of years ago in Tursunzade, which is 45 km from the Tajik capital. There is training for the Armed Forces (AF) of Tajikistan. At the same time, the republic’s army remains the least equipped in the region. Weapon and military equipment available to the Tajik army, mainly from the Soviet era. According to experts, the combat capability of the armed forces of Tajikistan is low to such an extent that they are not able to cope with external threats on their own. During the previous meeting with Russian President Vladimir Putin in Bishkek during the informal CSTO summit Emomali Rakhmon, concerned about the possible threat from Afghanistan after the withdrawal of NATO troops, asked to speed up the provision of 200 million, which Moscow promised to modernize the Tajik army. But, without waiting for a prompt response from Russia, Rakhmon entered into negotiations with the United States.

Yesterday, at a meeting with American General Lloyd James Austin, he discussed regional security issues and the strengthening of the Afghan-Tajik border, which the United States has already been engaged in de facto since 2005. Earlier, the external borders of Tajikistan were guarded by Russian border guards, but today the question of their return is not being considered. As Tajik political analyst Sukhrob Sharipov said earlier, “Why should Russian children die in Tajikistan, because we only need help in strengthening the border’s material and technical resources ?!”. I talked with General Austin Emomali Rakhmon about the possibility of obtaining material and technical assistance for military and special units of Tajikistan.

Alexander Knyazev, an expert on Central Asia and the Middle East, told NG that "President Rakhmon did not seem to understand that multi-vector approach is for the strong and smart, and his regime does not apply." “It is clear that, discussing the price of the decision-making that is necessary, Rakhmon includes in it what is now the main thing for him: support in the upcoming presidential election. You can easily project the American position: Americans do not give guarantees in such cases, as the experience of Mubarak or Gaddafi indicates - they began to part with their “bitch sons” quite easily. Undoubtedly, Rakhmon will talk about his own guarantees in Moscow too, ”Knyazev believes.

The political scientist believes that Moscow should refrain from any guarantees to the Tajik president. “The real orientation on Russia in its activities has not been traced for fifteen years already - almost immediately after Moscow helped it come to power, establish a truce with the opposition and end the civil war. It seems that the Russian side needs to work more with the Tajik opposition, especially since it now objectively has more opportunities for this than Washington or London. But the range of these opportunities is narrowing rapidly, ”said Knyazev. In his opinion, Russia's policy towards Tajikistan, which strongly resembles, by the way, the situation with neighboring Kyrgyzstan, has been and remains unidirectional. “Using the methods of force and the administrative resource, Rakhmon might win the election, but this does not mean that he will retain the presidency for the next seven years. If Russia directly or indirectly designates support for Rakhmon, it will lose Tajik society and now, probably, forever, ”said Alexander Knyazev.

“By virtue of a multi-vector policy, including in the field of defense, Tajikistan uses Russian military aid and Russian military presence. But he also does not want to give up American assistance in the field of border security, equipping army and special forces. Not in the rules of the current leadership to give up anything. But help is help, and the trouble is that the authorities, having lost communication with the population, themselves narrow the support base inside and try to compensate for this with external support, ”Temur Varki, an expert on Tajikistan, told NG. According to him, a special theme is the border areas of Tajikistan. The republic is like shagreen skin: in the south in the Shurobad district Afghans feel at ease, and in the east the Chinese are settling down. Apparently, the authorities themselves have not decided where the boundaries of partnership obligations and relations of Tajikistan in the structure of the CSTO, in cooperation with the United States and NATO countries, with China end. “Therefore, the situation in which Tajikistan finds itself today is akin to dancing with three partners at once. In the official interpretation, this is called the balance of interests for the sake of stability. But the problem is that thousands of citizens of the republic are fleeing from this stability to other countries, primarily to Russia, ”Warki told NG. The expert did not rule out that after the next election victory of Emomali Rakhmon, the problems would be aggravated, which would cause another wave of large-scale emigration.

Ctrl Enter
Noticed oshЫbku Highlight text and press. Ctrl + Enter
We are
Tajikistan again deceived RussiaRakhmon in negotiations with Russia risks to outwit himself. Militants already at his gate
74 comments
Information
Dear reader, to leave comments on the publication, you must to register.