A visit to the fleets by Marshal of the Soviet Union by the Chief Inspector M. O. USSR M. K. S. 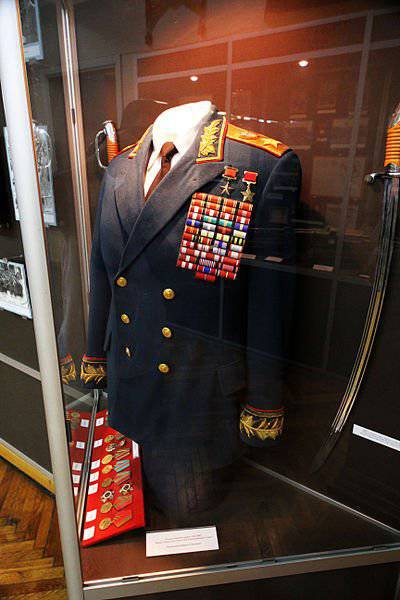 On the main inspector M. O. USSR in the Armed Forces there were many different tales. Indeed, for many years this important place for the defense of the country was held by a man of old age, as well as the General Secretaries of the Central Committee of the CPSU of that time. He would sit on the stove, and he depicted a thunderstorm of the Armed Forces.

During the inspection, command post exercises were held. Commander at the beginning of the exercise fleet reported to the Chief Inspector his decision on the withdrawal of fleet forces through the strait zone into the North Sea and the Atlantic. It was a very difficult task, because previously required to capture the entire pouring zone to ensure unhindered passage of ships. The Decision Document consisted of several glued sea charts on which the main actions of the fleet forces were plotted, taking into account the possible opposition of the forces of the probable enemy.

Back in the 5 class of a seven-year school, I was taught that the Gulf of Bothnia has shallow depths and is limited to shipping. In VVMU this was confirmed in a significantly expanded volume. Moreover, we all know that the bay is a part of the ocean, sea or lake, which penetrates deep into the land, but has free water exchange with the main part of the reservoir. On the sea charts, the northern part and the coastline of the Gulf of Bothnia, as a rule, are not shown, since no navigation value. The Chief Inspector, lulled by the ComFlot report, peacefully snuffled. Suddenly he woke up, carefully looked at the scheme and interrupted the admiral's report with a question: “Why do we throw all our forces through the pouring zone (shown on the diagram as a bottleneck), while you can go to the North Atlantic through the wide Gulf of Bothnia?” At first, the Commander thought that Marshal was joking, and he fell silent, not knowing how to argue so as not to offend him. Everyone in the hall during the report also stopped, no one could have imagined such a question. But the admiral was not in such alterations, an experienced sailor and military leader, and in such a situation he found a way out. “We will consider this question next time. Your remark will be considered our omission. ” Marshal smiled and the report continued. All were satisfied.

After completing the inspection of the Baltic Fleet, Marshal flew to the Pacific Fleet. He was met by the Senior Marine Head of Khabarovsk, the commander of the 49 Red Banner River Ships Division, Rear Admiral A. A. Appolonov. A guard of honor was lined up at the Bolshoi Khabarovsk military airfield. Descending from the ramp, the Marshal headed towards the meeting persons. By giving the command: “Attention. For the meeting on the right, to the guard! ”Rear Admiral A. Appolonov approached the Chief Inspector and gave a report. In response, deathly silence. Marshal looked closely at Appolonov, without uttering a word. Suddenly, the lieutenant general behind the Marshal, a tall man, in a military manner, pulled up, towering above the undersized Marshal, said loudly, addressing Appolonov: “He doesn’t hear. You scream to him. He will see your mouth open and realize that you are reporting ... ”. The rear admiral complied with the recommendation of the general. When Appolon finished screaming, Marshal saw that he closed his mouth and was silent, then the Chief Inspector greeted him and went to the car, which was waiting for him in 10 meters from the plane. Thus began the inspection of the Pacific Fleet by the M.O. inspection in the summer of 1978.

A few days later the Marshal arrived in Vladivostok, where the inspectors were already working, checking the fleet units and connections. In the evening, after listening to the latest report, the Marshal expressed a desire to watch a movie. He had several favorite films, including “Jolly Fellows”, “Volga-Volga”, and others. The Marshal's Adjutant drove these films with him so as not to search locally. This time, the entire inspectorate, which has seen these films hundreds of times already, was “punished” with the film Volga-Volga.

Everyone sat down in the small hall, and the film began. After 5 minutes, the marshal fell asleep, lightly snuffling in his sleep. After sustaining another 10 minutes, the movie stopped showing. They woke up Marshall and said that the film was over. The adjutant hinted to the Chief Inspector that the time was later and it was time to rest. Everyone who was on the viewing went to the exit from the fleet headquarters. Suddenly the Marshal stopped and said that he would like to watch another episode of the film he liked. Then he turned and went back to the cinema and fell asleep again. "Torture" continued. The next day, a parade of fleet rear officers was conducted. It was something. The truckers were last seen at the 10-15 years ago. Their bearing left much to be desired. People in the pre-retirement age, with bellies that hung over the ceremonial belts, they could hardly serve as an example of bravado for young people. Suddenly, and no one expected this, when passing the rear men, the system sounded: "Sing a song." Then the officers of the 4 (artillery-missile) department of the fleet struck at once: “Artillerymen, Stalin gave the order!”. The inspectors froze and remained silent until the end of the passage of the ranks of the officers, who picked up the familiar words of a well-known song from childhood.

Russian proverb says: "What is pop, so is the parish." In the USSR at the end of the seventies, the country's leadership consisted of long-livers who had long passed for 70. They held on to their positions with all that they could. They were not at all embarrassed by the question that by their inaction they only harm the Sun and the whole country. Together with the decrepit Chief Inspector of the profits and its general inspectors. One such 75 aged people moved around the city of Vladivostok in a passenger car, which was constantly followed by an ambulance car.

The last stage of the test was in Kamchatka. Marshal, an avid hunter, expressed a desire to "go to the bear." There were lots of bears. Developed a special operation codenamed "Bear." She was given special attention by the command, because the operation "Tiger" was canceled. Back in Primorye, Marshal prepared a special tribune, which cost the fleet 25.000 rubles. and a tiger to shoot. But it is not clear why the Marshal refused to hunt. Most likely, he was dissuaded, referring to the fact that only 59 tigers remained in the taiga.

So bear. We decided to take the beast from the air. We flew two helicopters. In one was Marshal, in the other accompanying persons. Seeing a running bear, the Chief Inspector took aim and fired a shotgun. At the same moment, from the second helicopter, according to the bear, they gave a line of a large-caliber machine gun and, just in case, threw an anti-tank grenade. The hunt was a success. The beast was defeated. Marshal was pleased.

The next target of his attention was the Northern Fleet. Knowing that when visiting the Northern Fleet, party and government leaders always visited submarines, the Marshal also decided to go out to sea on one of them.

It was a diesel missile boat XNUMHA project. Rising aboard, Marshal, along with the commander remained on the bridge before arriving at the dive point. The commander gave the appropriate orders, and the crew of the boat prepared to dive. Having received a report from the CP about this, the commander reported: "Comrade Marshal, allow me to dive?". Marshal agreed, the commander became ill. What did the commander hear? It turns out that Marshal said to him: “You dive, and I’ll stand here ...”.

After a short voyage, the Marshal arrived at the CP accompanied by an adjutant. After listening to the report of the commander, Marshal turned to the adjutant with the words: “We shall put on clothes” and took back his hands, waiting for his overcoat to be put on. Then he went to the ladder and began to climb to the bridge, forgetting that the boat is at a depth of 60 meters. It was necessary for the commander to explain again to the Chief Inspector that the boat was at depth, and in order to reach the bridge, it was necessary to ascend.

It would be fun if it were not so sad when you see who held such high posts in the state and did not understand at all that with their actions they caused direct harm to the defense capability of our state.

Ctrl Enter
Noticed oshЫbku Highlight text and press. Ctrl + Enter
We are
Diplomats of the People's Commissariat of Defense: on the eve and during the warRusso-Japanese War 1904-1905's. State of the Russian fleet. Bad luck and missed opportunities
Military Reviewin Yandex News
Military Reviewin Google News
58 comments
Information
Dear reader, to leave comments on the publication, you must to register.