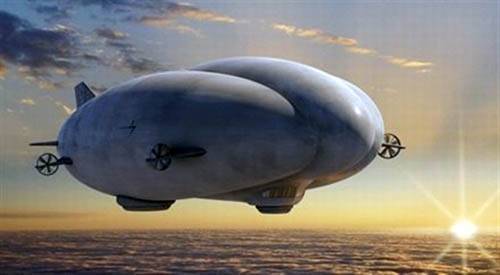 This fall, the US army in Afghanistan will replenish with another supercomputer. But it will be installed not in the central headquarters and not in command centers. He will soar at an altitude of 6 km above the theater of operations, aboard a huge airship, hearing and seeing everything that happens.

At least, it is on this fall, October 15, that the test flight of the soft airship, created by the Blue Devil program, is scheduled. It is reported that at present some parts of the impressive dimensions of the body of the apparatus have already been produced, and its assembly will soon begin. The US Air Force, however, has not yet finally decided on a set of sensors, listening devices, cameras and radars that will be placed on it.

Of course, today the Americans fighting in Afghanistan conduct very active reconnaissance from the air, listen to mobile phones and walkie-talkies. But all these actions are performed by a mass of various flying vehicles, and the coordination of their activity takes a lot of time and resources. Often, invaluable moments are missed. It was the idea of ​​combining dozens of different tools of modern intelligence into a single mechanism that was the starting point for implementing the Blue Devil project. Dozens of such devices, placed on a single device, connected by means of a powerful supercomputer, will be able to operate coherently - and, according to plans, within 15 seconds transmit information to already ground services.

Last year, testing of the system was carried on board specially modified aircraft, but, of course, it will work more efficiently on slow-moving, non-maneuverable, but surprisingly load-carrying and airships capable of an economical long flight. Therefore, the second phase of the Blue Devil program is to create a suitable device lighter than air. Task assigned to TCOM LP. "It will really be huge," said an anonymous source close to the Blue Devil team, "one of the largest aircraft created after World War II."

As planned by the leadership of the US Air Force, it is the large size that will provide the airship with the opportunity to take on sufficient reserves of fuel and helium for a long - for a start about a week - uninterrupted flight at an altitude of more than 6 km (normal airships rarely rise above 1 km). In the future, this period is hoped to increase to at least three weeks.

But of course, this is just a shell. The main thing in this intelligence system is electronic stuffing. With the help of rail guides, it will be able automatically or on command from the ground to push the necessary sensors and instruments to the observation positions. It can be listening devices, day and night cameras, radar, communication antennas - as well as dozens of cameras of the latest Wide-Area Airborne Surveillance System (WAAS). Mav6 LLC is responsible for integrating all of these components into a single system.

The weakest point of all this magnificence is the same human factor. For example, today watching videotapes made by the camera of each reconnaissance drone MQ-1 Predator is being done parallel to 19 analysts. And if we talk about a system equipped with WAAS (it includes 96 cameras that collect 274 TB of information every hour), it may require, as estimated by General James Cartwright, a couple of thousands of specialists only to view and select records.

However, it is precisely in this context that the developers of Blue Devil have high hopes for a supercomputer that can be placed directly on the aircraft. According to preliminary calculations, he will be able to process per hour up to 300 TB of data. The device, therefore, will not only collect information and send it to people, as is happening today, but also conduct its primary analysis and selection, sorting in accordance with a set of meta tags. People on earth will be able, using the same tags, to display already only the data that directly interests them at the moment.