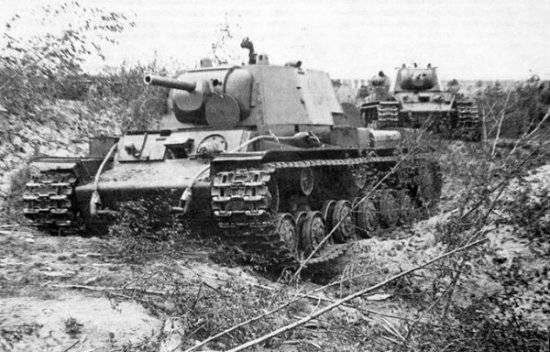 Many years after the end of the Great Patriotic War, a military-historical the conference. Speaking veteran tanker speaking about the role tank units in a defensive battle, referred to his own example and told about the battle on August 19, 1941, when the KV-1 tank crew, which he commanded, knocked out 22 German tanks near Leningrad.

One of the speakers, grinning, said that this was not and could not be! Then veteran Zinovy ​​Grigorievich Kolobanov handed over to the presidium a yellowed piece of front-line newspaper. The general in charge of the conference quickly looked through the text, called the skeptic to him and ordered: “Read aloud, so that the whole audience can hear!”.

“Only in the second hour of the day did enemy vehicles appear on the road.
- Get ready for battle! - quietly commanded Kolobanov. Slamming the hatches, the tankers instantly froze in their places. Immediately the gun commander, senior sergeant Andrei Usov, reported that he saw three motorcycles with wheelchairs in the sight. The order of the commander immediately followed:
- Do not open fire! Skip scouting!
German motorcyclists turned left and rushed towards Marienburg, not noticing the disguised HF in ambush. Fulfilling the order Kolobanova, did not begin to open fire on reconnaissance and the infantrymen from the military guard.
Now all the attention of the crew was riveted on the tanks going on the road ... They walked at reduced distances, substituting their left sides almost strictly at right angles to the HF gun, thus representing ideal targets. The hatches were open, part of the Germans sat on the armor. The crew even distinguished their faces, since the distance between the HF and the enemy column was small - only about one hundred and fifty meters.
... The lead tank slowly entered the intersection and came close to two birch trees - reference point No. 1, planned by the tank crews before the battle. Kolobanov was immediately informed about the number of tanks in the convoy. They were 22. And when seconds remained before the reference point, the commander realized that he couldn’t hesitate any longer, and ordered Usov to open fire ...
The lead tank caught fire from the first shot. It was destroyed, not even having time to completely pass the intersection. The second shot, right at the intersection, was defeated by the second tank. Cork formed. The column shrank like a spring, and now the intervals between the remaining tanks have become minimal. Kolobanov ordered to transfer the fire to the tail of the column in order to finally lock it on the road.
But this time, Usov failed to hit the closing tank from the first shot - the projectile did not reach the target. The senior sergeant corrected the scope and fired four more shots, destroying the last two in the tank column. The enemy was trapped.
At first, the Germans could not determine where the shooting was going on, and opened fire with their guns at haymen, which immediately caught fire. But soon they came to their senses and were able to detect an ambush. A tank duel of one KV against eighteen German tanks began. A whole hail of armor-piercing shells hit Kolobanov’s car. One by one they plowed through the 25-mm armor of additional screens mounted on the HF turret. There is no trace left of disguise. Tankers were suffocating from the powder gases and stalled from the numerous blows of blanks on the tank's armor. Charging, he is also a junior driver mechanic, Red Army soldier Nikolai Rodenkov worked at a furious pace, driving a shell after a shell into the breech of a cannon. Usov, not looking up from the sight, continued to fire at the enemy column ...
The Germans, realizing that they had fallen into a trap, were trying to maneuver, but the KV shells hit tanks one by one. But the numerous direct hits of enemy shells did not cause much harm to the Soviet machine. The apparent superiority of the KV over the German tanks in the strength of the fire and in the thickness of the armor had an effect. The infantry units following the convoy came to the aid of the German tank crews. Under the cover of fire from tank guns for more effective shooting at HF ​​the Germans rolled anti-tank guns onto the road.
Kolobanov noticed the preparations of the enemy and ordered Usov to hit high-explosive fragmentation projectile on anti-tank guns. With the German infantry, the military guard, who was behind KV, entered the battle. Usov managed to destroy one VET together with the calculation, but the second managed to make several shots. One of them broke the panoramic periscope, from which Kolobanov watched the battlefield, and the other, striking the tower, jammed it. Usov managed to break this gun, but the HF lost the ability to maneuver the fire. Large dovoroty guns to the right and left could now be done only by turning the entire hull of the tank. Essentially, the KV became a self-propelled artillery installation. Nikolai Kiselkov climbed onto the armor and installed a spare periscope instead of the damaged one. Kolobanov ordered the foreman mechanic, Senior Nikolai Nikiforov, to withdraw the tank from the caponier and take a spare firing position. In the eyes of the Germans, the tank backed out of his hiding place, drove off to the side, stood in the bushes and re-opened fire on the column. Now I had to work hard to the driver. Fulfilling Usov's orders, he turned HF in the right direction. Finally, the last 22 tank was destroyed. During the battle, and it lasted more than an hour, senior sergeant A. Usov fired 98 shells on enemy tanks and anti-tank guns. ” (“The hero who did not become a hero.” Alexander Smirnov).

What can explain such a fantastic success of the crew of Lieutenant Kolobanov?

First of all - the combat experience of the commander. As part of the 20 heavy tank brigade as a company commander, he had the opportunity to participate in the 1939-1940 Soviet-Finnish war. The brigade, armed mainly with T-28 tanks (three turrets, one with a 76-mm cannon and two machine-gun), was the first to reach the Mannerheim line. It was then that Kolobanov for the first time burned in a tank. In the battle at Lake Vuoksa again I had to flee the burning car. The third time he burned during the attack on Vyborg.

But the question arises - why was such an experienced tanker in August 1941, only a senior lieutenant?

13 March 1940, when the peace treaty between the USSR and Finland came into force, the soldiers of the two previously opposing armies in a number of sectors of the front began to “informally communicate” with each other. Vodka and alcohol appeared ...

Took part in this and the company Kolobanova, which either did not consider it necessary to stop it, or could not do it. He was fired from the army to the reserve.

Since the beginning of the Great Patriotic War, Kolobanov was called into the 1 tank division created on the basis of the 20 heavy tank brigade in which he fought during the war with the Finns, was given the rank of senior lieutenant and was appointed commander of a company of heavy tanks KV.

Was not a newcomer in battle and gunner senior sergeant Usov. Called to the Red Army in 1938, he participated in a campaign in Western Belarus as assistant platoon commander of one of the artillery regiments, during the Soviet-Finnish war he fought on the Karelian Isthmus. After graduating from a special school of commanders of heavy tank guns, he became a tank player ... An experienced gunner, who retrained to a tank gunner’s gunner, was not a boy after training, and fired Usov, respectively.

The tank KV-1, with all the shortcomings of its running gear, was thick, and the thickness of the armor and the power of the gun really surpassed all the tanks that the Germans had in 1941. In addition, Kolobanov’s car also had an additional armor screen installed. It was very difficult for the Germans to hit him in a position chosen in advance by an experienced commander with a dug caponier. After the first and the last cars were hit, they were trapped - there was a wetland around the road. We must pay tribute to their perseverance and professionalism - they managed to achieve many hits in such a difficult situation, the tower was wedged.

And, of course, the absence of German in this battle was very important. aviation. How many times did the Germans destroy the most successful ambushes, causing diving bombers "Yu-87", capable of bombing with very high accuracy.

The feat of the crew of Kolobanov was recorded in print immediately, in 1941 year. Now, tank history experts acknowledge the phenomenal performance of this battle.
For this unique battle, the commander of the 3 tank company, Senior Lieutenant Kolobanov, was awarded the Order of the Military Red Banner, and the commander of his tank gun, Senior Sergeant Usov, the Order of Lenin.

The question of why this feat was not marked by the Golden Stars of Heroes remains open so far ...