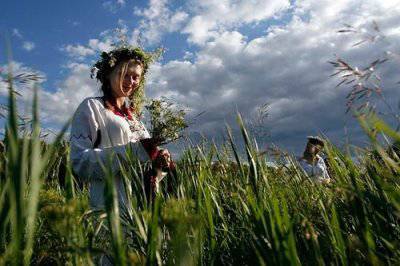 Modern generations of Russian people go through difficult historical a school that should free them from all political and national illusions and open their eyes to the originality of the Russian people, to the precious originality of its culture, to its state tasks and to its enemies. Enough blindness, naivety and gullibility! Anyone who loves Russia must vigilantly observe, think objectively and draw conclusions. Only then the lessons sent to us will not be wasted.


While living in pre-revolutionary Russia, none of us took into account the extent to which organized public opinion in the West is against Russia and against the Orthodox Church. We visited Western Europe, studied its culture, communicated with representatives of its science, its religion, its politicians, and naively assumed from them the same friendly complacency towards us, with which we turn to them; and they watched us, not understanding us and leaving to themselves their thoughts and intentions. We, of course, read the visionary and wise N.Ya. Danilevsky (“Russia and Europe”, p. 50) these warning, precise words: “Europe does not know (us) because it does not want to know; or, better to say, he knows what he wants to know — that is, how he corresponds to her preconceived opinions, passions, pride, hatred and contempt ”(we add only this: and her power-hungry intentions). We read and thought: “Is it really true? But do we have allies in Europe? After all, Europe counts with the voice of the Russian Government, and even fawns on Russia! Not all the people there are infected with hatred ... And why should they hate us? ”

Today, we must answer all these questions for sure. Danilevsky was right. Western nations are afraid of our number, our space, our unity, our growing power (until it really grows), our spiritual and spiritual structure, our faith and church, our intentions, our economy and our army. They fear us; and for complacency they inspire themselves - with the help of newspapers, books, sermons and speeches, confessional, diplomatic and military intelligence, backstage and salon nashepty - that the Russian people are barbarous, stupid, insignificant, accustomed to slavery and despotism, to injustice and cruelty ; that his religiosity consists of dark superstition and empty rites; that his bureaucracy is distinguished by wholesale corruption; that a war with him can always be won through bribery; that it can be easily invoked on the revolution and infected with the Reformation — and then dismembered, to bend, to remake in its own way, to impose upon it our callous rationality, its “faith” and its state form.

Russian emigrants who love Russia and are faithful to it, who do not disappear by someone else's preaching and not serving in foreign intelligence services, are obliged to know all this, to follow that contemptuous hatred and the plans they have been carrying; they have neither grounds, nor the right to wait for salvation from the West, nor from Pilsudski, nor from Hitler, nor from the Vatican, nor from Eisenhower, nor from the world backstage. Russia has no sincere well-wishers in the world. The Russian people can only rely on God and on themselves. The Russian people can only free themselves: to grind the Bolshevik yoke in slow flour; instill the national Russianness of the party periphery; to strengthen their spiritual strength in catacomb Orthodoxy; and slowly but steadily loosen the Council, its bureaucracy and its territorial clash; and then wait for a favorable world situation, reset hypnosis of the communist devil and return to your historical path. And we, Russian patriots scattered everywhere, must understand this, utter it to ourselves and, helping this internal process with all our might, prepare for this historic hour in order to hurry to help our people in time, with firm faith in God, with new creative ideas, with thoughtful plans, with all the will energy, which would then be required from the Russian people.

The Russian people will be free and revived only by their own state, and each of us (regardless of age and generation) will be all the more necessary for them, the more they will be able to observe their independence, their independent opinion, their energy, their spiritual “neprodannost” and “invisibility” in emigration. . We know that there are people who think and act differently, all the time trying to “tie their shuttle to the stern of a large ship”; cling to the "Pilsudski", then to the "Hitler", then to the Vatican, then to the world behind the scenes. And, knowing this, we warn them: their ways are anti-national, spiritually false and historically hopeless. If they are “supported”, then only on a certain condition: to serve not Russia, but the interests of the supporter; to reckon not with the Russian national good, but with the program donor. They may be helped, but not to save and build Russia, but to act in it at the direction of someone else’s headquarters or someone else’s government; in other words, they will be helped to acquire the title of foreign agents and Russian traitors and to earn the contempt of the Russian people forever.

Do we really need to remember the history of these thirty years? The story of how the Russian white armies were abandoned by the French in the south, the British in the north and Czechoslovakians in Siberia; the story of how Pilsudstky reacted to Denikin and Wrangel, how Baron Malzan agreed with the Soviets in Rapallo; how Lloyd George hastened to start trading with the "cannibals", and German Reich Chancellor Wirth invested the Vatican capital in forest concessions in the Russian north; how in Moscow Brockdorf-Rantzau had fun at night with Chicherin's music and something else; as a pater (and then prelate) Michel d'Erbigny twice (1926 and 1928) traveled to Moscow to conclude a “concordat” with Satan, who was known to him, and, returning, printed abominations about the Russian people and the Orthodox Church ... Is all this and much, much more forgotten?

It would be extremely interesting to read honestly written memoirs of those Russian patriots who tried to “work” with Hitler: did they meet with an understanding of the “Russian problem”? sympathy for the sufferings of the Russian people? Consent to free and revive Russia? At least on the terms of "eternal German-Russian friendship"? And yet: when did they manage to consider that they are being brazenly carried out? When they guessed that neither foreign policy (at all!), Nor war (at all!) - are not being fought because of other people's interests? When each of them came the moment that he, hitting his head with a fist, called himself "a political blind man who was involved in a dirty story", or else "a naive armor-bearer of the Russian national enemy?" ..
For years we have been witnessing all such attempts by Russian émigrés, and we all again and again ask ourselves: from which clouds have these inhabitants fell to the ground? Where did they get these sentimental dreams of “disinterestedness” of international politics and of the “wisdom” of foreign headquarters? where do they have this confidence that they will be able to “persuade” and lead such-and-such (anyway!) united foreign center with its biased decisions, and not he will play them and use them like runners-up semi-negotiators? How many were there, such ploys! They conceived, hoped, hoped, wrote, filed, “cooked up”, whispered and boasted of success ... And what came of all this? ..

But there were more “clever” ones: these soon realized that Russian patriotism did not promise success, that it was necessary to go for separatism and the dismemberment of Russia. Before our eyes, one such “figure” invented the idea of ​​“the Turan national minority, oppressed by Russian despotism and eager to adopt the Catholic faith”; and now, he already had a speech in front of the members of the Hungarian parliament, to whom he expounded his “projects”, and he had already received the Hungarian order ... And then? Then - he died, and Hungary fell first to Hitler, and then to Stalin. Meanwhile, a group of emigrant separatists whispered with the Germans about the "liberation" (?!) Of Ukraine and created a powerful center of separatist and anti-Russian propaganda in Berlin, while Hitler did not disperse them as superfluous. And here, before our eyes, Russian emigrants poured into the world behind the scenes, hoped to instill in her understanding and sympathy for Russia and left the stage: some publicly announcing that they stumbled upon the requirement of blind obedience and steadfast hostility to national Russia, others voluntarily disappearing behind iron curtain, third, surrendering their positions and ending their lives in the cemetery.

Years passed, the convulsions of the Second World War ended. And so, again, the same attempts began to “tie their black-out to the stern of a large ship”; consolidating in advance with his course and direction. And again you ask yourself: what is this - all the same childish naivety or much worse ?! For, in essence, none of the foreigners did not see the light at all, did not change his mind about anything, did not change his attitude towards national Russia and did not recover from his contempt and lust for power. And those of us who have the opportunity to follow world public opinion, with alarm, foresee in the future all the same movement along the same tracks, leading Western politicians into a dead end of past mistakes.
No, Russia will be saved only self-state, and we all need to observe our full spiritual independence!

Ctrl Enter
Noticed oshЫbku Highlight text and press. Ctrl + Enter
We are
About Stalin and KhrushchevFunctional stupidity and national stupidity
58 comments
Information
Dear reader, to leave comments on the publication, you must to register.