Syrian conflict - the path to the creation of a Kurdish state?

July 31 2013
68
In July, 2013, a lot of events occurred, again prompting analysts and journalists to think about the imminent creation of a Kurdish state. The basis for the emergence of statehood can serve as the territory of Syria near the Turkish border, where the Kurdish militia fights against opposition fighters. Moreover, if the army of Bashar al-Assad is cramping the latter, the former are supported in the fight against the Islamists by both the SSA and the Turkish Kurdish Workers Party. The Turkish authorities are concerned that the war could spill overseas, which is fraught with the unification of Turkish and Syrian Kurds. Moreover, recently Kurdish leaders from Iraq, Iran, Syria and Turkey met in Iraqi Kurdistan. Their meeting was held on the eve of a major conference. 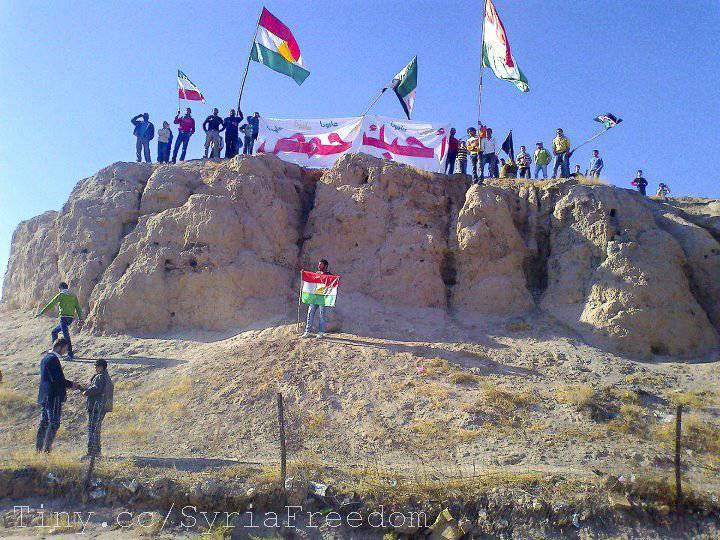 A week ago, there were reports in the media about clashes between Kurds in northeastern Syria and Islamist radicals. Igor Isakinsky and Konstantin Volkov ("News") told that the fighting in the province of Cancer between the Kurds and Islamist opposition has become fierce. The Kurdish brigade militia captured the commander of the Islamic Emirate of Iraq and the Levant group Abu Musab, who, according to the Syrian Observatory for Human Rights, in the evening of July 21 was allegedly exchanged for 300 of captured Kurdish civilians.

The head of the permanent delegation of the Federation Council in the Asian Parliamentary Assembly, Rudik Iskuzhin, explained that the Kurds living along the Turkish border had previously taken advantage of the anarchy that had arisen, had established militia and established control over many settlements in the northeast, including even those dominated by the Syrian population. According to Iskuzhin, the goal of Syrian Kurds is to achieve wide autonomy.

An activist of the Kurdish democratic movement in Syria, Radwan Ali Badini, states:

“We helped create new administrative bodies in cities and villages. Without this, neither the courts nor the utilities worked here. Everything went peacefully - there were no clashes with either the regular army or the opposition. ”

A member of the opposition Syrian National Council, Mahmoud al-Hamza, says that part of the Kurds want democracy and preserve the integrity of Syria, and another part is referring to the example of Iraqi Kurdistan. According to al-Hamza, among the Kurdish militia fighting are soldiers who have been trained in the Iraqi peshmerga camps, as well as activists of the Kurdistan Workers' Party.

20 July in the world press there were reports of the capture of the city of Ras el-Ain by the Syrian Kurds. The city passed from the "Front of Nusra" under the control of the Kurdish militia.

"Euronews" indicates that the city and border checkpoints control the Kurdish self-defense forces. With the Turkish military clashes were not.

A week earlier, the Kurds made Ankara a “last warning”. In a written statement circulated on 19 July, the executive board of the Union of Kurdish Communities stated that the Turkish authorities are seeking to thwart the process of democratic settlement. Reported by IA "REGNUM" with reference to the agency Firat.

SKO criticized the government of Erdogan for not allowing independent doctors to treat the prisoner Abdullah Ocalan, as well as for failing to ensure the regular visit of Ocalan by the delegation of the Party for Peace and Democracy (BDP). The Kurdish movement has warned the ruling party of Turkey that the government will have to answer for the impasse in the process if it does not take concrete steps as soon as possible.

Moreover, the document notes that the Turkish government is making efforts to break the peace in the northern regions of Syria, controlled by Kurdish forces, by supporting armed groups there, such as the Al-Nusra Front. According to the Kurds, the Turkish authorities have the goal of eliminating the gains of the Kurdish people in this region.

Three days later, the BDP held a rally in Istanbul, which aimed to urge the government to move forward in the process of a Kurdish settlement. Reported by IA "REGNUM" with reference to "Doğan".

“If you are really persistent in the matter of this process, we want to see concrete steps,” said BDP deputy Sabahat Tuncel under a banner reading “Government, take a step.” - Worldwide, confidence-building measures are important in times of conflict. Without these steps, neither peace nor settlement are possible. ”

Tuncel said that the possible emergence of a new Kurdish autonomy in the north of Syria is not dangerous for Turkey.

As for the Syrian Kurds, they deny plans to create their own government. The secretary general of the Kurdish Democratic Union Party, Salih Muslim Muhammad, denied media reports that an independent Kurdish government was allegedly planned to be created in northern Syria, 21 reported in July IA "REGNUM".

The party leader said that the organization is now going to take a series of measures aimed at improving the welfare of the Kurdish population living in the north of the country. But the Kurds do not have any intentions concerning either the formation of their own government, or the implementation of a "split" from Syria.

However, on this score there are other opinions. Opposites.

As Olga Haldyz says ("Voice of Russia") Ankara is concerned that clashes between the fighters of the Free Syrian Army and the units of the Kurdish militia continue near the borders of Turkey.

The Turkish General Staff reported on the strengthening of security measures in the south-eastern borders of the country and on the implementation of a multiple response to shots from abroad "in accordance with the rules of use of armed force," and Foreign Minister Ahmet Davutoglu said that Turkey is forced to take measures that " are not directed against any particular group. "

Rushen Chakyr, a columnist for the Vatan newspaper, writes that история The region has examples of how leaders in Ankara, Tehran, Baghdad and Damascus forgot about the problems between themselves, as soon as the Kurds had the opportunity to get on their feet, and jointly developed a strategy against them:

“As a result of this, the Kurds have all the time been the injured party. However, in the 21st century, we are witnessing how the Kurds break this vicious circle. What is happening - first in Iraq, then in Turkey and, finally, in Syria - enables the Kurds to play the role of an independent actor on the regional scene. ”

Fighting on the Syrian territory between Kurdish troops and Islamists Turkish journalists analyze in conjunction with the meeting of the Kurdish leaders of Iraq, Iran, Turkey and Syria held yesterday in Iraqi Kurdistan. This meeting precedes a large-scale conference.

“The armed conflict that began in Seryökaniye (Syria) spread throughout the entire territory where the Kurds live, and made me forget all the contradictions that exist between them. Then, the PKK, then the leadership of Iraqi Kurdistan, declared its readiness to help the Syrian Kurds. All this suggests that “Rozhava” (the so-called Western Kurdistan, a Syrian territory populated by Kurds) for all Kurds has become a kind of Palestine. ”

And the journalist of the Turkish newspaper Milliyet, Hassan Pulur, believes that events in the region speak of laying the foundations of a “Federally Independent Kurdish State”.

It is difficult to judge how events will unfold further, but one thing is clear: the Kurds will strive to use the situation that has developed today in their favor. As for the possible reaction of the Erdogan government to the Syrian border victories of the Kurds, analysts have been writing about the non-publicized support of Islamists by Ankara for a long time, this is no secret to anyone. The double purpose of such support is not a secret - firstly, to counteract the troops of Assad, whom Erdogan called the “butcher” and the “murderer”, secondly, to weaken the militia of the Kurds. Obviously, the support of the anti-Syrian Islamist forces by Erdogan will continue, despite the expressed displeasure of the Union of Kurdish communities. At the same time, Erdogan is unlikely to enter into direct confrontation with Kurds: he has enough problems with Syrian refugees and mass protests that began on May 9th in Gezi Park. In addition, the government promised to settle the Kurdish issue, and now is the wrong time to give up its promises.

Observed and commented on Oleg Chuvakin
- especially for topwar.ru
Ctrl Enter
Noticed oshЫbku Highlight text and press. Ctrl + Enter
We are
War in Turkish KurdistanTurkey against the Kurds. Is there a new phase of conflict ahead?
Military Reviewin Yandex News
Military Reviewin Google News
68 comments
Information
Dear reader, to leave comments on the publication, you must sign in.