The death of the Navy Museum. Sailors in the capital have lost their last pier 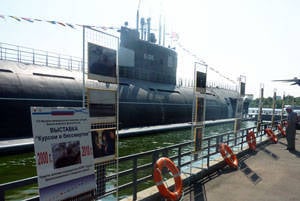 At the next historical round, fate played a cruel joke with Moscow, the capital of the sea power: it lost not only the General Staff of the Naval fleet, but also the last berth, where the B-396 diesel submarine (formerly the Novosibirsk Komsomolets) was permanently moored, the world's only transport and landing craft "Orlyonok" and the Skat hovercraft.

As a result of such a reorganization in the midst of museum activity from 23 in May 2013, the museum complex was excluded from the register of legal entities, that is, it actually ceased to exist as an independent cultural institution that would celebrate its tenth anniversary this year. The name of the museum also disappeared, and the direction of its activity, which had been preserved for the whole of this period, while the unique samples of ships and artifacts so far became just attributes of the park zone. Thus, the Navy is really deprived of the last site in Moscow, where until now actively worked to preserve naval relics, military-patriotic education with a sea bias. After the Naval Headquarters moved to St. Petersburg and liquidated its club with Navy veterans and young sailors, the naval cadets of the capital still had hope that naval traditions, including the rise of naval a flag, meetings of veterans and active officers of the fleet with students of the naval cadet corps and schools of young sailors, a solemn march under the naval flags, especially on the Navy Day, beloved by all citizens. But this hope collapsed overnight.

Now the situation with the museum is deteriorating every day. 28 in May, the diesel submarine B-396, which was turned into a modern unique museum complex by the hands of factory workers-Severodvintsev, is a kind of pride of the national military-industrial complex, which has almost no analogues abroad, was disconnected from the city’s power grid and closed to a granary lock. By order of the Department of Culture, from that day on, excursions to the compartments of the boat are not conducted, it is closed under the specious pretext of reconstructing the ship and the embankment for several years. Now, the fate of experienced employees (especially guides, museum workers) hang in the balance, and some have already been fired. On the territory of the museum embankment according to the plans of the park “Northern Tushino” a usual exhibition complex is already being built. Everything is being done to erase the naval spirit from the park.

The museum staff and veterans of the Navy are sounding the alarm, turning to the leadership of the country and the city with letters, still hoping that the state will pay attention to restoring the status and focus of this unique museum complex, so important for the heroic and patriotic education of Moscow and not only young people. But the importance of this education is spoken of by the authorities at every meeting with veterans and young citizens, especially during election campaigns (it does not matter, the President of the State or the Mayor of the capital). It seems that in the high offices of the mayor's office they don’t even know what the state of the museum complex is, if until July they published in local newspapers announcements of a monthly free visit to the Navy Museum in Moscow, access to which they themselves had stopped.

You can also stop the destruction of the museum, its funds and exhibits, if the Moscow authorities positively decide on the allocation of money for the preservation of ships, the construction of a normal museum building (as planned by previous decrees of the Moscow government), and also restore the status of the museum and its focus, even as part of the museum and park complex "Northern Tushino". But this should be publicly announced in the media. Finally, it is possible to offer the city authorities to transfer the museum complex together with unique ships to the Department of Culture of the Ministry of Defense of the Russian Federation with the subsequent inclusion of exhibits in the collections of the Central Museum of the Armed Forces of the country. After all, the Moscow teenager who is interested in military history will not find such ships either on Suvorov Square or on Poklonnaya Hill. In the meantime, time is working against us, ordinary people, who still remember the glorious deeds of the Navy Power.