July 30 2013
28
The company SMP Robotics, located in Zelenograd, has created and launched a production of robot patrols, known as the “Tral Patrol 3.1”. The autonomous mobile tracking system “Tral Patrol 3.1” is intended for patrolling and guarding large objects and identifying foreign moving objects in the jurisdictional territory. Typical objects of use of the security robot “Tral Patrol” include: oil and gas storages, warehouse complexes and territories of enterprises, energy industry facilities, coastal zones of tourist villages and bases, sections of country houses and household plots.


The robot is able to move along a pre-planned route of movement (there may be several routes) and explore the protected area for the appearance of uninvited guests on it. To monitor the environment on the robot, several survey cameras were mounted, as well as one high-resolution dome camera. If the robot detects a moving object, it automatically switches to the target tracking mode and sends an alarm to the central guard post. In the event that 2 or more patrol robots are used in the protected area, they can exchange alarm information between themselves. In this case, other robots that are on the trajectory of its movement are included in the chain of support of a suspicious object.

The robot guard is built on the basis of an unmanned electric ground chassis and is able to move along a pre-programmed route without the participation of the operator. The Russian company-developer initially made a bid in favor of the use of visual positioning instead of more modern laser scanning systems such as LIDAR, due to the high cost of the latter. To determine its location, the robot uses the method of analyzing visual landmarks, and the detour of sudden obstacles and the choice of the best path are realized thanks to stereoscopic vision. During each automatic passage along a given route, the robot guard checks the landmarks in his memory with the surrounding terrain and, if necessary, updates it. This model allows you to correlate and supplement the available information about the route, depending on seasonal changes in the landscape, time of day, weather conditions. 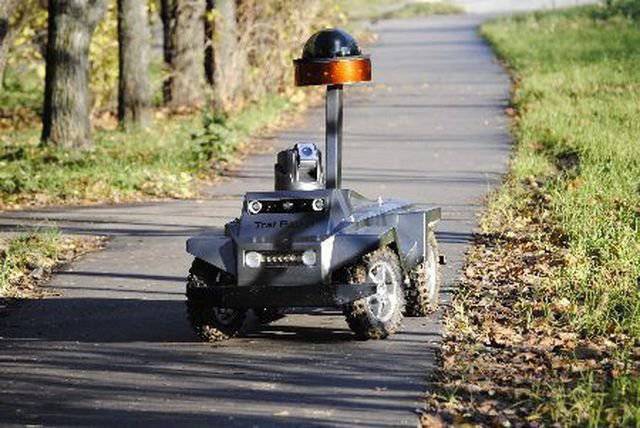 The Russian security robot used the SRX 1 wheeled chassis, which in the warm season is able to drive about 24 kilometers on a single battery charge at an average speed of 5-7 km / h. But the chassis has a number of drawbacks, namely, insufficient cross-country terrain and snow drifts. According to representatives of the SMP Robotics company, at present, work is also underway on the tracked version of the chassis for this robot, which can significantly improve maneuverability and facilitate operation in the winter time period. According to company representatives, the robot patrol is only one of the possible options for using an unmanned landing gear. The intensity of development and the development of modern robotics suggest that over time, robots will be able to solve much more complex tasks.

The Tral Patrol 3.1 system, presented by SMP Robotics, is intended for the protection of objects of large extent and area. This system consists of a self-propelled chassis, which houses rotating and viewing cameras, as well as a workplace for the operator of the complex. The chassis of the robot moves along the route under the control of the built-in motion control unit, guided by the map of the protected object. Through distances that are sufficient for detailed video surveillance of all parts of the terrain, the robot makes stops, during which it searches for movement in the territory protected by it.

If a movement is detected on an object, the robot will point to its source of the PTZ camera and analyze its enlarged image in order to recognize the moving object. The video computer available on the robot, analyzing the approximate image of the object, concludes the danger level of the situation and either allows the object further movement or sends the video over to the operator and turns on the strobe and siren. In case the visibility is insufficient, the chassis automatically approaches the detected moving object. The robot is able to detect a person at a distance of 60 meters by day and 30 meters at night. 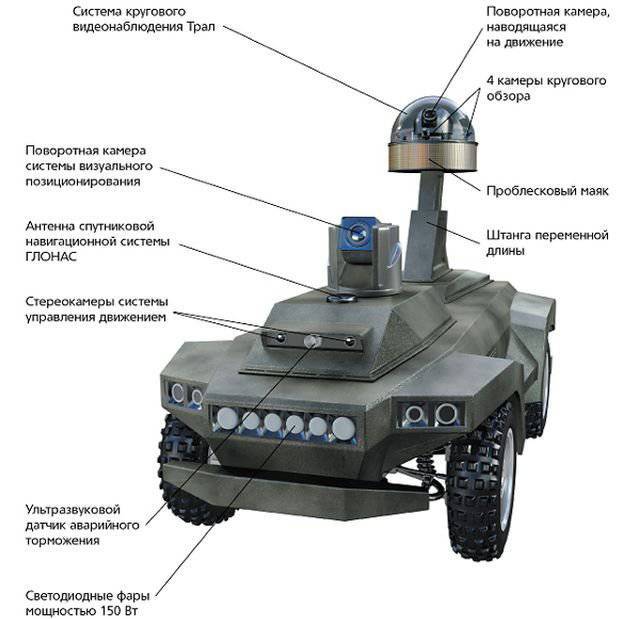 The capacity of the batteries installed on the robot is quite enough for 4,5 hours of continuous driving, as well as 12 hours of video surveillance. After making up the entire charge of the battery, recharging is required, which is performed in 6-8 hours. During charging, patrolling of the protected area can be entrusted to other security products. In order to ensure the continuity of the process of protecting an object and its sufficient reliability, it is possible to put into practice patrols in a group. In this mode of operation, mutual movements of products can be synchronized in order to ensure uniform coverage of the entire protected area. At the same time, control over the work of all patrol robots is performed from a single place of the system operator.

Separately, it is worth noting the fact that the design of the chassis of the robot is implemented wireless charging of the battery. This is a fairly modern technology that has not yet gained widespread acceptance, but in the case of a robot patrol it can be called more than appropriate. In the case of a low battery charge, the robot is able to put itself on charge, and then go further along its route.

Training of the robot on a patrol route is carried out at one time, by posting a mobile chassis along all the tracks of the object that are available for patrolling. The control of the movement of the robot patrol in the training mode is carried out by the operator using a manual control panel. After completing the training, the patrol route, as well as the static observation points will be displayed on the computer screen at the workplace of the system operator. 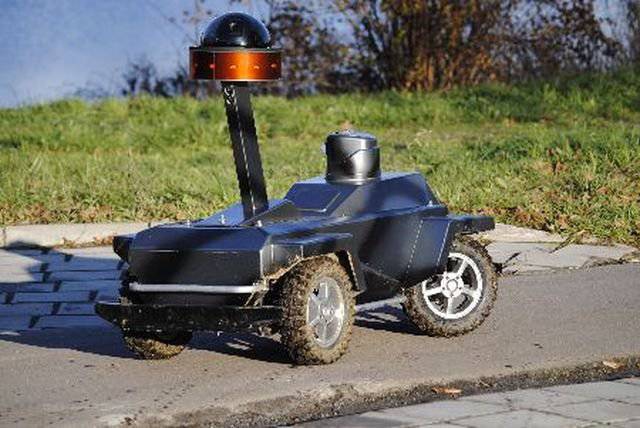 The robot's self-propelled chassis allows it to navigate through the prepared terrain of a forest-park landscape. To move at speeds up to 7 km / h, the robot has enough footpaths with a width of no more than 0.7 m, while snow cover is allowed up to 20, see depth, puddles depth to 10, as well as fallen branches. The robot's chassis is able to make a turn with a radius of less than 1,5 m. And overcome the steps up to 14 height, see.

The movement control of the self-propelled chassis is carried out fully automatically, without the participation of the operator, using video analysis of the environment and a laser system of detour of obstacles. Binding to the topography of the route is performed using the GLONASS receiver signal, navigation is based on the inertial system. The robot is set in motion with the help of electric motors, which, together with the small size of the robot, makes it unobtrusive and quiet.

Depending on the area of ​​the object, the duration of the patrol change and the number of observation positions, one or several patrol robots can be used on one guarded object. Group patrols of the protected area by robots are based on the principle of linked reciprocal movement. This principle provides for the exclusion of overlapping of the observation zones and allows for continuous monitoring of responsible areas from different positions.

In some cases, the construction of robotic protection of objects is best to start with the use of a single robot. Such an approach makes it possible to rationally prepare the necessary infrastructure: observation positions, driveways, and battery recharging posts. And also allows staff to get used to the robot and thoroughly understand the method of its use. At the same time, if it is necessary to strengthen security measures at the facility, it is sufficient to simply replenish the grouping of existing patrol robots with new models.