July 31 2013
18
Often, new projects of weapons and military equipment in addition to the alphanumeric index get their own names. Such names sometimes look strange or surprising (this is even an occasion for appropriate jokes), but there are other cases when a favorite word is excellent for designating a project. A model example of such a coincidence is the British experimental fighter project tanks FV4401 Contentious. So many innovations and bold ideas were simultaneously used in this machine that its future turned out to be a subject of mass debate. 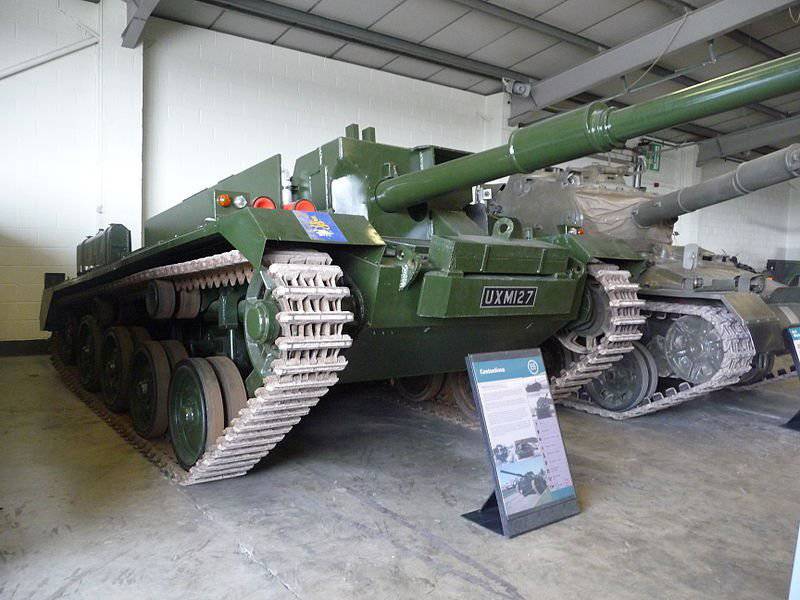 In the sixties of the last century, Great Britain was actively working on a large-scale project Prodigal, whose goal was to create a family of light armored fighting vehicles for various purposes. Before starting the main design work it was necessary to determine the requirements and appearance of promising technology. The result of this development phase of the project Prodigal was an experimental tank destroyer FV4401. The main project at that time was in its early stages, thanks to which British tank builders received the most extensive opportunities.

However, at the insistence of the customer, the FV4401 project had to combine a lot of different technical and tactical qualities, which led to its considerable complication. In the near future, the military wanted an air-transportable anti-tank self-propelled artillery installation with high firing characteristics, including firing rate. By this time, the tanks of the probable enemy received sufficiently serious protection, which required installing a powerful and, consequently, heavy weapon with corresponding recoil characteristics on the FV4401. In addition, designers were faced with the problem of air transport. Fortunately, the experimental nature of the project made it possible to embody the most ambitious ideas in the metal. 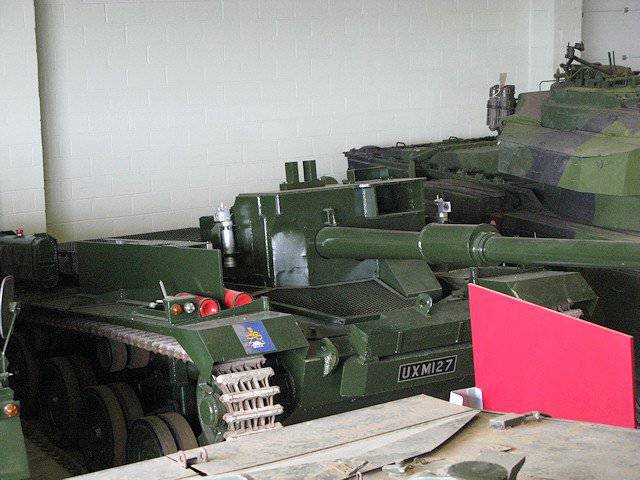 Selection of the main weapons for the experimental tank destroyer was simple. Back in the late forties, the British military had at their disposal a Ordnance QF 20 pounder 84 millimeter rifled tank gun. At the beginning of the sixties, a sub-caliber projectile with an initial flight speed of 1465 m / s, capable of piercing about 290 millimeters of homogeneous armor, appeared in the arsenal of this weapon. The presence of such a powerful, but comparatively small and light instrument simply did not leave a choice. Tank destroyer FV 4401 Contentious decided to do it under the gun Ordnance QF 20 pounder.

Requirements for mass and dimensions associated with the need to transport self-propelled guns by aircraft, in combination with the selected model of the gun identified the main features of the appearance of a combat vehicle. In the cargo compartments of the military transport aircraft that existed at that time, only a tank destroyer could be fitted, made according to a turretless scheme. Requirements for the rate of fire were solved in an obvious way: it was necessary to create an automatic loading of the gun. But the use of such a mechanism required to take certain measures related to the return of the barrel to its original position for loading after each shot. Because of this, the British tank builders decided to install the gun hard, without the possibility of vertical guidance. The horizontal guidance was kept at the level of the previous turretless ACS: with a slight deviation from the machine axis.

The original solution to the problem of the mutual arrangement of the automatic loader and gun gave rise to a new task, namely, vertical guidance without using any lifting mechanisms of the gun itself. It is not known for certain whether the British tank builders knew about the Swedish project Strv-103, but they followed the same path as their Swedish colleagues. Already in the preliminary version of the project, the tank destroyer FV4401 had to raise and lower the barrel of the gun, tilting its entire body back and forth. 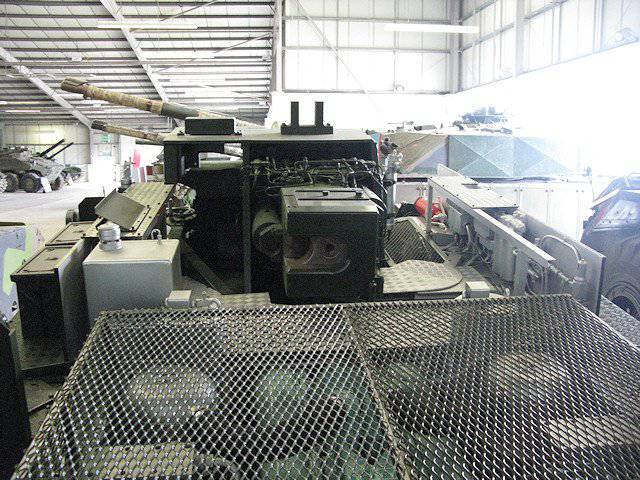 The non-standard way of aiming the gun in the vertical plane necessitated the creation of a new undercarriage, namely a suspension that can not only reduce the shaking of the car when it is moving, but also change the angle of the body. As a basis for the chassis of the Contentious tank destroyer, they chose the appropriate parts of the Comet cruising tank during the Second World War. In the course of reworking under the new requirements, the undercarriage lost two track rollers (one on each side), and the hull became shorter. Due to this, the machine together with the barrel had a length of about 8,5 meter. The case width did not exceed the 3,1 meter. Regarding the engine ACS FV4401 accurate data are not available. According to some sources, when modifying the hull of a Comet tank, the engine and transmission remained the same. Thus, the tank destroyer was equipped with a Rolls-Royce Meteor Mk III petrol engine with an HP 600 power.

To change the "trim" of the hull chassis got the original hydraulic system. Two medium-sized skating rinks from each side kept the old suspension completely borrowed from the Comet tank. Front and rear track rollers, in turn, received a suspension of a new design. These rollers were mounted on new L-shaped balancers, attached to the hull for their middle part. A skating rink was mounted on one of the balancer arms, the other was connected to a hydraulic cylinder. Thus, by changing the pressure in two pairs of cylinders connected to the front and rear support rollers, it was possible to tilt the whole self-propelled gun forward or backward. 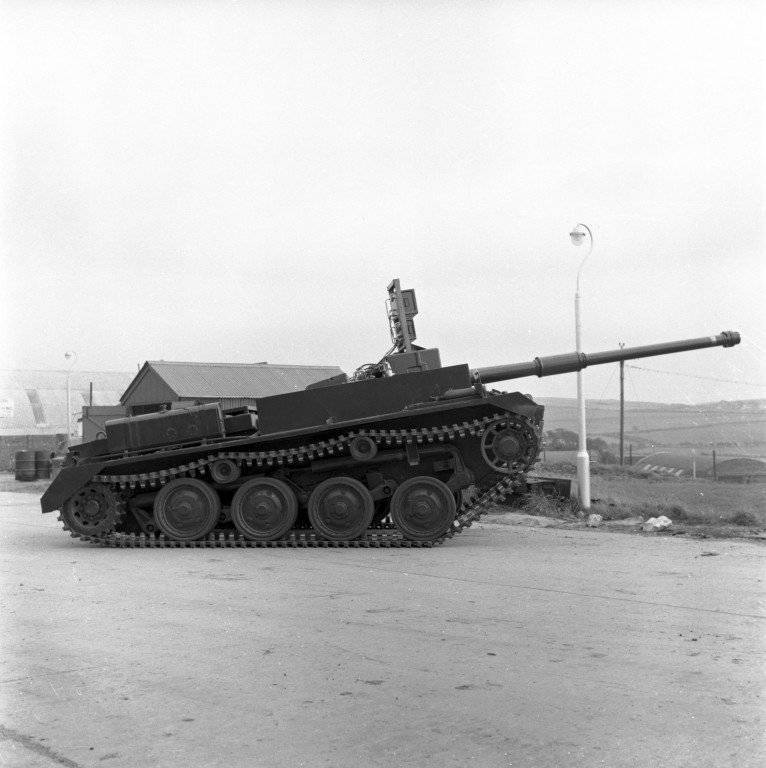 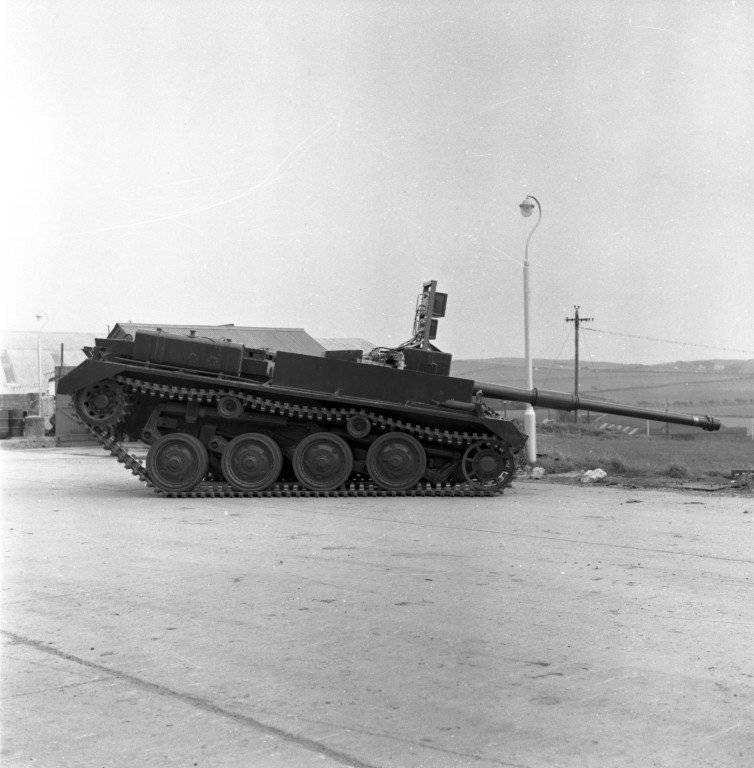 Due to the experimental nature of the project, the first prototype of the FV4401 tank destroyer was assembled from ordinary steel, the armor was not used at this stage. Also, the prototype with the UXM 127 symbol had a simplified layout: fuel tanks of relatively simple design on the fenders, an open wheelhouse with a grid over the engine compartment, etc. Crew jobs of two people (driver and commander-gunner) were placed in front of the hull, on the sides of the breech of the gun.

Taking advantage of this opportunity, British engineers decided to try out other new technologies on the FV4401. Thus, the electronic equipment of the experimental machine included television surveillance systems for the environment. The purpose of another part of the Contentious electronics is unknown. The photos from the tests captured self-propelled with some equipment above the breech of the gun. Two boxes with wires running from them probably contained a part of electronic equipment, but there is no exact data on their purpose. A variety of assumptions are made, from the original method of installing instrumentation to the compact radar of target search and guidance.

Tests of unarmored lightweight prototype FV4401 took place at test sites in Kirkubri and Luluorte. Under the conditions of landfills, the possibilities of the original chassis, capable of adjusting the slope of the hull, were primarily studied. After a little fine-tuning and correcting a number of minor flaws, the prototype tank destroyer is crew positioned with ease. It is noteworthy that at the maximum elevation angle the driving wheels touched, and at the maximum descent angle, the guides. This fact markedly limited the possible value of the vertical guidance angles, but for a machine designed to destroy tanks with direct fire, this was considered acceptable. The gun mount could independently turn a small angle and in a vertical plane, which increased the accuracy of the fire, since turning the whole machine did not provide a sufficiently thin guidance. 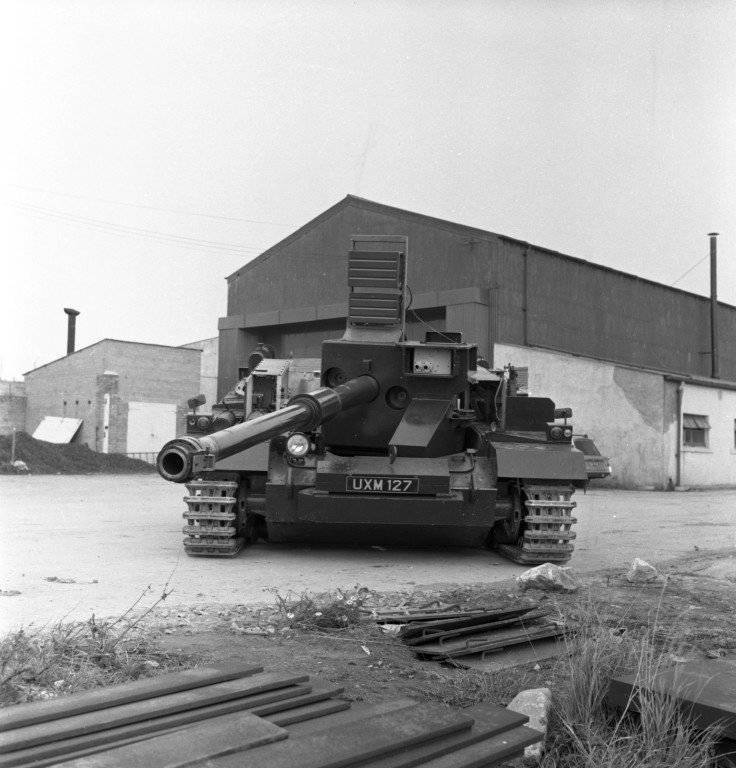 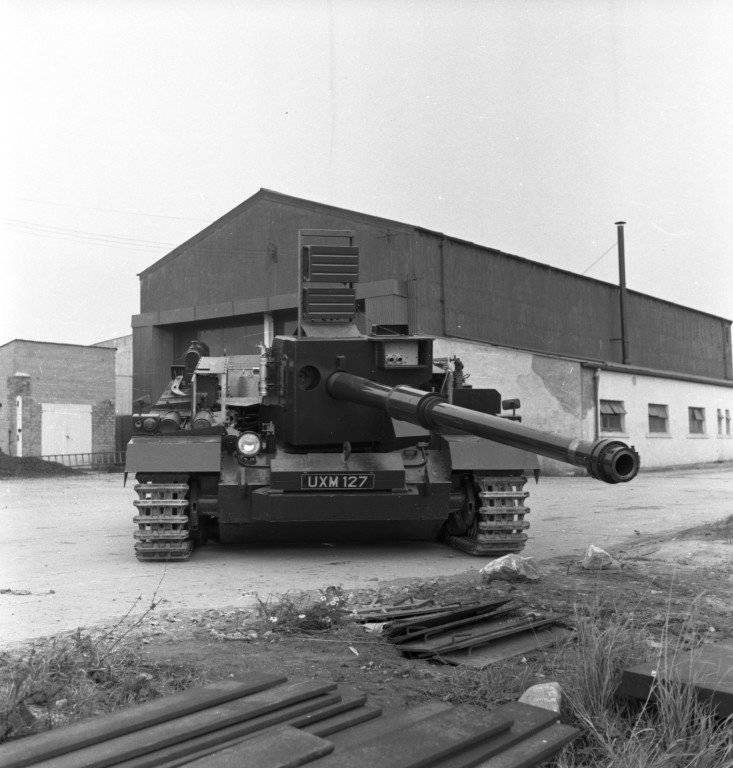 Horizontal guidance was carried out by the rotary module.

During the tests, as far as is known, the firing qualities of the experimental ACS were tested. The FV4401 machine fired with sufficient success at various targets imitating the enemy tanks. During the tests, some problems of automatic loading were identified. The exact values ​​of the rate of fire using the feed mechanism of the projectiles, unfortunately, are unknown, but there is information according to which this parameter was higher than that of tanks with a similar gun and manual loading.

The FV4401 Contentious project clearly demonstrated the possibility of creating a light air transportable self-propelled artillery mount capable of striking a large number of modern and promising tanks. However, in the early sixties, another direction showed its success. The latest anti-tank guided missiles, despite their imperfections, could fully compete with heavy and sophisticated tank destroyers. They were already capable of destroying targets at comparatively large distances with acceptable accuracy, and also allowed them to mount launchers and control systems on any suitable equipment.

The appearance of anti-tank missiles almost led to the closure of the FV4401 project. Rather, work on the initial version of it after the tests stopped, but after a while an attempt was made to increase the firepower of this tank destroyer with a L7 rifled 105 millimeter caliber gun. According to reports, the Contentious prototype ACS dismantled the old QF 20 pounder gun and installed a new one, thanks to which the firepower of the combat vehicle grew accordingly. However, in this form, the FV4401 project had no particular prospects. 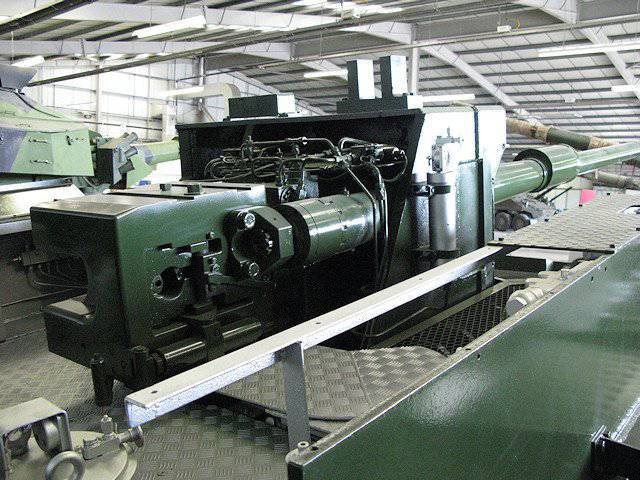 During the FV4401 project, at least one prototype was built, armed with a 84-mm cannon and later receiving a new weapon. Some sources claim that up to three experimental machines were used in the tests, but there is no serious evidence of this. Be that as it may, only one copy has survived so far - the same machine with the “UMX 127” sign captured in most photographs of the sixties. Now this self-propelled gun is stored in one of the pavilions of the Bovington Tank Museum. The location of the other prototypes — if they really existed — is unknown. Probably, during the project, only one copy of the “controversial” tank destroyer was assembled.