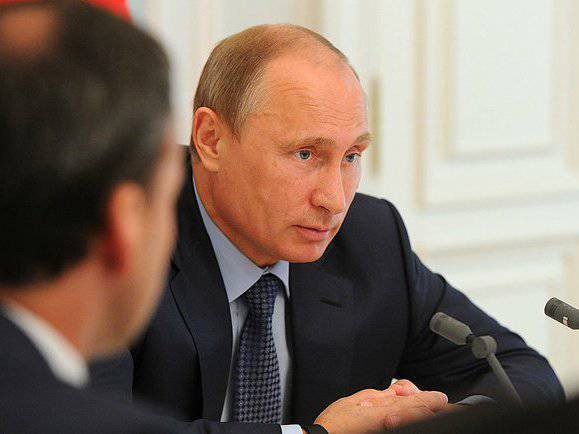 Vladimir Putin demanded to streamline the schedule for the transfer of the newest ships to the Navy, and also to speed up the preparation of the coastal infrastructure for their full service. Experts believe that blamed for the disruption of the schedule of the defense industry, as well as former Defense Minister Anatoly Serdyukov.
Speaking at a meeting in Novo-Ogaryovo on problems of the Navy on Monday, President Vladimir Putin named the reasons for the constant disruption in the delivery of new ships and weapons to the fleet. Recall, on the eve of Putin examined the base of the Black Sea fleet Russia in Sevastopol.

“The reasons are different. But the main ones are inefficiency of interaction between the state customer and the defense industrial complex organizations, disruptions in the supply of components by related companies, the lack of proper cooperation between production and design organizations, as well as the low quality of the supplied equipment, ”Putin quotes RIA“News».

According to the VIEW newspaper, the president cited the example that during the construction of a serial ship of one of the projects 132 had a case of equipment failure, and “it is no good”, and he expects “from industry representatives, interested ministries and departments concrete proposals the situation. " After the meeting, Deputy Prime Minister Dmitry Rogozin said that the president had given only six months to solve problems between the military and industry.

The principles of the formation of the state defense order will be revised, the future - for single contracts that unite and weapon, and electronics, and power units, also reported Rogozin.

“Of particular concern are the old methods in the construction of ships, when some contracts extended to the construction of ships, and others - to the weapons for them. Now it will all be revised. Unified contracts will be prepared, which will place a special responsibility on the lead contractor for everything to be ready on time — weapons, electronics, and power units, ”Rogozin said.

The chief editor of the magazine “National Defense”, Igor Korotchenko, called the semi-annual term “very tough”. “Contradictions have accumulated over the years. But if there is political will and appropriate control, the period can be real, ”the expert noted.

According to Korotchenko, the defense industry is primarily to blame for the delays. “650 contractors who are involved in the supply of components in one way or another are working on a Borey-class submarine. Disruption by someone of the timing entails a breakdown throughout the chain and leads to a delay in the transfer of combat units to the fleet. Therefore, the main problem is the irregularity of the industry, ”Korotchenko told the VIEW newspaper.

The expert noted that after the creation of the United Shipbuilding Corporation, a lot was done to “the deadlines were planned”, but “the previous 20 years, when funding went bad, affected”. He also pointed out the reason for the “butting” between the military-industrial complex and admirals at a time when the Defense Ministry was headed by Anatoly Serdyukov.

“The current minister, Sergei Shoigu, is extremely constructive in his interaction with industry,” said Korotchenko, noting that Shoygu appointed Yuri Borisov, who previously headed the Military Industrial Commission, “who is in the subject and has connections in industry” as his deputy for armaments.

However, optimistic notes were also heard at the president’s meeting. Putin said that already over 85% of the state defense order for the year was placed and contracted. “In general, this is not bad. Contracts are concluded, ”he said.

Recall that in 2010 – 11, contracting was accompanied by scandals. The Ministry of Defense quarreled with the defense industry, as in some cases the prices seemed to the agency too high. The most controversial contracts (in particular, nuclear submarines with the United Shipbuilding Corporation) were signed in November 2011 in the presence of Putin, who was then Prime Minister. Problems in terms of execution of the state defense order were observed at the beginning of last year.

Horizon will overtake the ships

United Shipbuilding Corporation (USC) is finalizing work on its development strategy, which will be designed for the next 30 years, Rogozin also said.

“It is necessary to expand the planning horizon of the entire shipbuilding industry. Now such plans are designed for 10 years. The approach will change dramatically. The new strategy will be designed for 30 years ahead, ”said Rogozin. According to him, "by the end of September, the USC will complete work on its strategy."

As Rogozin explained, an increase in the “planning horizon” up to 30 years, that is, around the life of a warship, “will also allow money to save money for the country, for social and economic programs, to be more prudent for the defense budget, and on the other hand, to create a fleet which will not allow any adversary to even think about possible aggression against our country, using maritime borders. ”

Rogozin noted that a very important dialogue between industry and the military was held at the meeting.

Admirals in the role of "random buyers"

According to him, before the Admiralty, in general, the Ministry of Defense acted as such a casual buyer, and the industry was less focused on providing high quality, and tried only to “get rid of the order” as quickly as possible. “Now the situation has changed dramatically. The dialogue has been restored between the customer and the industry, ”said Rogozin.

He noted that the new development strategy of USC should include many important issues: indicators of increased productivity, specialization of shipyards and shipyards, the unification of the design potential.

Rogozin did not rule out further expansion of the corporation due to the inclusion in its structure of enterprises that are extremely important for shipbuilding. In particular, the developers of speaker systems, underwater weapons.

Agree on the shore

At the meeting, the president also demanded that the Alexander Nevsky, Vladimir Monomakh and the nuclear-powered submarine Severodvinsk be handed over this year.

“All this is a new generation of equipment, and in order for it to function effectively, it is necessary to develop and modernize the relevant coastal infrastructure,” he continued. Putin asked to report on how the work is going. “Where at least there are capital construction plans, something is not yet visible,” the president added.

The former submariner, captain of rank III reserve Andrei Mikhailov, who lives in Severodvinsk, assumes that shipbuilders will meet this deadline. He recalled that "Severodvinsk" is almost ready to surrender, "and now the last stages of sea trials are underway." "Alexander Nevsky" was launched in 2011 year and passed the full range of running and mooring tests. Mooring tests relate to inspection of equipment at the pier, and running - at sea. “This boat could have been commissioned last year. It all depended on the Bulava rocket. But she, too, was put into service, so there is no doubt, ”Mikhailov told VIEW newspaper, expressing confidence that“ Vladimir Monomakh ”would also be delivered before the end of the year.

According to him, the boats were ready last year, “but they didn’t force their fleet to receive them, as in Soviet times, when in one year six boats were handed over, and the Bulava rocket crews were waiting.

Korotchenko also explained why Putin demanded to speed up work on the coast in order to create a basing infrastructure corresponding to new missile carriers. “We should not get into the situation in which the Soviet fleet was located. Then the boats and ships were forced to stand at the pier in the sea and develop their resources. Therefore, all life support systems - water supply and heat from the shore - must be made. Otherwise, it will be criminal to transfer to the army and navy new equipment, ”Korotchenko believes.

Ctrl Enter
Noticed oshЫbku Highlight text and press. Ctrl + Enter
We are
List of destroyed the largest and most high-tech enterprisesAnatoly Serdyukov - "not a man, this is a function"
Military Reviewin Yandex News
Military Reviewin Google News
69 comments
Information
Dear reader, to leave comments on the publication, you must to register.