Ayatollah Khamenei: "Americans are not credible"

July 30 2013
30
Over the past few days, several events have occurred that give additional touches to the picture of relations between the United States and Iran. Firstly, the leaders of all world states except the USA and Israel were invited to the solemn ceremony of assuming the office of the new President Rouhani, scheduled for 3 August. Secondly, one non-governmental organization from Iran invited Edward Snowden, a public informer, to visit her - so that he would share information about how the US is spying on Iranian citizens. Thirdly, from an indirect source - the prime minister of Iraq - information was received that Tehran is interested in direct negotiations with Washington. Fourth, the United States has relaxed sanctions against Iran on the list of medicines. 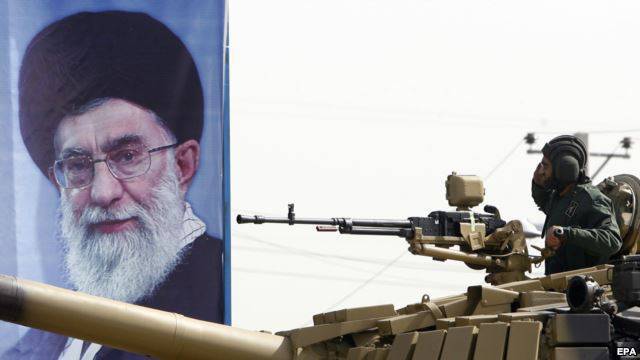 The Iranian authorities have not invited the leaders of the United States and Israel to the inauguration of the president, reports RIA News" with reference to the Associated Press. A week ago, a representative of the Iranian Foreign Ministry, Abbas Aragchi, said at a press conference that leaders of all other world states, including the UK, were invited to the inauguration ceremony of Hassan Rouhani scheduled for 3 in August.

Two days later, it became known that Snowden, who lives at Sheremetyevo Airport, received a letter from an Iranian non-governmental organization, which invited him to cooperate, reports "NTV" with reference to Interfax.

The NGO is called Justice Seekers Without Borders. Her employees wrote to E. Snowden: "Since the illegal activities of the United States that you publicized include spying activities against Iranian citizens, we invite you to our country to hear the details of such actions."

The letter notes: "The Iranian people will always be on the side of those who are fighting for the truth and are ready to make sacrifices for this."

Two days later, reports appeared in the media about Tehran’s interest in direct negotiations with the United States.

As the 9tv.co.il With reference to The New York Times, Iraqi Prime Minister Nouri al-Maliki told the US authorities that Tehran is interested in holding direct talks with Washington. The theme is a national nuclear program. Al-Maliki said this at a meeting with the US ambassador in Baghdad, making it clear that he was in contact with the agents of Ayatollah Ali Khamenei. Name he did not name.

As for the United States, it must be added here that they, after the presidential elections in Iran, are counting on Tehran’s some kind of nuclear flexibility.

Rouhani’s 64-year-old after the victory said: “This is a great epic event (the election of the head of state) opens up new opportunities for us, and countries that advocate democracy and open dialogue should respect the Iranian people and recognize the rights of the Islamic Republic ". "This is a victory of intelligence, restraint and progress over extremism," - further quotes his words Interfax.

Congratulations on the victory were pretty friendly. The world powers seem to have forgotten about their differences. The United States expressed willingness to negotiate with the Iranian authorities on a nuclear program. EU High Representative for Foreign Affairs and Security Policy Catherine Ashton wished Rouhani success in forming the government and promised to cooperate with the new Iranian leadership in order to quickly resolve the Iranian nuclear issue diplomatically. And there, UN Secretary General Ban Ki-moon congratulated Rouhani on his victory.

Channel "Euronews" reported on the expectation of Tehranis transformations. Rouhani for Iranians is a symbol of change, observers say. “Long live reforms!” The residents of Tehran chanted. Rouhani guaranteed freedom to the people, promised to “return ethics to politics”, raise the economy from his knees and improve relations with the rest of the world.

And how can you lift her, if you stifle her sanctions?

Therefore, information on direct negotiations - moreover, on behalf of the Ayatollah, and not the President - most likely has ground.

It is possible that precisely in order to push the ayatollah to negotiations, Washington has slightly loosened the grip of sanctions.

"AN-online" informs that the United States Department of the Treasury has expanded the list of medicines and equipment that can be exported to Iran.

The statement by the agency notes that the list of drugs and equipment that can now be exported or re-exported to the IRI without the permission of the US Treasury has been increased in accordance with the license issued in October 2012. The ministry noted that "the United States is making efforts to meet the humanitarian needs" of the Islamic Republic.

However, the Ayatollah is not enticed by such a carrot.

According to Vladimir Sazhin ("Voice of Russia"), during Iftar - evening break ceremony after daily fasting during Ramadan, which was attended by Mahmoud Ahmadinejad and Hassan Rouhani, - Iranian supreme leader Ayatollah Khamenei said: "I said earlier this year that I was not optimistic about the negotiations with the US , although in recent years I have not prohibited dialogue on specific issues, such as, for example, on Iraq. ”

Without denying the possibility of a dialogue with the United States, the Ayatollah warns: “Americans are not credible. They are not honest in their statements. The position of American officials in recent months has once again confirmed that there is no reason for optimism. ”

It is difficult to expect, the correspondent notes that the supreme leader will suddenly change his negative attitude towards the “big devil.” The confrontation remains. But the socio-economic realities in Iran require new approaches to internal and external problems, including nuclear projects. Therefore, it is possible, Vladimir Sazhin notes that in the near future we will witness the official Iranian-American dialogue.

A few months ago, the analyst points out, the likelihood of such a dialogue was extremely low. Ahmadinejad was not a suitable negotiating figure for Americans. But after Rouhani won the election, the situation changed. Vladimir Sazhin quotes Rouhani himself: “We will take two steps to end the sanctions. First, we are going to double the transparency of our nuclear program. Secondly, we intend to build trust between Iran and the international community. ”

As a result, we can summarize that by easing the sanctions, Washington made it clear to Tehran that it gives the green light to the negotiations and is now waiting for the corresponding initiative from the Ayatollah, who will be able to properly address the new president.