Are we Malorossians or Ukrainians? 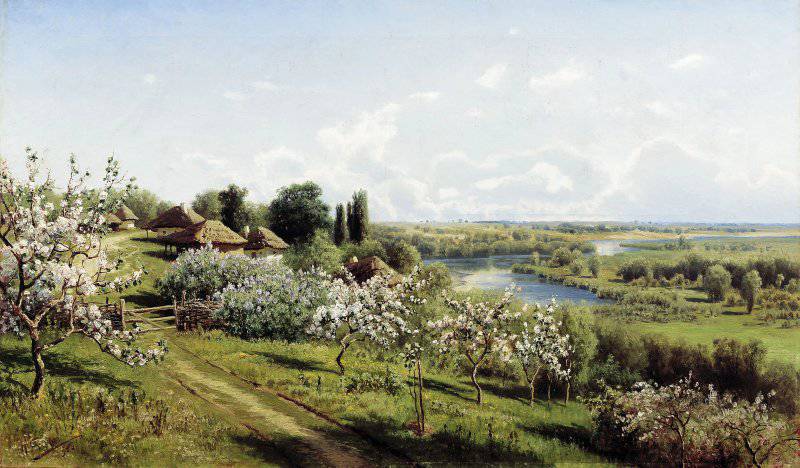 He wrote under the pseudonym Boris Bashilov (1908 – 1970) - a Russian émigré political essayist. The text first appeared in the Russian Brazilian magazine Vladimirsky Leaf in 1952.


In front of me on the desk is my family coat of arms. After escaping from the USSR and many years of wandering around the world, I accidentally found his image in Buenos Aires with a Russian engineer engaged in heraldry. Above the knight's helmet - magnificent ostrich feathers, on a blue shield - a crescent below, on the right and left - golden stars, a feathered arrow flies into the upper crescent.

If you unfold the “Little Russian coat of arms” of Modzalevsky on the corresponding page, then you will find out that this coat of arms belongs to the descendants of Ivan Yurkevich. The genus of Ivan Yurkevich is one of the oldest clans of Little Russia. The members of our clan are famous not only for their feats of arms in the struggle against the Turks and the Crimean Tatars. Even more, our clan is famous for its successes on the basis of Russian enlightenment. One of the pioneers of the family was the closest assistant to the Kiev Metropolitan Peter Graves, the first professor of philosophy of the Kiev Academy. But almost all the enlightenment of Minor and Great Russia has its origins in the Kiev Academy. My ancestor was one of those people whose works built the general Russian culture. And so it has been in our family always for centuries. Some participated in the construction of Russian culture, others defended all-Russian culture from the Turkish sultans, the Crimean khans and the Polish kings. So it was before Bohdan Khmelnytsky; it was so on the Pereyaslavskaya Rada, when one of the Yurkeviches, swinging the curve of a Cossack saber, shouted along with the others: “Volim under the Tsar of the Moscow Orthodox! Volim! ”

From the time of Petro Mohyla, to this day, our clan has been an active participant in the construction of the Russian national state! Love for Little Russia, for its historical past has always been combined with love for the Russian state. There were military men in our family, there were philosophers, there were modest imperceptible workers, but there were never supporters of the separation of Little Russia from Russia.

Professor of the Moscow University P. Yurkevich was one of the fierce fighters against materialistic philosophy. No wonder Lenin in his books with such rage attacked him. My father, the director of a teacher's seminary, went with Kolchak to Siberia and died in Chita. My cousins, naval officers, all took an active part against the Bolsheviks. Neither Petliura nor Skoropadsky seduced them, they felt like Russians and fought not against the Russians, but against the Bolsheviks. One of the cousins ​​raised on bayonets in a battle near Kiev, the others emigrated from the Crimea with Wrangel. When I was abroad, I found many more relatives abroad than I had in Russia.

“... You all have little Russians to inform you about this ...” “Who of you loves the integrity of the homeland of your Ukraine, the Little Russia ...” In the letter of the Zaporizhzhya Sich to Bogdan Khmelnitsky, written by 3 on January 1654, we find the following lines: “And the idea Vashj dob manage and Buda and vsem narodam malorossiyskim on both storonam Dnieper buduchim, under the patronage and Velikoderzhavneyshago Presvetleyshago Russian monarch, zaslushny be priznaem and give our a military parade vam and bysto that matter are not allowed, and signified it finished, yak best polze homeland Mal Russian. " The term Little Russia, Little Russia originated in 1335, when everything was "Muscovite", the Moscow Principality, like the others, was under the Tatar yoke. Little Russia, Little Russia called the principality of Galician and Volyn prince Yuri the Second. And Yuri the Second called himself "the prince of all Little Russia." "Muscovites" to create the name "Little Russia" have nothing to do. Recently, this term has been the domain of only poetry and royal title. And everyone — and the inhabitants of Little Russia, like Big Russia — equally considered themselves Russians.

Nothing, of course, offensive in the name of "Little Russia" or "Little Russia" no. In one of the issues of the Vladimirsky Leaf, published in Brazil, we find the following information about the origin of the name “Little Russia”: “The countries where the people came from — their national cradle — were called small in history. The great ones are the center of territorial completion of state consolidation or colonies, which have reached a particularly magnificent flourishing, wealth and power. Hence, Small Greece (Athens) and Great Greece (Hellas), Great Italy (after Rome), Small Poland (Krakow) and Great Poland (Warsaw), Small Russia (Kiev) and Great Russia (Moscow). ” As we can see, the author of that certificate writes, Semyon Vityazevsky, the name “Little Russia” or “Little Russia” does not contain anything offensive or disgraceful for the inhabitants of southern Russia. Little Russia is the cradle of the Russian people; it is not for nothing that Kiev is “the mother of Russian cities”, from here “the Russian Land went to be”. The name “Little Russian”, if it is possible to speak about preference at all, is more honorable than “Great Russian”, because it means literally: Little Russia is the first Russian, the most ancient in its genealogical root, in its direct line.

The name of our people Russian is known from the deepest antiquity ... "We are the only Russian people!" Little Russia is a tribal concept. Ukraine stands for nothing but the outskirts, the marginal lands of the state. Anyone who is even slightly familiar with the history of the Russian state, with documents written at a time when they had never heard of our separatists, when no one had heard of any “Ukrainian people”, he often knows that in these old state papers The following expressions are used: Ryazan Ukraine, Voronezh Ukraine, Kursk Ukraine, Siberian Ukraine. In the old song of Siberian explorers, folded at the time when Yerofei Khabarov conquered Amur, it is sung: “As in the Siberian in Ukraine Yes in the Daur side ...” From the song, as you know, especially from the old one, you cannot throw out the words. How, interestingly, modern separatists will explain these words? Indeed, at that time no Ukrainians lived in Dauria. And Siberian Ukraine simply meant marginal Siberian land. Little Russia, of course, can be called Ukraine, and Little Ukrainians Ukrainians. And Kiev, in case of success, the separatists can rename, of course, Skoropadsk, Petlyurovsk or Benderovsk. But from this Kiev will not cease to be Kiev, the mother of Russian cities. Little Russia - is the ancient original name of a certain part of Russia. And there is no point in denying us, Little Russians, the historical name of our Homeland. Separatists can call themselves whatever you like. These people, although they are called “professors-professors” and “master-masters”, do not give themselves an account of what the word Ukraine actually means and that Little Russia.

Yes, I am a little Russian. I am the first Russian, the most ancient Russian. Maybe my ancestor during Igor nailed his shield on the gates of Constantinople. Why should I change the true name of my ancestors to something new, which the founders of separatism invented? Why should I consider Muscovites to be enemies, the Moscow culture hostile, when all of Moscow’s culture emerged as a thin stream from the ancient Kiev Academy and when one of the Yurkeviches was the first Russian and Russian philosopher.

Not for that, my ancestors folded their heads in battles with the Turks, Tatars and Poles, died on convict galleys in Turkey, in the dungeons of Polish castles, not for that they fought near Poltava on Peter’s side, and later fought on the Borodino field so that descendants In the hard times for them, they abandoned the entire national heritage of their ancestors. In the name of what to do it? In the name of having the opportunity to become an assistant to the pan-minister in fake Ukraine, a toy of political forces hostile to Russia? Long live Little Russia - the ancient ancestral home of great Russia, which is now bleeding in the arms of international Bolshevism! I lived under the rule of the Bolsheviks for twenty-four years and did not see the national hostility of the Little Russians to the “Muscovites”. And when the great war breaks out against the Bolsheviks, all the faithful sons of Russia will gather under the banners of the Russian Liberation Army: Great Russians, Little Russians, Belorussians, Georgians, Tatars, Armenians - all who want to be the son of a free great country, and not a small separatist stable. And our first bullet and the first blow with a saber will be on the heads of the Bolsheviks, and the second bullet, the second blow with a saber will be on agents of foreign intelligence who dream of becoming ministers of states not dependent on Muscovites but dependent on foreigners. We, Little Russians, do not want to be a toy at all in the hands of “master lords” and “professors professors” alien to us in the maintenance of foreign intelligence services.