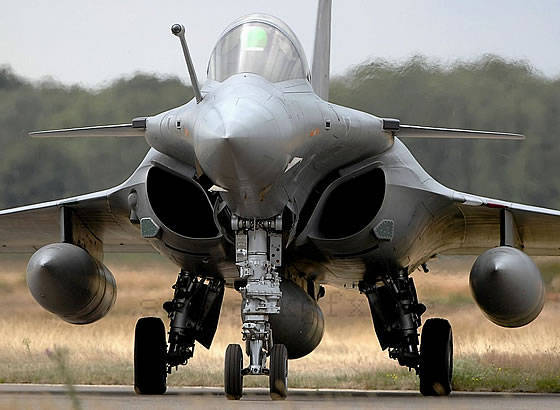 The Ministers of Defense of France and India, Jean-Yves le Drian and A.C. Anthony 26, at the talks in New Delhi in July discussed the situation with the protracted signing of the contract for the supply of 126 fighter jets "Rafale" to Dassault.


According to experts, the negotiations held will not lead to an acceleration of the contract signing procedure.

According to Janes Defense Weekly, citing industry sources, during a meeting with Indian Defense Minister A. Anthony, French Defense Minister Jean-Yves le Drian expressed "understanding" of the complex and complex nature of negotiations on such a large contract, but stressed the need to accelerate the signing of the agreement.

During the negotiations, the Indian side focused on reducing the rupee exchange rate, the difficulty of agreeing on the transfer of 108 fighter jets in India and the implementation of an offset program in the amount of 50% of the total contract value.

The acquisition of additional fighters "Rafale" (optional) also remains in a "suspended" state.

Recently, A. Antony instructed to reassess the cost of the full Rafale cycle after receiving a request from former Foreign Minister Yashwant Sinha, who insists that inaccuracies have occurred in previous calculations. In his letter, J. Sinh also claims that the Indian Defense Ministry violated two of the seven prescribed acquisition procedures when selecting Rafale fighters in January 2012 for the winning bidder.

According to official sources, the revaluation will take considerable time, since several members of the commission that carried out the initial assessment have already left their posts, and the new team of Air Force and Defense specialists will need time to “penetrate into complex calculations”.

According to analysts, the calculations for the new revaluation will appear no sooner than a few months. Since the general elections in India are scheduled to take place in May 2014, the “lack of time” reduces the ability of the government in power to sign a large contract, the cost of which, according to the opposition, will double and amount to 18-20 billion dollars.

The delay in signing the final contract is also affected by the uncertainty in calculating the cost of Rafale, which will be produced by HAL under license.

In the course of the talks, the ministers also discussed the agreement on the establishment of a joint venture between MBDA and Bharat Dainemics Limited to develop the Short-Range Surfaceto-Air Missile SR-SAM short-range anti-aircraft missile system worth 300 billion rupees (5,08 billion dollars) . The firing range of the complex will be 10 thousand. MBDA and Bharat Dynamics and Limited agreed on an agreement in February 2013, but are still awaiting approval by the Government Safety Committee.

The joint statement also indicated that India and France agreed to expand cooperation in high-tech areas, including joint R & D. The ministers agreed to establish a bilateral commission on defense cooperation, the first meeting of which is to be held in France in October of this year.

On the eve of the visit of the Minister of Defense of France in New Delhi, the Defense Procurement Council of India approved a list of procurement for three types of aircraft, whose value is estimated at 50 billion rupees. It includes, inter alia, MBDA 4500 anti-tank guided missiles Milan-2T, which will be manufactured under license from Bharat Dainemix Limited.

Another 10 billion rupees is allocated for the modernization of the Mi-17 helicopters to ensure the ability to perform night flights, as well as the installation of the autopilot on the Jaguar attack aircraft.

Ctrl Enter
Noticed oshЫbku Highlight text and press. Ctrl + Enter
We are
The action “Military service under the contract is your choice!” In Rostov-on-Don: future contract servicemen, exhibitions and “Russian Knights”"Dassault Aviation" handed over to the French Ministry of Defense the first fighter "Rafale" with the RBE2 radar
19 comments
Information
Dear reader, to leave comments on the publication, you must to register.