July 29 2013
43
The Russian Ural Mining and Metallurgical Company (UMMC) has decided to become the sole owner of the production of a small Let L-410 aircraft of local air lines (MVL), also known as "Turbolet". To this end, UMMC is going to increase its own share in the block of shares of the Czech company Aircraft Industries from 51% to 100%, ITAR-TASS agency reports. The L-410 aircraft is considered by the Russian side as the main model for modernizing regional aviation parks and restoration of the local airline network. The new aircraft are expected to be leased with budget support. The specific mechanisms of this support of the heads of the Russian regions are going to be determined at a meeting in September 2013.


Currently, the main product of the Czech airline is the aircraft L-410UVP. This model is a short-haul aircraft with a shortened take-off and landing distance for 19 passengers. The first modification of the Let L-410 aircraft rose to the sky as early as 1969. In the postwar years, the Czech "Turbolet" became the first foreign aircraft that went on Soviet airlines. On the basis of this machine was created a large number of various modifications of the transport, military and special purposes. In particular, this aircraft is widely used in the Russian military and civilian flight schools, where it serves to train future pilots of military transport and long-range aviation.

After the transfer of 51% of the shares of the Czech company into the hands of UMMC, the Czech aircraft manufacturer received additional orders for its main products - L-410 UVP-E20. In the 2009 year, after a rather long interruption, deliveries of aircraft to Russian customers were resumed - first to civilian companies, and later - to the Russian Ministry of Defense. As of 2012, the X-NUMX of the L-7 UVP-E410 aircraft was in service with the Russian Air Force, and the contracts and options provided for bringing the fleet of aircraft data to 20 machines. 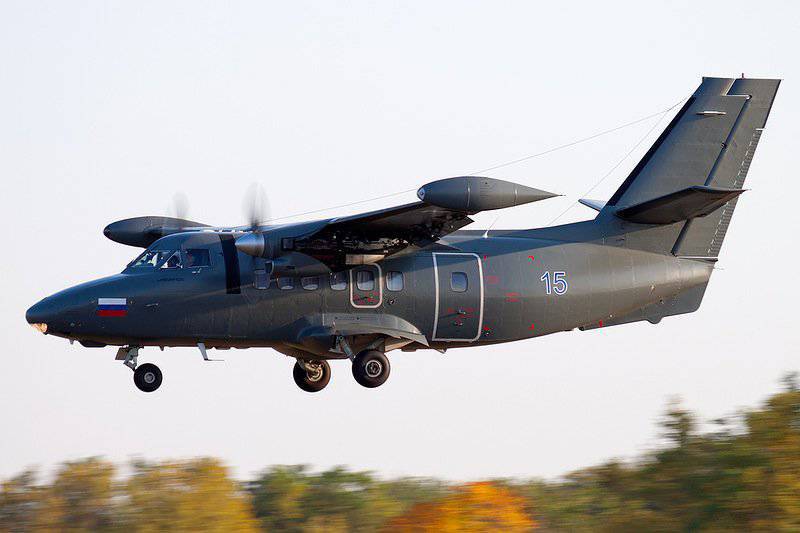 Nowadays, Aircraft Industries supplies the regions of Russia with an upgraded version of the aircraft, which is equipped with H-80 turboprop engines, which are manufactured by the General Electric division in the Czech Republic. According to the UMMC, the installation of these engines has significantly improved the performance of the aircraft, increasing, in particular, the range from 1420 to 1520 kilometers. Currently, the L-410 aircraft is listed in the parks of the Russian companies KrasAero and Orenburg. Buy a few aircraft ready Buryat airline PANH and the government of the Khabarovsk Territory. Earlier, the Ministry of Transport and the Ministry of Industry and Trade of Russia stated that 9- and 19-local aircraft are necessary for the development of the domestic air transportation market, but no such modifications are made in Russia.

Let L-410 "Turbolet" - Czechoslovakia, subsequently the Czech twin-engine universal aircraft, designed for operation on local airlines (IAL). It is a twin-engine turboprop high-wing aircraft with a single-fin tail. Known also under the names: Years, Years L-410, L-410, Turbolet, Elk, Cheburashka. According to 2012, more than 400 aircraft of this type have been operated in the world every year.

The most common version of the aircraft was the modification of the L-XNUMHUVP, in this version, the aircraft was reduced take-off and landing distance. The abbreviation UVP means “shortened takeoff-landing”. The aircraft of this modification first rose to the sky in the year 410. Initially, the machine was equipped with the usual complex of aviation equipment of the Soviet-Czechoslovak production. From its predecessors, the model differed in the increased size of the wing and vertical tail, elongated fuselage, the use of interceptors and more efficient engines. 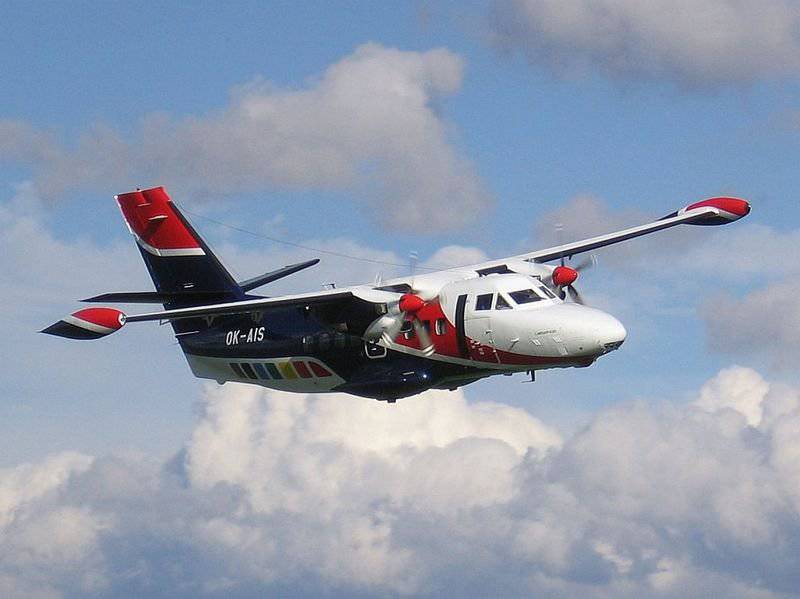 It is worth noting that the design and production of small airplanes and air taxi in the bloc countries of the Council for Mutual Economic Assistance (CMEA) was the prerogative of the Czechoslovak aviation industry. Czech-made airplanes flew not only in the socialist countries, but also in Switzerland, Italy, Great Britain, the USA, Australia and other countries of the world. Aero-45, Super Aero-45S and Aero-145 four-seater aero-taxis, as well as L-200 Morava, were in particular demand. Therefore, it is not surprising that when the question arose of choosing a small short-haul aircraft for mass production, the choice fell on the Czech L-410, which most fully corresponded to the majority of the parameters announced in the technical specifications of the State Research Institute of Civil Aviation.

The small passenger plane L-410 “Turbolet” was designed by the designers of the company “Let” in 1966-1967, the project was headed by Ladislav Smrchek. It was assumed that this aircraft can be used in a fairly wide range of temperatures from + 50 to -40 degrees Celsius. Czech specialists were guided by the Soviet technical assignment and in advance took into account the difficulties of the climatic conditions of operating the aircraft in the USSR, which was to become the main customer of the aircraft.

By the end of 1978, 100 L-410M / MU aircraft were purchased in the USSR for the Ministry of Civil Aviation. In the Soviet Union, "Turbolets" replaced the famous "corncrackers" Antonov, who transported unpretentious Soviet passengers in the air holes of local airlines. It should be noted that the pilots who were “transplanted” from the An-2 to the L-410 perceived the newcomer in two ways. On the one hand, the Czech aircraft had a lot of advantages. Firstly, he had 2 engines, he won 2 times in safety. There was a set of modern navigation and radio equipment on the plane, a high level of comfort was provided for passengers ... But, on the other hand, for pilots of civilian air fleet An-2 has always remained a free “gas provider” of their personal “Lada” and “Volga”, while the Czech plane flew kerosene. And in operation, the An-2 was a more unpretentious machine. More precisely, the flight technical personnel related to the operation of the Soviet An-2 is much simpler. In general, it was considered very prestigious to transfer from An-2 to the Czech L-410. 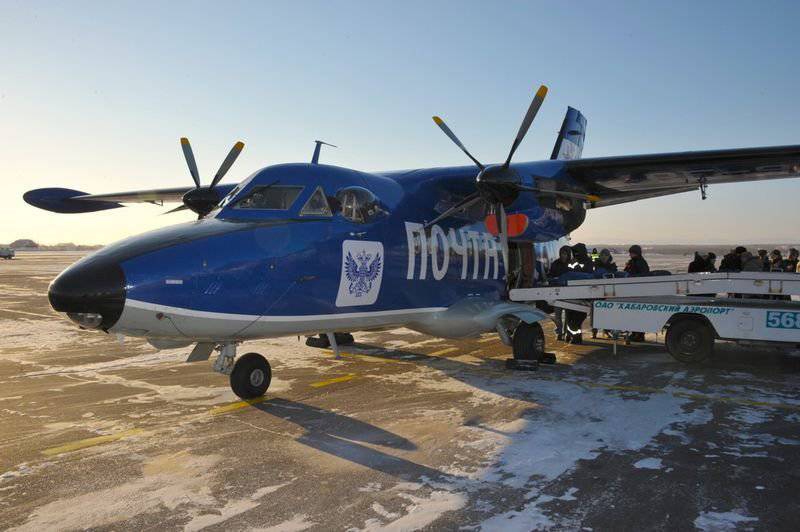 In total, starting from the 1969 year, 1104 L-410 of various models were produced in Czechoslovakia and the Czech Republic, of which the 862 aircraft fell into the USSR. Interestingly, the 1000 “Turbolet” was released back in the 1990 year and transferred to Aeroflot, after which their production volumes decreased significantly. With the collapse of the CMEA, and in consequence of the Soviet Union, the demand for these aircraft has decreased dramatically. Despite this, Turbolst is still being exploited in more than 45 states around the world.

Currently, the Czech Republic is producing the L-410 UVP-E20 aircraft version, which can be equipped with analog or digital avionics (at the customer's choice), the TCAS airborne collision warning system and the autopilot. Aircraft L-410 UVP-E20 received the certificate of AR IAC.

Ctrl Enter
Noticed oshЫbku Highlight text and press. Ctrl + Enter
We are
DHC-6 airplanes are going to be purchased in Primorye for the development of local airlinesAn-12 in Afghanistan
Military Reviewin Yandex News
Military Reviewin Google News
43 comments
Information
Dear reader, to leave comments on the publication, you must to register.