July 29 2013
65
Tu-134 jet aircraft is rightfully recognized as one of the most successful projects in the field of domestic passenger aircraft construction. AT history domestic civil aviation This aircraft entered as the most massive and popular Soviet airliner. Tu-134 (according to the NATO codification Crusty— “Hard”) is a Soviet short-haul passenger aircraft, which was created in the early 1960s at OKB im. Tupolev. The aircraft was mass-produced from 1965 to 1984 in Kharkov at the production association of the same name, while the latest copies of the aircraft were assembled in 1989. The liner made its first flight on July 29, 1963 - that is, exactly half a century ago.


The Tu-134 is rightfully considered one of the most popular Soviet passenger aircraft, in total 852 cars of all modifications were produced. In addition to the USSR, this aircraft was operated by a large number of countries of the Social Camp. Deliveries of aircraft for export began in the year 1968. Tu-134 became the first Soviet airliner, which has passed the official international certification. In November, 1968, this machine was certified in Poland for compliance with the British airworthiness standards BCAR. This aircraft was actively exploited by other socialist countries - Bulgaria, the GDR, Czechoslovakia, Yugoslavia, Hungary, Vietnam and many others.

On the basis of the Tu-134 various flying laboratories were created, which were intended to test new types of space and aviation equipment. As of February, 2012 was operated around the world by 130 aircraft of this type, of which more than 100 are in Russia. VIP-versions of this aircraft are very popular, but military modifications are also widespread. At one time, on the basis of the Tu-134, training aircraft were created for the training of pilots and navigators of the strategic bombers Tu-160 and Tu-22М3. Often these machines were used to maintain the skills of combatant pilots in order to save the resource of much more expensive bombers. 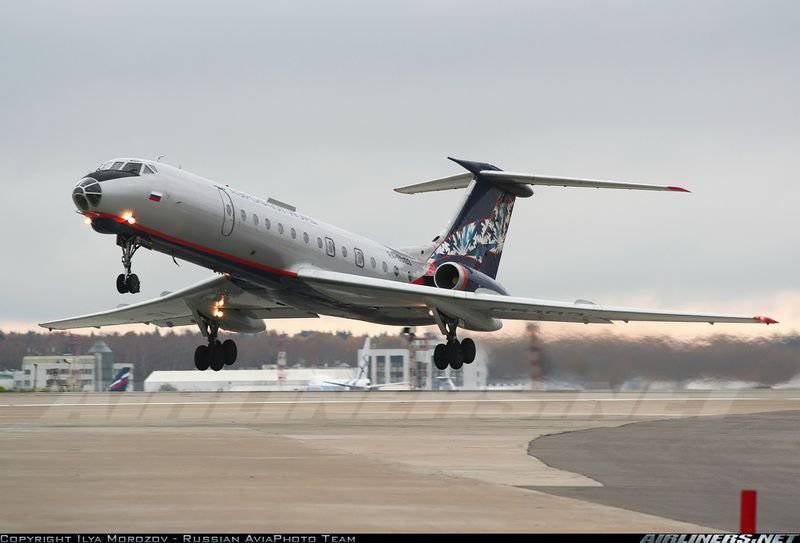 Currently, information has appeared that the country's Air Force Commander-in-Chief decided to restore the entire existing fleet of training aircraft Tu-134UBL and Tu-134Ш and addressed directly to the country's defense minister with a request for the necessary amount of money. According to preliminary estimates, it will take about 50 million rubles to extend the life of virtually 20 aircraft. The modification of the Tu-134UBL is used for the training of military pilots, and the Tu-134Ш for the training of long-range aviation navigators.

Today, except for the Tu-134, there is practically nothing to prepare them, since the backup options in the form of An-26 and An-24 do not have the aiming and navigation equipment with which long-range bombers are equipped. It was also built a number of machines intended for transport and passenger traffic commanders of the armed forces, the so-called "staff", including those equipped with special communication (ASA).

It is believed that the Tu-134 aircraft owes its appearance directly to Nikita Khrushchev. In 1960, the then First Secretary of the Central Committee of the CPSU became the guest of honor at the presentation in France of a new jet passenger plane Sud-Aviacion "Karavella". This passenger liner made a serious impression on the Soviet leader, and when he returned back to Moscow, Nikita Khrushchev ordered the Tupolev Design Bureau to begin work on the creation of a Soviet counterpart. 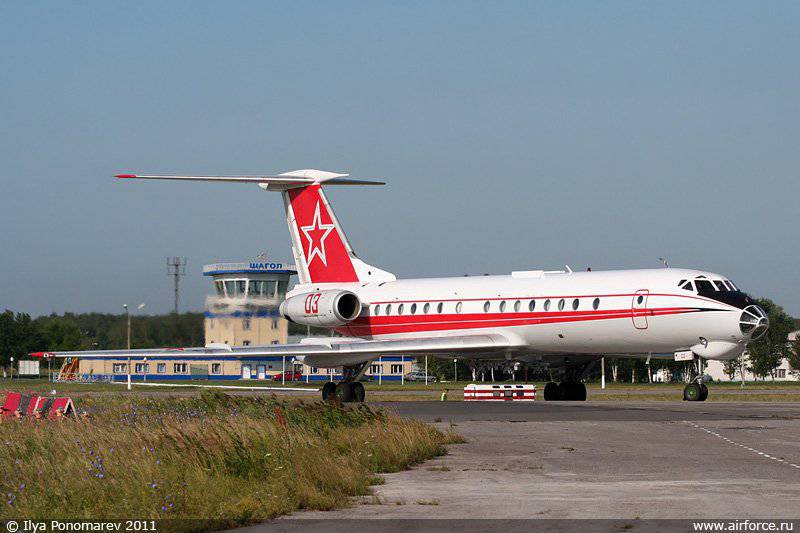 Tu-134Sh
At this time, work on the creation of passenger jet liners began at the same time in different countries of the world, the distinctive feature of which was the placement of engines in the rear fuselage on special pylons. These aircraft could include the American Boeing 727 and DC-9, the British VC.10, DH 121 and BAC111, the Dutch F28, and also the Soviet Il-62 and Tu-134.

This scheme primarily allowed to improve the aerodynamics of the car (through the use of the so-called "clean wing") and reduce the noise level in the cockpit and in the cabin, as well as significantly reduce the load from the gas jets of the engines running on the fuselage. At the same time, the airframe design became heavier and, as a result, the payload decreased. At the same time, the liner’s profitability decreased and maintenance of the aircraft tail assembly was complicated.

Initially, the short-haul liner Tu-134 was not designed as a new aircraft. In the Tupolev Design Bureau there was an idea to modernize the existing Tu-124 aircraft. This car had an extended fuselage, the engines were transferred to the tail section, and the plumage was replaced with a T-shaped one. This project received the designation Tu-124A and was proposed as early as 1961. The first 2 prototype Tu-124A were produced in 1963 year. In July of the same year, this car first rose to the sky. 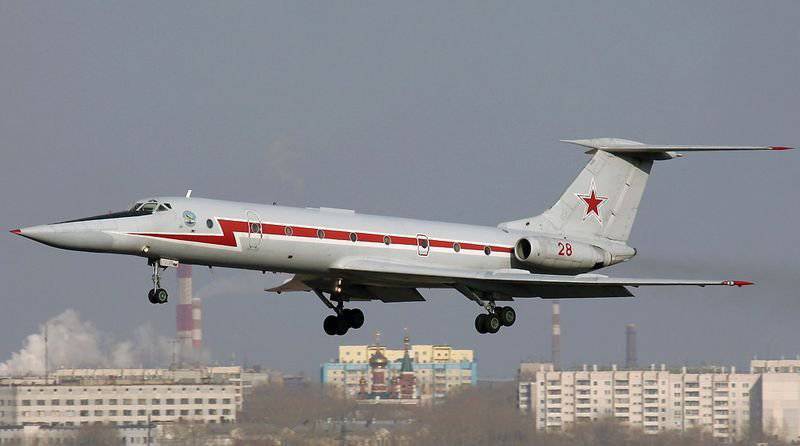 Tu-XNUMHUBL
Flight and certification tests of the aircraft began in the summer of 1963, and in 1965, the aircraft received the official designation Tu-134. At the same time, the release of the Tu-124 was finally stopped. The serial production of the new Tu-134 airliner began in 1966. The aircraft was mass-produced at the Kharkov Aviation Production Association for nearly 18 years (from 1966 to 1984 a year).

Tu-134 was designed for short-haul lines with a relatively small passenger traffic. Originally planned to place in the cabin 56 seats for passengers (50 seats in the two-class layout). However, from the first class on those airliners that were intended for lines within the USSR, it was soon decided to give up. For this reason, the number of seats was increased to 72.

In 1965, in Kharkov, 9 was able to assemble pre-production airliners designed specifically for flight testing. There was no reverse on these aircraft, for this reason the mileage after landing was quite large. It is worth noting that the Tupolev design bureaus were going to install brake parachutes on the airliner like the previous Tu-104 aircraft. But they rather quickly decided to give up this idea. At the same time, engines equipped with reverse, began to appear on the Tu-134 only in 1970 year. Over time, these engines have received all previously released aircraft. Up to this point, the Tu-134 helped to brake a special shield installed under the fuselage - a phenomenon quite rare for civil aviation. 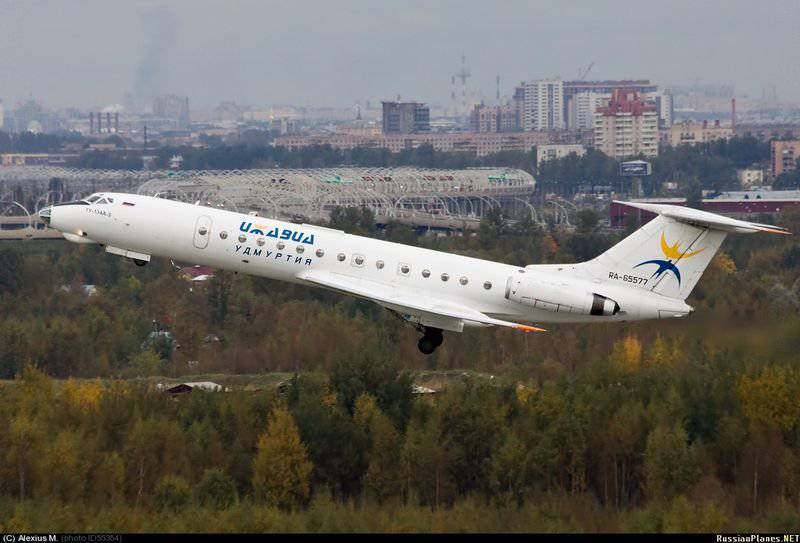 The first serial passenger liners Tu-134 were transferred to Aeroflot already in 1966, and in September of the following year, the first commercial flight en route Moscow-Adler was made on Tu-134. At the same time, almost 3, the new aircraft were used only on international lines, and only in the summer of 1969, they began to serve the lines within the USSR: Moscow-Kiev and Moscow-Leningrad. Tu-134 was actively sold for export: in 1968, the first aircraft were transferred to the East German airline Interflug, and a little later to the Polish company LOT.

In 1970, a new modification of the aircraft was created - the Tu-134A. The fuselage of the car grew by half a meter, a reverse appeared on the engines, the brake flap was removed, the number of seats increased to 76. As a result of these events, the maximum flight range decreased from 3100 to 2770 km, and at the maximum payload of the liner - to 2100 km. On aircraft that were intended to be exported, it was decided to abandon the navigator and mount on board the radar.

In the year 1980 in the USSR, the aircraft was launched in a modification of the Tu-134B. On this version of the aircraft from the navigator on board completely abandoned. In addition, passenger capacity was increased to 96 seats. The take-off weight of the aircraft increased to 47 tons. At the same time, design work began on the version of the Tu-134D, which was supposed to get engines with increased load (8 400 kgf), but the work on this project was not completed. Nowadays, Tu-134 airplanes are gradually being decommissioned, since most of the cars are physically and morally outdated: the most recently released Tu-134 units have already turned more than a quarter of a century. 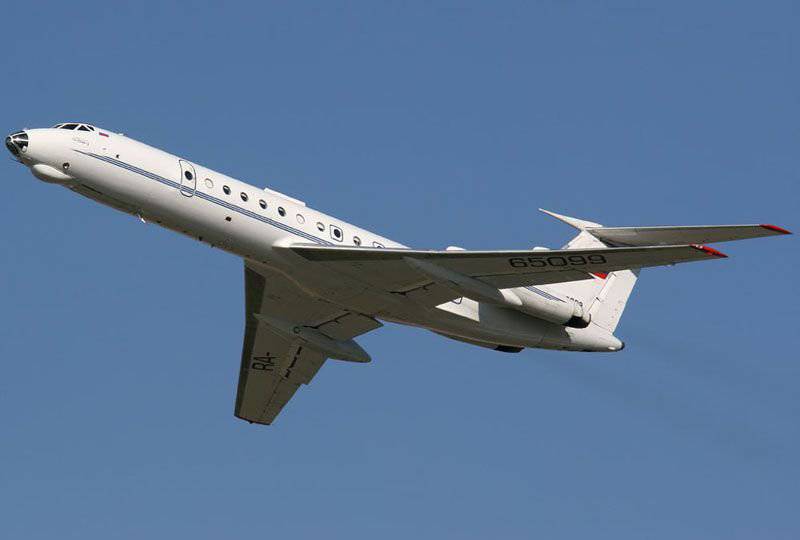 The engines on the Tu-134 were installed in the rear fuselage. Serial models of airliners were equipped with D-30 turbojet engines (PS-30) designed by Solovyov. This power unit is made according to a two-shaft scheme and consists of a separation housing with boxes of drive units, a compressor, a turbine, a combustion chamber, an output device and is equipped with a reverse. The engine is started using an air starter. The ignition system is electronic; it consists of the 2-x SP-06VP surface discharge candles and the SKNA-22-2А ignition unit.

Over the long years of operation, the passenger aircraft Tu-134 has demonstrated its reliability and efficiency, meeting the requirements of its time. In terms of reliability coefficient, this airliner proved to be almost trouble-free machine. An outstanding feature of the Tu-134 remains the unsurpassed so far restrictions on the values ​​of the lateral (20 m / s) and counter (30 m / s) wind components at the time of take-off and landing. In the conditions of the Soviet Union, where most of the airfields had only one runway, this quality of the Tu-134 played a significant role in increasing the regularity of flights.

After the entry of 2002 Chapter 3 of ICAO, which tightened noise standards for aircraft, came into effect in 16, operation of the Tu-134 aircraft in the EU countries was banned; today, the airliner is used almost exclusively on domestic routes in Russia and several CIS countries.

Flight technical characteristics of the Tu-134B: