July 31 2013
89
Recent events directly indicate that the formation of a new trend is beginning in Europe. After numerous discussions and criticism of the nuclear power plants of the state, assessing their prospects, they change anger to mercy. In particular, the issue of complete abandonment of nuclear power plants is no longer being considered. For example, France continues its policy and does not even think to reduce the nuclear energy sector, Germany slows down the pace of decommissioning its nuclear power plants, and the UK intends to modernize or replace the old power units with new ones. As the Italian edition of Il Sore 24 Ore notes, recently, European countries have understood the value and prospects of nuclear energy, which is why it will soon begin to play its former important role. At the same time, the technological aspects and safety of nuclear power plants are now given greater attention. This was probably due to the 2011 event of the year at the Fukushima-1 Japanese nuclear power plant.


Against the background of European processes relating to the abandonment of nuclear energy, one of the most daring and interesting projects of recent times in this area has appeared not in the EU countries, but in Russia. This is the construction of a floating thermal power plant (FAPP) "Akademik Lomonosov". While European politicians argued about the need to preserve or close nuclear power plants on the ground, Russian engineers and shipbuilders launched a full-scale construction of a completely new class of equipment. The result of this project in the coming years will be the emergence of a dumb vessel with nuclear reactors and generators on board. One FAPP of a new project with a capacity of 70 MW will be able to provide electricity and heat to a settlement in which about 200 thousand people live, or several large industrial enterprises. In addition, if necessary, “Akademik Lomonosov” will be able to desalinate sea water in quantities up to 240 thousand cubic meters per hour. 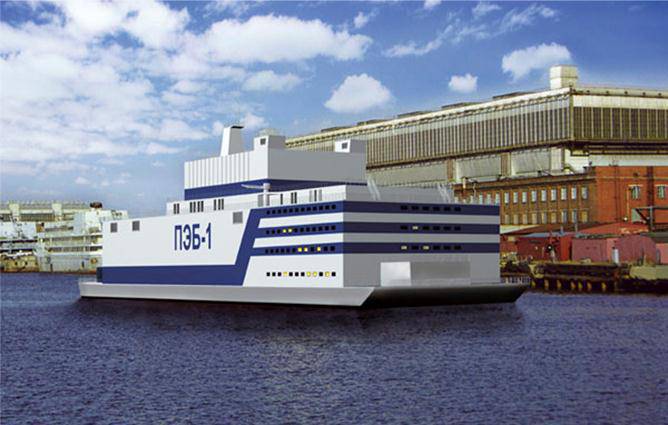 The first floating nuclear power plants of this project will serve in the northern and far eastern regions of Russia. In the future, the construction of a floating nuclear power plant for foreign customers is not excluded. Argentina, Indonesia, Malaysia and other countries have already shown their interest in such technology. Europe is still interested in only some technical details, but is in no hurry to initiate negotiations on the purchase or joint construction of a floating nuclear power plant. Probably the majority of European countries are not yet ready to engage in such bold, albeit promising projects. However, the Italian journalists from Il Sore 24 Ore could not get past one of the aspects of the new Russian project. They note the fact that nuclear reactors for a FAPP under construction are based on old Soviet military designs. In this regard, it is suggested that the use of reconstructed components and assemblies removed from the dismantled nuclear submarines is used.

It should be noted that the subject of floating nuclear power plants attracted not only Russian scientists and designers. For example, the French shipbuilding company DCNS, together with several specialized organizations, is currently developing the Flexblue project. It is planned to create a relatively large sea-based installation, but it will differ significantly from the Russian floating nuclear power plant. According to the current appearance of the project, French-made nuclear power plants will be a cylinder about 100 meters long and 12-15 meters in diameter. Inside the durable housing will house reactors and all necessary equipment. Before launch, such a power plant will be delivered to the right place a few kilometers from the coast, laid on the seabed at a depth of about 60-100 meters and fixed there. In accordance with this concept, submarine nuclear power plants with capacities from 50 to 250 megawatts can be built. This will allow supplying electricity to a settlement with a population of one hundred thousand to a million people. 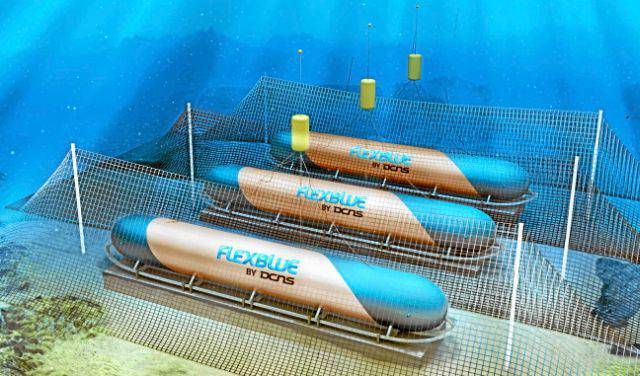 Other European projects of nuclear power plants of the new look are still at the earliest stages and are unlikely in the near future to reach at least the elaboration of technical documentation. Almost all European states that have their own nuclear energy, now intend to deal with its traditional form, which implies the operation of ground facilities. At the same time, promising technologies and types of atomic reactors are being investigated. In view of the ambiguous economic situation in Europe, it is hardly worth waiting for the construction of new nuclear power plants to begin in the near future. Moreover, just a few months ago, some countries that actively use nuclear energy (including France) declared that they would not build nuclear power plants in the near future.

As a result of all the recent events in the European nuclear power industry, an interesting but ambiguous situation has developed. Several countries are leading projects designed to improve equipment and the state of the industry, but economic problems prevent them from full-scale implementation. In addition, the current public attitude to nuclear power plants further complicates the situation with the prospects of the industry.

However, the capabilities of nuclear power plants, both stationary, made in the form of a complex of capital facilities, and floating or installed on the seabed, allow us to speculate about their future. Efficiency over time will allow such systems to regain their former prestige and lost share in total electricity generation. In the long term, nuclear power plants can continue their growth and press other types of power plants. However, at present the number of such power stations is not only not growing, but is also decreasing. Obviously, the expected change in the views of the responsible persons will not happen today or tomorrow, but now European politicians are refusing to simply shut down nuclear power plants without taking into account the consequences of such decisions. Therefore, it remains to follow the promising projects like the Russian FAPP or the French Flexblue and wait news on the development of nuclear power.

Ctrl Enter
Noticed oshЫbku Highlight text and press. Ctrl + Enter
We are
The development of small-sized nuclear power plants has begun.Dubious future of nuclear energy
89 comments
Information
Dear reader, to leave comments on the publication, you must to register.