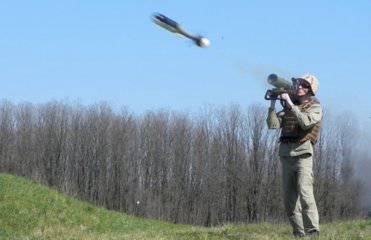 Ukraine is known for its attempts to enter the international arms market and gain a foothold on it. A few days ago, the Ukrainian media reported on the next development, which is expected to be able to find buyers and occupy its niche.


Information agency "Segodnya.ua" announces the testing of a new weapon system. A few days ago, tests of the anti-tank missile system (ATGM) RK-3 "Corsair" passed near Kiev. This ATGM was developed in the Design Bureau "Luch" and is designed to hit a wide range of targets. First of all, the targets of the Corsair are the enemy’s armored vehicles. In addition, the new ATGM, according to its creators, is able to destroy light watercraft, fortifications, helicopters and unmanned aerial vehicles. Thus, the newest Ukrainian ATGM is quite flexible in its application and is capable of solving a large number of tasks.

A characteristic feature of ATGM PK-3 "Corsair" is its appearance, due to the method of application. In this complex (perhaps only in its current version) there are no supporting devices, such as a tripod. The transport and launch container and missile guidance equipment are assembled in such a way that the operator of the complex must aim and fire, putting the Corsair on his shoulder. By this, the new Ukrainian ATGM resembles the FGM-148 Javelin American system of a similar purpose. However, in view of some peculiarities of views on the necessary qualities of anti-tank missiles, this is where all the similarities between the Ukrainian and American ATGMs end. 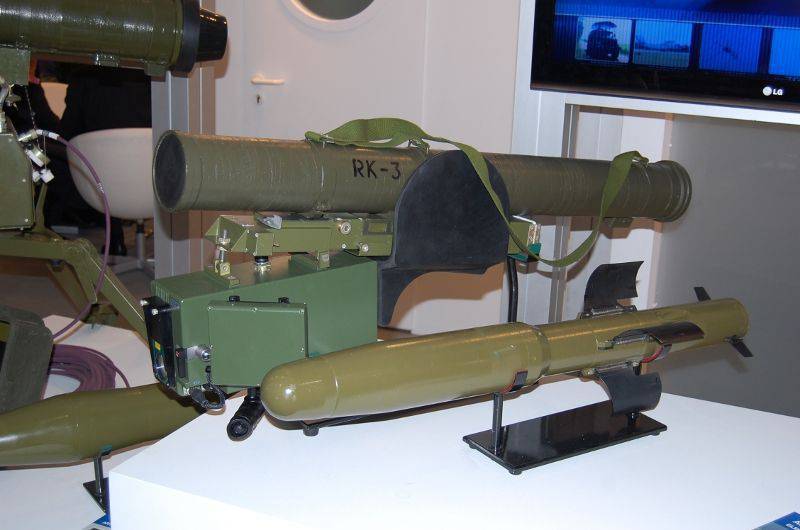 The developers of the complex PK-3 "Corsair" claim that at present it has no analogues abroad and surpasses the existing developments of leading manufacturers in a number of parameters. The stated maximum range of destruction is up to a kilometer 2,5, which is said to be twice as large as the RPG-7 grenade launcher. The mass of the container with the rocket without control equipment - 13,5 kilogram. The complex can be used at air temperatures from -40 ° to + 60 °, which exceeds the corresponding capabilities of a number of foreign ATGMs. According to reports, one anti-tank complex "Corsair" will cost the customer about 130 thousand US dollars, one missile - about 20 thousand dollars. This is several times less than the cost of foreign weapons of similar purpose.

It is alleged that the Korsar ATGM system uses a laser beam control system. Thus, after the shot is fired, the operator must hold the target at the crosshair. Next, the rocket itself remains on the desired trajectory, capturing the laser beam sent by the launcher. Such an anti-tank missile guidance system has long been used in many complexes and is considered one of the most convenient, although not without flaws.

The general director of the Ukroboronprom concern, which, among other enterprises, includes Luch Design Bureau, S. Gromov told Segodnya.UA reporters that the Korsar ATGM of the new generation is now in the final stages of development. This year it is planned to complete the project and present it to potential customers. The head of the state concern believes that the RC-3 complex will be the first system of this level proposed at the international level.

Announced information about the new Ukrainian anti-tank missile system looks ambiguous. On the one hand, Luch Design Bureau was able to apply some original developments in the Corsair project, but on the other hand, a number of the stated characteristics clearly do not reach the world's leading designs. For example, the range of destruction of targets up to two and a half kilometers is by definition not capable of distinguishing the Corsair against the background of other modern means of destruction, and comparing the range of firing of anti-tank systems and a rocket launcher in general looks like a bad joke. At the same time, at first glance, the insufficient range of the PK-3 may be justified and determined by the size and weight of the entire complex. However, the already mentioned American-made FGM-148 Javelin ATGM with approximately the same mass as the Corsair has a maximum launch range of about 4700-4800 meters.

Another specific feature of Corsair that can attract or deter a potential buyer is the method of application. The use of anti-tank guided missiles "from the shoulder" has long been a topic of lengthy debate. Not everyone agrees with the convenience of shooting in this way. It should be noted that in the case of the Ukrainian ATGM of the PK-3, another one is added to the already existing claims for such a launch technique. The fact is that the American Javelin complex, which also has no supporting devices, is made in accordance with the concept of “shot-and-forget”. Because of this, after firing, a fighter may lie on the ground or hide behind cover without putting himself at risk. A soldier armed with a Corsair will have to maintain his position for some time, directing the missile at the target. Rocket launch will give his position, and the laser guidance system will not allow to hide immediately. As a result, laser beam guidance and a specific method of launching in the most direct way can affect the loss of personnel.

In the light of specific indicators of firing range or safety of use in comparison with foreign systems of the same class, the PK-3 "Corsair" complex will have to attract potential buyers with other advantages. First of all, this is the price. This important parameter can seriously affect the solution of a potential customer and to some extent compensate for certain problems and shortcomings of a technical nature. Thus, you can roughly imagine for which part of the world arms market the latest Ukrainian development is intended.

In general, based on the available information, statements about the superiority of the new Ukrainian ATGM RK-3 "Corsair" over foreign counterparts can be considered too loud and hardly correspond to reality. Even the declared characteristics do not allow to see in it a certain exemplary project, on which it is worth being equal to foreign manufacturers of anti-tank weapons. At the same time, the very fact that Ukraine has created its own ATGM speaks volumes. This country demonstrates an enviable persistence in developing its own weapons and trying to enter the international market. If this persistence does not fade away, then the Corsair may be followed by more advanced anti-tank missile systems, the capabilities of which will allow competing with some representatives of the world elite of arms and military equipment manufacturers.