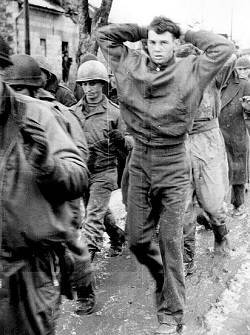 For any soldier, war is hard work, with every second risk of losing life. The only thing that helps him to maintain a healthy psyche and endure deprivation - weapon in the arms and shoulder of a comrade. But what happens to a soldier when an enemy captures him prisoner? To the physical suffering and deprivation of liberty adds a strong psychological pressure from the enemy, the conflict between the sense of duty and the elementary human desire to survive ...

In total, tens of millions of people passed through captivity during the Second World War and after it ended, many of them died or were missing. The Soviet Union suffered huge losses among prisoners of war, as well as in general in war. Of the 5,7 million Red Army soldiers who were captured, 3,3 million people did not return to their homeland.

True, as it turned out much later, some prisoners of war released from concentration camps by units of the allies simply did not want to return to the USSR. They probably had a good idea of ​​what awaited them, although they were not familiar with the cryptogram of Marshal Zhukov, in which he ordered not only all the Red Army soldiers who had come out of captivity, but also their families to be shot. “All families who surrendered to the enemy will be shot, and upon returning from captivity, they will also be shot”, Zhukov transferred this recommendation to the Baltic command fleet and front armies on September 28, 1941.

The code was found not so long ago in the archive documents of RGASPI. She was quoted in a letter from the Chief of the Main Political Directorate of the Workers 'and Peasants' Navy, Army Commissioner Second Rank Ivan Rogov, to the Secretary of the All-Union Communist Party Central Committee Georgy Malenkov, dated October 5 of 1941.

In the order of Stalin for the number 270 ordered only "to deprive of state benefits and assistance" of the family of the captured soldiers of the Red Army. Families of captives from among the commanders and political workers awaited arrest. Zhukov tried to go further, but the political department of the Baltic Fleet decided to soften his order and ordered to shoot upon return only the defectors themselves.

Thus, it does not matter whether Red Army soldiers accidentally or deliberately were captured, many of them were well aware that the way back to them was closed. The stalemate of the Soviet soldier created good conditions for the enemy to conduct ideological processing among the prisoners of war, and even the formation of military units from them. 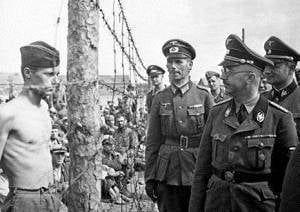 During the period of the Great Patriotic War, about 3,2 million Wehrmacht servicemen were captured by the Soviet Union, while 1,1 million people died in captivity. Naturally, the overwhelming majority of prisoners of war, on both sides, were ordinary soldiers and junior commanders. They suffered hunger, cold, epidemics, hard work and other captivity. Privates were used as gratuitous labor, and the attitude towards them was appropriate. A completely different attitude developed towards the captured high military ranks.

Senior officers were less than 3% of prisoners of war, but they were of particular interest in terms of use in reconnaissance and political maneuvers, and therefore most of all experienced psychological pressure. As an example of successful ideological processing, we can consider the fate of German officers captured after the Battle of Stalingrad. 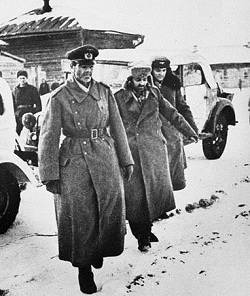 The enemy grouping surrounded at Stalingrad capitulated at the end of January 1943. 91 thousand soldiers, 24 generals and 2500 officers were taken prisoner. The commander of the sixth army, Field Marshal Friedrich Paulus, was also in captivity. He and all the captured Wehrmacht top officers in the summer of 1943 of the year got into a specially created "general" camp No. 48 located in the village of Cherntsy, Ivanovo region. After each successful operation of the Red Army, the number of German generals in the camp increased.

No atrocities were observed in the camp, no one beat or tortured the prisoners. Prisoners even called the camp “castle” because of fairly good conditions. Of course, the camp area was surrounded by barbed wire and guarded. Going beyond the territory and contacts with the local population were strictly prohibited. But the prisoners themselves, more correctly, were not kept, but lived comfortably in a well-renovated old manor, they had orderlies from their own, ordinary soldiers.

In the daily routine, only hours of sleep and eating were accurately tracked; the rest of the time, the generals conducted at their own discretion. At their disposal were a garden and a garden, carpentry workshops. Paulus drew a lot, some of his drawings are still kept in Chernetskaya High School. Reading, as well as learning the Russian language was encouraged. For those who wish, courses on the study of the Russian language were organized, and teachers were invited.

If necessary, the books were delivered directly from the metropolitan library to them. V.I. Lenin. The generals read and translated Lev Tolstoy and Gorky, Sholokhov and Ehrenburg. Someone after some time, at his own request, began to read Lenin and Stalin. Soviet pre-war comedies were often shown in the camp. The generals regularly read the Soviet press and were well aware of all the events taking place at the front. The camp administration organized discussions on the given topics. Wehrmacht officers prepared and made reports on the reasons for the defeat of Germany and on the possible post-war world order. 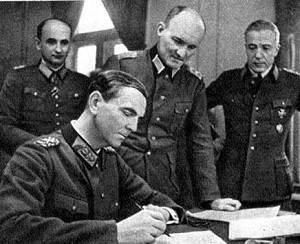 Such a well-adjusted, quiet life, seasoned with Russian culture and Soviet literature, bore fruit. Less than a year, several generals took anti-fascist positions and agreed to cooperate with the Soviet authorities. General von Seidlitz, for example, became one of the leaders of the anti-Hitler coalition and leader of the German officers organized in the camp.

Already in October-November, 1943 of the year von Zeidlitz was brought to that sector of the North-Western Front, where his strike group was fighting at that time. There he wrote letters to the commander of the 16 and 18 armies and the commander of the Nord group, made flyers, recorded records with performances. In them, Seidlitz called on German soldiers and officers to change their attitude towards the war, and to save Germany from the collapse, to which Hitler inevitably led the country. All this information was transmitted through parliamentarians and scattered from aircraft over German positions.

8 August 1944, the long-resisting Field Marshal Paulus, agreed to openly oppose Hitler with a call to the German army. A message about this was immediately sent to Stalin along with the text of the appeal signed by Paulus and 40 more by generals and officers. The reason for this, of course, was the fundamental changes during the war, information about which was carefully communicated to the field marshal (advancing the Soviet army to the borders of Germany, declaring war against Germany by Germany, attempting to kill Hitler, etc.). From this point on, Paulus revised his position on the anti-fascist movement and on August 14 joined the Union of German officers.

Of course, loyalty to the prisoners was observed only as needed. The further fate of the same General von Seidlitz is quite tragic. The former commander of the 51 Army Corps, sentenced in absentia by the Nazis to the death penalty, was convicted by the Soviet military tribunal 8 on July 1950 of the year for 25 years and placed in Butyrka and then Novocherkassk prison. His wife and four daughters were kept during the war in a fascist concentration camp — as a family of a traitor to their homeland, and after the war already in the Soviet Union — as a family of a war criminal. When Seidlits learned about the fate of his loved ones, his psyche could not withstand this blow, and doctors recognized he had a reactive psychosis.

The fate of Field Marshal Paulus was more favorable, he was not put in prison. However, his repatriation, scheduled already in 1949, was postponed under various pretexts. The Paulus family in 1944 was also arrested by the fascists and kept in a concentration camp. The wife died, without waiting for his return. When the field marshal fell ill, he was treated, taken to the Crimea, kept in good conditions, but the request to return to Germany was rejected. Field Marshal Paulus returned to his homeland only in 1953, after the death of Stalin.

And in the “general's” camp, up to 1956, generals and officers of the Japanese army underwent ideological processing. After their repatriation, it ceased to exist, and now it is just a monument stories.

Ctrl Enter
Noticed oshЫbku Highlight text and press. Ctrl + Enter
We are
Ruins of Corfe CastleMyths of the Great Patriotic. Why did the Stalingrad prisoners die?
Military Reviewin Yandex News
Military Reviewin Google News
29 comments
Information
Dear reader, to leave comments on the publication, you must to register.