Under the blows of the "opposition" - one and all 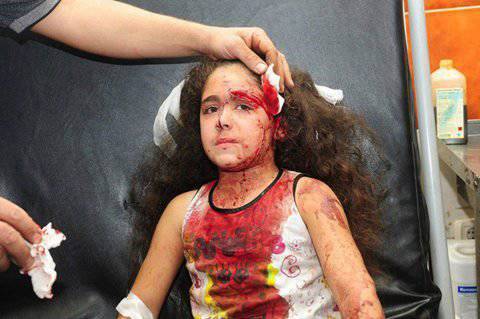 Fighters for "democracy in American" continue to kill Syrians - and famous people, and intellectuals, and ordinary citizens. The "Opposition" also continues to travel around the world, begging weapon from Washington and other countries. They are received, high-ranking officials talk to them - and the bloodshed continues.


25 July a series of terrorist attacks occurred in Damascus and its suburbs. So, everyone in the same long-suffering Dzharamane - a city where many Christians live, a city where the militants did not manage to enter, although they were desperately trying - a car bomb exploded in the crowded Al-Suf Square ...
Blood, demolished houses, wrecked cars - this is the sad picture of “democracy in an American way”. A girl of years 12 with a bloody face ... Hell, where the remains of people and fragments of concrete mixed in a heap ... 10 people died, more than 60 were injured, among them women and children. Many are in serious condition.

Another attack on the same day occurred in Damascus, in the Mezze area. He led to the injury of two people.

The gangsters continue to destroy representatives of the intelligentsia, national cadres, people who achieved fame and refused to support their criminal pseudo-revolution ... On the same day, July 25, an attack on the female doctor Raghad Al-Farra was made in Damascus in the Marshua Dummar quarter. To the bottom of her car "opposition" attached an explosive device. It exploded when the doctor got into the car. The woman was seriously injured and in critical condition was taken to hospital.

A few days earlier, gunmen shot the volleyball player, former player of the National team, coach Firas Al-Ayid. He was in Homs, where he was engaged in the preparation of a volleyball team. Returning to Damascus, came under fire from terrorists near the city of Deir-Atya. The athlete was seriously injured and taken to hospital, where he soon died. He was 35 years old, he left a wife and two children.

In the province of Aleppo, “freedom fighters” fired on a bus in which Syrian Armenians tried to go to Beirut. One woman, 40-year-old Tamara Sirunyan, the mother of two children, was killed, the 17 man was injured.

At this time, US Secretary of State John Kerry met with representatives of the "Syrian opposition," which was attended, in particular, by its current leader Ahmad Zharba and former "leader" Burkhan Galyun.

Of course, “the opposition asked for weapons. "The US commitment to providing military assistance to the Supreme Military Council is vital, but it must be done as soon as possible and in such a way that we can protect ourselves and civilians," said Zharba.

Apparently, in his opinion, all these attacks, all these killings and attacks on defenseless people - this is “the protection of civilians!

It turns out that these recent attacks were made in order to demonstrate the results of his work?

The world is showing solidarity with Syria

In many countries of the world, including Russia, actions of solidarity with Syria took place these days. Somewhere there were meetings, and in those countries where holding meetings is impossible - conferences and meetings.

In Moscow, the action was held under the leadership of the National Union of Syrian Students and the Anti-Globalization Movement of Russia. She passed in front of the US Embassy on Novinsky Boulevard. The participants sharply condemned American attempts to intervene in intra-Syrian affairs in the form of terrorist weapons and informational hype around the use of chemical weapons, despite the fact that Russia provided clear evidence that chemical weapons were used by the "opposition."

In the United Arab Emirates, where it is impossible to hold rallies, a meeting was held with the participation of representatives of the Syrian community and citizens of the UAE, who support Syria in its difficult struggle. They angrily condemned the criminal activities of terrorists against civilians, journalists, intellectuals, and stated that they support the program of peaceful settlement of the crisis, proposed by its president Bashar al-Assad.

A rally was held in Armenia under the slogan "We are all for the Motherland". The participants honored the memory of the fallen Syrians with a minute of silence. They also condemned the position of the United States, Turkey, and other countries supporting the militants.

A conference in support of Syria was held in Romania. It was attended by politicians, doctors, lawyers, scientists, members of trade unions. The event was held under the auspices of the Dean of the Faculty of Political Science of the University of Craiova, Professor Leon Diaconescu. In his speech, the professor said that Syria is a very important state playing a key role in the Middle East. He condemned the policies of the United States, France and Britain, who say they are fighting terrorism in Afghanistan, Mali and Yemen, while supporting terrorists in Syria and Egypt. According to him, the governments of those countries that provide support to the bandits should be brought to an international court.

The director of the Craiova Military Hospital stated that his medical facility is ready to accept wounded Syrians for treatment.

During the ascent of a group of climbers on Kilimanjaro, the Syrian national flag was raised. Shadi Al-Kadamani, a member of the expedition working in Dubai, said he was proud to have raised “the most beautiful and expensive flag” to the top of the mountain.

So, despite the best efforts of the terrorists and the forces that support them, the Syrian flag maintains its high positions. After all, Syria today is fighting against the global forces of evil, against the new fascism, acting through the hands of others and putting the mask of "democracy" on outright bandits.