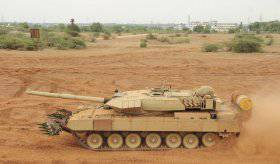 The final test of the new Indian main battle tank (MBT) "Arjun-II" (Arjun Mark II) will be held in early August this year in the state of Rajasthan. This was reported by the weekly Weekens Weekly.
Although tests of the partially upgraded versions of the Arjun II tank are already underway, one completely new tank will take part in the tests for the next few months, in the design of which 73 of 93 improvements have been made, including 19 of major modifications to the requirements of the army.


As the head of the research and development department of CVRDE combat vehicles (Combat Vehicle Research and Development Establishment) Dr. Shiv Kumar, in charge of upgrading the Arjun II MBT, the remaining 20 additional improvements are related to the tank’s armament, they can be implemented separately.

According to a source in the Ministry of Defense of India, Arjun II will include improvements compared to Arjun I, including active-reactive armor and a nighttime thermal sight of the tank commander, replacing the day sight set on its first version. The machine will be equipped with Israeli Lahat light anti-tank guided missiles (LAHAT), equipped with a laser countermeasure system integrated into the gun. The laser beam intercepts an approaching enemy missile, after which the crew has 93-10 seconds to respond to the threat. However, within a few milliseconds, the tank’s onboard protection system automatically fires smoke grenades to form a smoke screen and disrupt the missile guidance.

The tank is equipped with an automatic target tracking system and an improved ground navigation system.

The auxiliary power unit of the tank has a power of 8,5 kW (instead of 4,5 kW), the 120 mm caliber gun has an improved barrel, the tank commander’s panoramic sight provides protection from the laser range finder radiation. The crew consists of four people: the commander, gunner, loader and driver. The mass of the new tank 67 tons, while the mass of MBT "Arjun-I" is 60 t.

Resource tank gun designed for 500 shots, which is twice the life of the gun tank T-72. The seat of the tank commander is equipped with an improved panoramic sight.

The new tank has a low and less vulnerable silhouette. The same German diesel engine MTU 838 Ka-501 of MTU and the semi-automatic transmission RENK 304 S are installed on the Arzhun-II as a power plant, although more distant plans provide for the use of a nationally developed engine developed in cooperation with Western manufacturers.

If the tests are successful, the machine will be ready for commissioning at the beginning of 2015. The armed forces ordered the 124 tank Arjun II, which will be manufactured in the southern state of Tamil Nadu. The machine will cost 370 million rupees (6,27 million dollars) per unit.

Ctrl Enter
Noticed a mistake Highlight text and press. Ctrl + Enter
We are
American armored vehicles: forward movementWorld market and production of armored vehicles (part 3 of 3)
53 comments
Information
Dear reader, to leave comments on the publication, you must to register.