The Russians are afraid of the influx of migrants. Australian Immigration Solution

July 30 2013
249
Believing or not believing sociological polls is a private matter for everyone, just like everyone’s private matter is to draw their own conclusion based on the results of these polls. One, looking at the essence and results of the survey, will say: interviewed wrong, not those in the wrong place. Another will say that the survey is objective and not subject to criticism. However, we will not go into the analysis of sociological works as such, but rather present the results of another such study, which was conducted by VTsIOM.


The essence of the survey was as follows: the Russians were asked to designate the greatest, in their opinion, threat to the country. The survey was conducted in mid-July in 130 locations across the country. It involved 1600 respondents of different ages, representing different social groups. At the same time, VTsIOM claims that the accuracy of the results is no more than 3,4%. 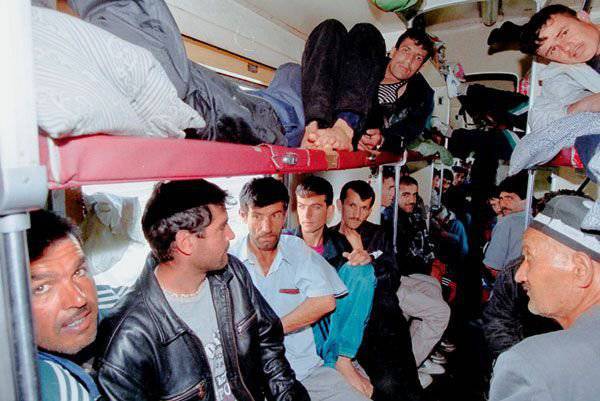 And the results were as follows: the third place in terms of its magnitude was that the respondents placed terrorist acts against important strategic sites and an environmental catastrophe (28%), according to VTsIOM, the second place was given to such a problem as the decline of culture, education and science. But most of all, judging by the results, Russians are worried about the problem of uncontrolled influx of migrants and the settlement of the country by representatives of foreign nationalities. This problem is the main for Russia called 33% of respondents.

The low standard of living, population extinction due to relatively low fertility rates, the split of the ruling elites, the exhaustion of hydrocarbon reserves did not fall into the top three most dangerous problems.

After the announcement of these results, the Russian media began to practice who would obstruct the presented data and VTsIOM itself. They started talking like this: they say that this VTsIOM was interviewed at all if even the top five Russian problems did not include the threat of the spread of drug addiction and corruption.

Of course, you can once again write out the claims to VTsIOM, but whether it is worth mentioning in this connection those concerns expressed by the Russians and presented by this very VTsIOM to the public, as they say, to the court? If the largest percentage expressed in the spirit that the problem of immigrants is today the greatest threat to the country, then it is at least foolish to ignore. No one is going to deny that drug addiction and corruption are gigantic problems, but the respondents clearly spoke about the most painful: they hardly ever have to deal with bribe takers or drug addicts, but passing through the city streets (especially the streets of a large city), the problem of uncontrolled migration visible, as they say, to the naked eye.

You can also try to shout out to those 35% mentioned, stating that uncontrolled immigration also grows on the basis of total corruption, but that this will eventually change? .. People were asked to identify the problem - they identified it. What could be the claim ...

This once again proves that the uncontrolled migration process (both from outside and inside Russia) causes obviously unfounded concerns among millions of Russians. In previous articles on this topic, “Military Review” has already published data on the hypothetical number of illegal migrants in Russia and the number of crimes that these people commit. And these numbers are truly overwhelming readers. Millions of nowhere registered persons who completely ignore the Russian laws, traditions and foundations of that society, side by side with which they decided to live, fill the cities with such intensity that sometimes entire neighborhoods turn out to be populated exclusively by immigrants (mainly from the countries of Central Asia).

Representatives of government agencies have repeatedly stated that this problem will be effectively addressed using the full range of legal tools, but only things are there. Any initiative is broken about the interest of a certain circle of people in cheap labor, for which there is no need to report and bear responsibility. People actually are, but legally they are not. This is so convenient for those gentlemen who do not want to merge into the legal field, because this infusion will deprive them of the super-profitable feeders. Conveniently, apparently, at various levels ...

As a result: the number of foreigners without a residence permit, registration, work permit and any obligations to the Russian state and society is growing. These people are well aware of the fact that they are a bargaining chip in the games of big people, and that they are beginning to have more and more weight in Russia's internal (especially labor and social) politics. And if this or that community begins to realize its importance, especially the significance outside the legal field, then this very community begins to dictate conditions gradually. At first, everything is tied up at the level of such unobtrusive dictatorship - dumping in the labor market, offering more for less, and then unobtrusiveness can disappear, and a frank dictate dictates it to replace it with a criminal ghost. And if we take into account that domestic officials themselves gave rise to this organism, which has already matured and matured, which is imbued with anti-law disputes, it becomes clear that their courage is clearly not enough for its elimination with transfer to the legal channel. Neither courage nor, in principle, a great desire.

Mass deportations will begin - our “human rights activists” will immediately raise their heads, who in such situations take such defensive positions that it becomes unclear how this defense is generally related to providing legal support to indigenous Russian citizens ... Of course, these squeals and screams can be ignored, but Russia is positioning itself solely on the rule of law. Moreover, this position is also manifested somewhat strangely. So it appears that the interests and rights of the indigenous Muscovites, Novosibirsk or Voronezh residents can be completely ignored at the expense of the interests and rights of the indigenous Dushanbe, Goulistan or Kara-Baltai, who managed to build a life in the Russian Federation.

One gets the impression that this problem concerns only ordinary Russian citizens, but does not care at all about big business and officials. Why? Because ordinary Russian citizens (especially residents of large and relatively large cities) come across it regularly, and officials, as was aptly stated in the famous film “Kin-dza-dza,” live “on another planet” and take illegal immigrants exclusively as a source permanent "left" income. Why should they worry about this if everything is grasped ...

By the way, is there any advanced foreign experience in this regard? For example, you will have to go to another hemisphere - to Australia. The local government decided to demonstrate greater rigidity in addressing the issue of foreign migration. This is due to the fact that over the past few years, the influx of foreigners who have arrived for permanent residence on the Green Continent has increased significantly. In this regard, Australian Prime Minister Kevin Rudd outlined the contours of the new migration policy.

Now, all those who wish to come to Australia for work or as refugees will first be sent to an Australian temporary detention center, which is located in ... Papua New Guinea. And already this way everyone who arrives will be waiting for a decision on whether the Australian authorities will give consent for granting refugee or labor migrant status or not.

Today, the main flow of migrants to Australia goes through Indonesia. And the Australian authorities explained their decision on the placement of migrants in Papua New Guinea by allegedly fearing for the life and health of people who sail on fragile vessels along the sea to the Green Continent. Clever, isn't it ... And although the UN has already scolded the Australians for such an approach, it has not led to its fundamental changes.

But this is a great example for our state. If a person really wants to live and work on the territory of the Russian Federation, having neither a profession nor education, and a priori not intending to respect the traditions of the Russian (any other Russian) people, then for God's sake ... We have many territories where work is no end . Novaya Zemlya, the island of New Siberia or Stolbovoy - and under its own power ... Yes, there are so many items with hospitable staff for immigrants can be accommodated, that even Papua New Guinea will envy ...

Only here Kevin Rudd has a political will, but ours do not have it.

Ctrl Enter
Noticed oshЫbku Highlight text and press. Ctrl + Enter
We are
Report on the results of the survey-2013 "Evaluation of state political figures"
Military Reviewin Yandex News
Military Reviewin Google News
249 comments
Information
Dear reader, to leave comments on the publication, you must to register.