July 27 2013
35
What will be the warships of the future? While the first prototypes and published sketches evoke images of ancient battleships or ocean transports from science fiction films. But the appearance is not the main thing.


The aspirations of engineering in the design of surface warships are a reflection of the military-political concepts of the respective countries. The first thing that catches your eye is the general fashion for low visibility, or stealth technology. It is these technologies that give the ships a futuristic look, and the first in this row is the Swedish corvette Visby, launched in 2000 year. The characteristic angular design, which impedes radar, lightweight composite plastic body, a minimum of protruding elements.

The Swedish concept was that a nimble and subtle corvette would sooner detect an enemy target in coastal waters and destroy it, than it would be discovered and destroyed by itself. In the January issue of PM, she wrote about the newest Russian corvette of the 20380 project, which also used composites and elements of stealth technology.

Now, when looking at the trimaran of the USS Independence, a representative of the new class of coastal zone warship (Littoral Combat Ship, LCS), the characteristic features of stealth seem to be something that goes without saying. But if Visby and the Russian corvette are intended for operations in the national coastal zone with defensive targets, then LCS is obviously designed to participate in operations primarily on foreign shores. And this indicates a lot.

Strictly speaking, LCS is two different projects. One is the development of the Lockheed Martin Corporation, a single-hull ship. The project's firstborn in 2006 was the USS Freedom. The second version of LCS, the brainchild of General Dynamics, is a trimaran (number one in the series is USS Independence). Initially, the US Navy planned to make a choice of these two concepts, but then it was decided to finish building both lines with new ships.

However, since the famous weapons corporations performed a similar technical task, the parameters and capabilities of the two types of LCS were pretty close. The main thing that you immediately pay attention to is the cruising range quite decent for a coastal ship. The Lockheed Freedom has 3500 nautical miles at a speed of 18 knots, the Independence has 4300, which is almost 8000 km. Autonomy - 21 days. The second is the maximum speed of about 45 knots (83 km / h) and is provided by water-jet engines. This significantly exceeds the performance of Visby (35 knots) and the mentioned Russian project 20380 corvette (27 knots).

It is clearly talking about something more than just replacing obsolete corvettes and mine-sweepers, especially if we recall that at the time of launching the USS Freedom became the representative of the only class of American warships put into operation for all previous 20 years.

The appearance of lightweight high-speed ships, close in class to the corvettes, was the result of awareness of the new reality. But the reality was that the AUG, heavy cruisers and destroyers were well suited to show strength in the Cold War era, but for smaller-intensity conflicts, more subtle and cheaper tools were needed. Among American military analysts, even the concept of a “street fighter” was born - an inexpensive, small, specialized ship that can operate in shallow water in the coastal zone of the enemy.

The idea of ​​LCS is close to this concept - Freedom or Independence is easy to imagine performing tasks somewhere off the coast of the Persian Gulf. There such vessels could hunt diesel submarines and high-speed rocket boats (on which Iran hopes), free the water area from mines, conduct reconnaissance and eventually clear the way for a large-scale invasion from the sea.

And what about specialization? This problem is easily solved at the expense of modularity, which is structurally embedded in both LCS projects. Modularity is obviously another basic trend in the development of both surface and submarine warships. When applied to ships of the coastal zone, this means the possibility of equipping them (depending on the upcoming operation) with a module to combat mines, a module for anti-submarine operations or a module to counter the enemy on the surface of water or land.

The modules are placed in special containers that are easily mounted on the ship, and, if necessary, are quickly replaced by others. The modules include a variety of reconnaissance equipment: for example, a robotic autonomous probe is used to detect mines, underwater sensors and air-based systems are used in anti-submarine warfare: LCS can carry a pair of MH-60R helicopters on the deck, as well as UAVs.

The 30-mm gun mk46, producing 200 shots per second, as well as NLOS launchers (out-of-sight) with high-precision missiles, are included in the “package” of countering the enemy on the surface.

“Closer to the coast” - this could be the slogan of many projects of promising warships. The long-publicized new class of destroyers with missile weapons - the so-called Zumwalt class - will perform their functions equally well both in the far sea zone and in the coastal shallow water. The first representative of this class DDG 1000 Zumwalt is to be launched shortly.

It is characteristic that this destroyer, which for the first time in more than a hundred years will be built according to a scheme with an expanding hull (a la cruiser Aurora), was particularly interested in the command of the US Marine Corps. “Marines” view Zumwalt as a powerful support for naval assault. The ship could help the assault with rocket and artillery strikes to the rear of the enemy, as well as provide air defense of the site of the operation. It was even suggested that the destroyer of the class Zumwalt is able to act as a supporting element of the Freedom or Independence type LCS operating in the coastal waters of the enemy.

For the sake of operations in the coastal zone, special attention was paid to stealth, which, in fact, dictated the unusual design of the ship. And this is despite the fact that the Zumwalt (14 500 T displacement) actually has the dimensions of a battle cruiser and significantly more of a class destroyer with missile armament of the Arleigh Burke type. Zumwalt bears the helicopter and three multi-purpose drone MQ-8 Fire Scout, built on the helicopter scheme (the same equipped and LCS).

In the design of the destroyer, another interesting trend in shipbuilding is visible - the transition to a single electrical source. Two Rolls-Royce Marine Trent 30 gas turbine engines spin Curtiss-Wright generators, and the propellers that drive the rotors are powered by this electricity. In addition, it is possible that various promising weapon systems like railguns will be powered by electricity in the future.

British BAE Systems, as a rule, actively participates in large American defense projects, however, it also has its own developments that fully meet current high-tech trends. In particular, approximately from 2012, the “Royal Combat ShipType 26” should be adopted by the Royal Navy of Great Britain.

“Type 26” by displacement refers to frigates (that is, it is more than a corvette and less than a destroyer), and it will eventually become a “workhorse” fleet, which suggests a high degree of versatility. This will be achieved, naturally, with the help of a modular design - the ship can easily be converted to combat piracy, a humanitarian operation or the task of establishing a blockade of the coast.

But perhaps the funniest British concept of a future surface ship (this is also a BAE project, although its timing is unclear) can be considered the so-called UXV Combatant. This ship the size of a destroyer is designed to become a floating base, focused on work with unmanned vehicles, both flying and floating.

It is assumed that the UXV Combatant will serve a small crew (about 60 people), and all the ups and launches of reconnaissance or strike drone can be done automatically. In the end, it is probably this British project that shows where the entire arms industry in developed countries is gradually moving, and shipbuilding is no exception: soon robots will be sent to war. 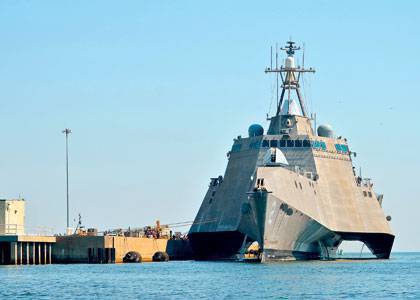 The design of the USS Independence is based on the design of the high-speed ferry Benchijigua Express, developed by the Australian company Austal. Nowadays, civilian shipbuilding is often technologically ahead of the military. 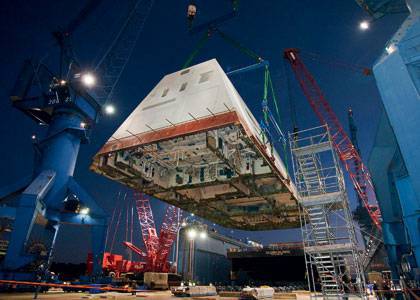 The integral superstructure and unusual hull will make Zumwalt-class missile destroyers look like submarines. Perhaps they will be able to fight in a semi-submerged state to ensure greater stealth. 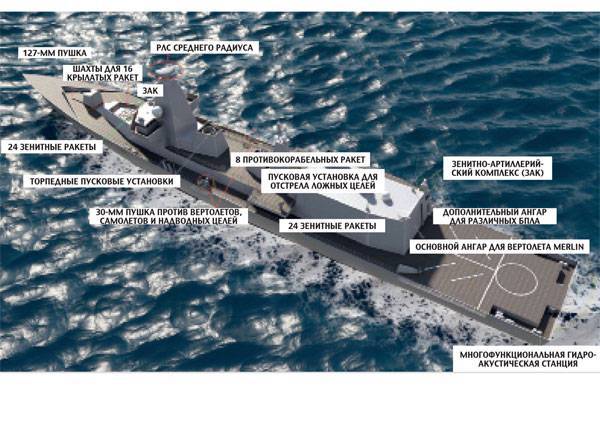 Britain has a very advanced development. In addition to the high-tech destroyers "type 45" creates "type 26" - a frigate, called the "Global Warship."