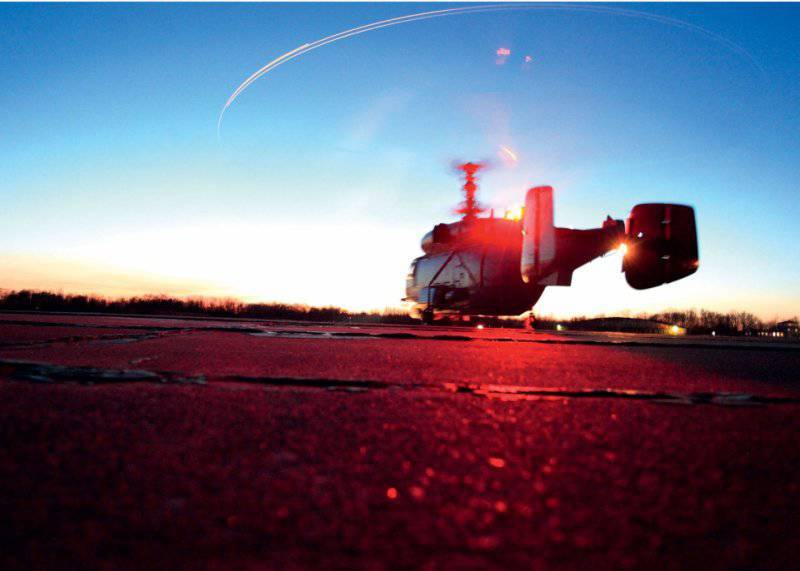 Sunset on the Baltic coast is very beautiful, but in the Donskoy almost no one pays attention to the setting sun. Pilots and technicians of a separate naval anti-submarine helicopter squadron of the sea aviation Of the Baltic fleet not to the beauties of nature: preparation for night flights begins.


Outside, the Ka-27PL helicopter does not look particularly elegant. He has no "predatory" or "high-speed" contours. By modern standards, its cruising speed is not particularly high - only 250 km / h. But, as one of the pilots said aptly, “no one goes fishing in a race car.” Meanwhile, it is “fishing”, or rather “underwater hunting”, that is the main task of these helicopters.

“Our helicopters, which can be based even on relatively small ships, greatly expand their capabilities in terms of anti-submarine defense,” explains the assistant navigator of the Donskoy airbase, Major Igor Vysotsky. “On the far lines, anti-submarine airplanes provide for the opening of the underwater situation, while the share of the helicopters remains for the near-boundary lines.”

The main "weaponThe Ka-27PL is the Octopus search and sighting system. It provides automated processing of information from the hydroacoustic station (GAS), radar, navigation systems and tactical conditions. Hanging above the water at a height of about 30 m, the helicopter lowers the HAC hydrophones on the cable, which can operate both in the passive mode and in the active mode, with a circular or sector orientation.

“Hydrophone deepening depends on the sea hydrology, temperature, salinity, weather and other factors,” explains Igor Vysotsky. - Since the depths in the Baltic are rather small, several tens of meters are enough here. To open the underwater situation within a radius of several kilometers usually takes from 3 to 10 minutes, although it all depends on the conditions.

For example, shallow water facilitates the search, but a large amount of all kinds of iron (ship hulls, barges, cargoes) at the bottom makes it very difficult, especially in the active mode - they give an irregular acoustic picture, so you have to check with the maps where such features are marked. Actually, for the same reason in the Baltic is not very effective search using a magnetometer, although in other seas, you can use this method. A lot of problems are also created by the wind, which deflects the cable from the vertical position, distorting the direction of the hydrophones. ”

In addition to GAS, the Ka-27PL can carry a set of 36 discharged sonar buoys. “The buoys are dropped from a horizontal flight at a decent height in order to cover sufficient territory,” says the navigator-operator of an anti-submarine helicopter, senior lieutenant Camille Sibagatov. - Each buoy descends by parachute, deepens and, working in the passive mode, controls the situation within a radius of several hundred meters.

And in case of detection of a noise signal, it starts transmitting this data over the air. As a result, during one sortie, the Ka-27PL allows you to open the underwater situation in a radius of approximately 20 km (without dumping the buoys — a bit less). The detection radius of a submarine varies within fairly wide limits - from tens of meters to several kilometers. This value depends on the hydrology, the excitement, the size of the boat, the presence of ships and vessels that cause serious interference, and the metal parts at the bottom, especially in the active mode. "

However, the Ka-27PL can carry not only a multitude of “ears” (hydroacoustic buoys) in the search option of loading, but also (in the shock version) a “baton” - 800 kg of combat load: anti-submarine torpedoes, missiles or 50- and 250-kilogram air bombs . There is also a special search and rescue modification of the Ka-27PS helicopter, equipped with a winch for lifting the injured from the water.

The coaxial scheme with two rotors of opposite rotation, a distinctive feature of the Kamov design bureau machines, was not chosen by chance - this design allows the helicopter to be made more compact, which is important for placement on small ships. The blades of the ship's helicopters are made foldable to further reduce the size of the machine.
“The handling and maneuverability of machines with coaxial screws is excellent,” said the helicopter commander, captain Alexey Kutepov. - The main specificity of flights over the sea?

It is difficult to navigate over a uniform surface and hang at a small height, keeping the car still while the navigator-operator studies the situation with the help of GUS. And the most difficult, of course, is landing on a ship. From a helicopter, the landing pad looks about like a matchbox from a height of human height ... "