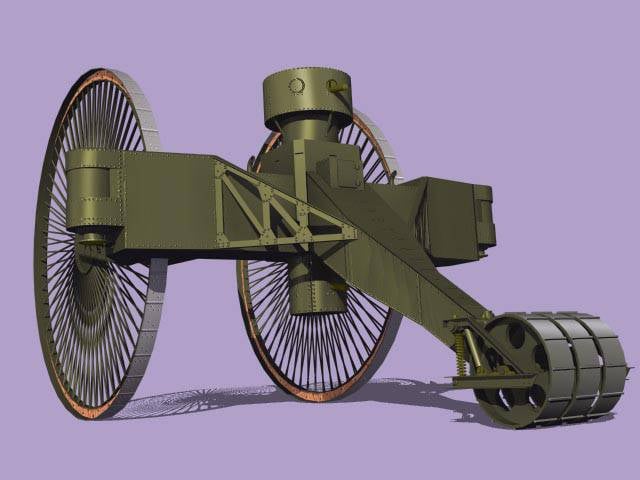 The illustration shows the most famous wheeled giant of the First World War, the “Tsar-tank” designed by Nikolai Lebedenko. There are quite a few articles written about this ambitious and initially unviable project, but few know that besides it there were at least two dozen similar projects in the 1910s. Some, like the "Tsar-tank", were embodied in the metal. 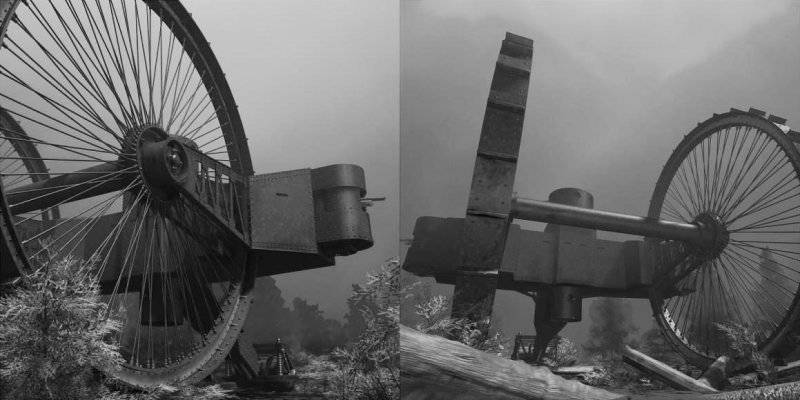 The first major project of a giant wheeled tank proposed at the start of World War I the captain of the British Royal Naval aviation Thomas Hetterington service. His car was supposed to have 80 mm armor and move on three wheels: in front of a pair of leading wheels with a diameter of 12 m (!) Each and one steering at the rear. It was supposed to place three towers on the armored platform, in each of them it was planned to install two 102-mm guns.

Two diesel engines were supposed to provide the car with the speed of 8 – 12 km / h. For the British, who had a powerful military industry, it would not be difficult to build such a machine, but when reviewing the project it turned out that the tank mass could reach 1000 tons, which in itself is unacceptable.

In addition, the giant 12 height, 30 length and 24 width m is a good target for enemy artillery. Do not forget about sopromat: with a rigid suspension of all wheels to provide the necessary structural strength is extremely difficult. Therefore, practical British built a reduced model of wood and, having studied it, decided to stop all work on the “cruiser” Hetterington, which happened in June 1915 of the year.

However, the British history it can also be considered quite prudent, because at the same time in the United States there existed — though only on paper — a project of a huge wheeled tank, called the Holt 150 ton Field Monitor (“Holt's 150-ton field monitor”). As in the case of the previous car, it was driven at once by two steam engines working each on both wheels, for which both units (like on many modern off-road vehicles) had a separate gearbox.

In this case, only the front wheels were driven, and the two rear wheels could not turn. The diameter of all the wheels was 6 m, which in theory was to provide the "field monitor" with a fairly good cross.

But if the famous Russian “Tsar-tank” made an impression with its 9-meter-high wheels, the American one - with its weaponry. According to the designers, two 152-mm naval guns, which were usually placed on cruisers, were supposed to stand on it! The auxiliary battery of ten Colt machineguns of the 1895 model of the year served as auxiliary armament, of which four coaxial ones were located in two towers, and the other six were to fire through the embrasures in the hull.

The crew of this monster consisted of 20 people - even more than on the famous German tank A7V. The thickness of his armor was relatively small - only 6 – 18 mm, so she could not resist the blows of the German 77-mm field gun, and therefore there was almost no sense in this car.

The weight was too large - 150 t, so it is not surprising that this development has not left the drawing board. In the history of world tank building, there was only one wheeled giant tank - built in Russia "Tsar-tank". And in any case, the American "150-ton field monitor" by as much as three meters did not reach the Russian counterpart in wheel diameter.

A little later, the American developers from Holt proposed another wheel monster concept - Steam Wheeled Tank. The machine was even built, and not at the beginning of the war, but already in February of the 1918, when it became clear to the engineers: the tracked vehicles outnumber the wheeled ones. Externally, the "tank" had the appearance of a three-wheeled children's bicycle: the driving wheels were located in the front, and the steering wheel, and even with the "tail" to overcome the enemy's trenches, from behind.

Tests of the “Steam Wheel Tank” —the name given to this strange mechanism by the US military — were conducted from March to May 1918 at the Aberdeen Proving Ground in Maryland. It turned out that his patency was even worse than the tanks on the chassis of the Holt tractor, and he was also armed with one 75-mm mountain howitzer in the front wall of the hull and two machine guns in the corners to shoot over both wheels at once parties.

The diameter of the wheels was 2,4 m with a width of 90 cm, that is, they were not excessively large (hence not too high throughput). The thickness of the armor ranged from 5,8 to 16 mm, the length of the vehicle was 6,77 m with a width of 3,07 and a height of 3, which automatically turned the tank into a good target.

Reservation of the first was calculated on protection from field artillery fire, the second - from serf fire. The car on the sketch design looked just awful. In the version of the Field Armadillo, the steel bridge truss with a length of 35 m (!) And a width of 3 m relied on ten leading armored drum rollers with a diameter of 2,3 m. Inside each drum there should have been a power compartment with a petrol engine 160 – 200 hp, clutch, gearbox, generator, fan, fuel tank and tools, and on its outer side - loopholes for two machine guns and a bomb bomb!

Thus, in the 20 "drums" there would be 40 machine guns and 20 bomb bomb, that is, the fire power of this "tank" was assumed to be quite exceptional. But Porokhovshchikov this seemed a little, and he provided for the installation of two armored towers in the front and rear parts of the farm. Each of them carried a heavy gun caliber 4 – 6 dm (101,6 – 152,4 mm) and a twin gun with a smaller caliber. In the central part there was an armored felling with workplaces for the battleship commander, an artillery officer and his assistant, a senior mechanic, a telegrapher, and a searchlight was mounted on the roof of the felling.

The crew of the "Field Armadillo" was designed by 72 man.
The thickness of the armor on Porokhovshchikov's car was like a good cruiser - 101,6 mm. The assumed speed could reach 21 km / h, while (as the designer claimed) the “battleship”, due to the length of the base, could overcome obstacles up to 11 m wide. Interestingly, such an important question as turning the car was not thought out by the inventor.

In principle, there is nothing complicated here - it is enough to brake the wheels and drums of one side sufficiently, and then the machine would turn like a tank (though the load on the truss structure of the battleship would be prohibitively large). For the transfer of the "battleship" by rail, the Powders "offered to put it on a railway line, although there was no detailed engineering solution to this issue. In principle, if the engineer proposed to make his tank a little smaller, the design could be discussed, but in its present form, the proposal looked clearly utopian, even at the level of the idea.

The “fortress battleship” was different from the “Field” armor and the presence of a deck instead of two armored basins, on which a landing force would be placed under 500 armor protection - a sort of medieval assault vehicle was obtained. The verdict of military experts was predictable: 13 August 1915, at a meeting of the Technical Committee of the GVTU, it was noted that “even without detailed calculations we can confidently say that the proposal is impracticable. It would be advisable for use in a combat situation to distribute the armadillo’s armament to separate mobile units not connected to one rigid system. ”

By the end of 1915, Porokhovshchikov presented a modified project of the Earth Armadillo, which now consisted of pivotally connected links - armor platforms, "able to deviate from each other in all directions." The armor sites were of two options - with armored gun turrets and with logging for landing. Each pad consisted of two sets of drums and a carcass with armor. But the articulated all-terrain vehicle was clearly beyond Porokhovshchikov’s strength, the design lacked flaws.

An unrealizable project was not considered in detail by anyone. It is surprising that not a student offered him, but an engineer with a completed technical education who simply could not understand how insane his design was.

The idea of ​​drum wheels in those years was quite common. For example, engineer Podolsky in October 1915 offered a car on six-meter rollers, driven not by a power unit, but by a company of soldiers. For shelling the enemy on the sides of the strange "rollers" should have been located turrets with machine guns.

There were other interesting attempts. For example, in 1916, the Technical Committee of the GVTU (Main Military Technical Directorate) received a draft 50-ton machine on ten high wheels, of which six were leading and four were turning. The hull had to be protected from 9-mm armor, and she herself had a two-tier layout: at the bottom of the engines and transmission, at the top of six guns and six machine guns.

In April, the mechanical engineer Navrotsky proposed the 1917-ton Advanced Turtle machine, again in the form of a tricycle, only in contrast to the American and German-deployed 192 °. The Naurotsky ACS had a drive roller with a diameter of 180 m in front and two rear wheels, also with a drive, with a diameter of 6,5. Inside the front rink, the project housed two 2,5 hp engines. and transmission mechanisms, and in the side sponsors there are two 150-mm howitzers and two machine guns.

Of course, the serial construction of such monsters (and sometimes the manufacture of a prototype) was out of the question. Even those systems, which were made in a single copy, proved to be extremely bad in tests. About any impressive characteristics attributed to them by engineers, the speech did not go. Therefore, by the end of 1910's, the idea of ​​a tank on super-large wheels had died, and, in fact, had not been born.

Ctrl Enter
Noticed oshЫbku Highlight text and press. Ctrl + Enter
We are
Steel monsters: super heavy tanks of Russia / USSRWunderwaffe for Pantservaffe. Description of the design of the tank "Mouse"
22 comments
Information
Dear reader, to leave comments on the publication, you must to register.