A gift for Mikhail Khodorkovsky: get it, sign it

July 29 2013
121
Part I (gift). 26 of June of the current year, Mikhail Borisovich Khodorkovsky, who is serving time for tax evasion and embezzlement on a particularly large scale in the Segega colony in Karelia, celebrated its 50th anniversary. Anniversary is a big deal. On it usually give good gifts. For obvious reasons, Mikhail Borisovich could not invite anyone to his party, but nevertheless he expected gifts. Primarily from the European Court of Human Rights from Strasbourg. 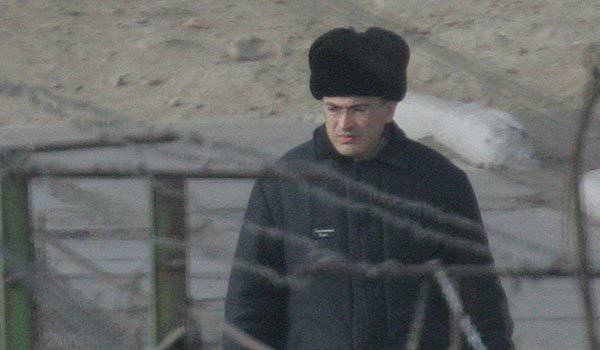 So that in terms of gifts from France, Mikhail Borisovich, at his time, filed a complaint with the ECHR about the injustice of the Russian court, which had once passed a sentence on the so-called “first case”. The injustice, in the opinion, of the former head of YUKOS, was mainly in that the judge issued a politically motivated decision regarding him (Khodorkovsky), and therefore Mikhail Borisovich urged European judges to recognize him as a political prisoner.

The entire Russian ultra-liberal public, with bated breath, expected how, in its opinion, the most fair court in Europe recognized Khodorkovsky as a political prisoner, inflicting a crushing blow on the “Putin's evil empire” and on its leader in the first place. The ultra-liberals were already preparing a festive salad for Olivier, they trimmed the opposition banners with golden threads and made up slogans that could finally brand “this power”, but the decision of the ECHR was delayed. Already the anniversary has passed, and the salad began to turn sour, and the banners were stale ... But Mikhail Borisovich, together with his associates and supporters, were all awaiting a gift.

And the gift came from Strasbourg ... The judges of the ECHR decided to bestow Mikhail Khodorkovsky with ten thousand euros (from the Russian budget), recognizing that the Russian court together with the FSIN at certain moments went a little non-democratic way: Khodorkovsky was too far away from the family clauses on the inadmissibility of the violation of the right to private property and the inadmissibility of breach of confidentiality when communicating the defendant with his lawyers. That's all ... And where is the main gift? - a dumb question froze on the lips of Mikhail Borisovich, who at one time heated the Russian state for billions of dollars. Where is the status of a political prisoner laid for me, languishing in the dungeons of the regime? !!

But there is no such status, Mikhail Borisovich, picking up the marble floor of the ECHR with the toe of a varnished judicial boot, said the judge in Strasbourg. The court did not discern any political motivation in the case, but, having carefully studied the documents, once again came to the conclusion that there is a banal criminal act in the case - you simply made public money, esteemed Mr. Khodorkovsky, and didn’t blow ... And after they had hitched up and were under the gun of the Russian law enforcement agencies, the cunning guys from the anti-Putin flank instantly dragged their political status to your case. They say that we will enter the political paradise on this Khodorkovsky ... But once again: there is no such status in your case!

And the Olivier salad flew into the bin, the banners sewn with gilded threads rolled up into a tube, the slogans remained on unused digital media ... The anniversary was finally blurred ... The hero of the day and all those who waited for gifts for the hero of the day received a good Strasbourg slap, which was clearly not expected .

And after such a decision by the ECHR, the ranks of the ultraliberal public strongly creased and indulged in fermentation. No, you know, in the minds of those crumpled and fermented do not fit, how can that be! .. How could the most impartial court in all of mother Europe make such a decision. Well, it would be okay if it were the Moscow City Court or the Kirov court - one could shout that Vladimir Putin’s “clawed hand” reached out to the judges, took them by the throat so that the courts could not find any political background in the case. But so well, fathers are holy, the European Court of Human Rights! .. How can you? .. Not really, the very “clawed hand” of the Russian authorities reached out to Dean Spielmann, who has been the president of the ECHR since last year ...

Lyudmila Alekseeva, one of the main persons of the irreconcilable Russian opposition, cried out on this issue in good faith:

My attitude towards the ECHR decision is negative. I would say that the decision is not only soft, but also cowardly. If they did not see the political component in this process, then they have something with a vision.

That same Lyudmila Alekseeva, who just a few days ago celebrated her own 86-th birthday and also hoped to distribute "democratic gifts". Well, what to say ... Of course, Lyudmila Mikhailovna in her 86 with a vision is much better than that of the judges of the ECHR ...

And what - news! Ms. Alekseeva accuses the European Court of Human Rights of being cowardly. Apparently, in the gray matter of the ultraliberal public, the thought had already ripened that Putin had reached European judges ... How long the president’s hands are still, so long that American courts will begin to walk at such a pace ... And now Lyudmila Mikhailovna rely in his, forgive my God, human rights work? Well, literally no one else. Well at least Cardin with McCain somehow keep at all, and then in general sushi oars ...

The reasoning of the human rights activist once again proves that in Russia a surprising social stratum had emerged that a priori is not going to take into account any decisions of any courts. The judgment of God and that is obstructed and called politically motivated and sold to Vladimir Putin ... What does this prove? And it proves that people shouting and continuing to shout about the political process in relation to the oligarch Khodorkovsky are not only not familiar with the essence of the matter, but are not going to get acquainted with it. Their task is not at all in this.

The task is for Mikhail Borisovich Khodorkovsky to stay in prison as long as possible and thereby give a reason to dig under the current Russian government. As they say, all means are good in the political struggle, and if everything is good, then why not use the former head of Yukos, who has plundered billions of people's funds, as a prisoner of conscience. And then before the heap Navalny turned up, Pussy-Mushi and other adherents of world democracy. What would be a nice precedent for everyone else ...

But the judges of the European Court of Human Rights undermined the undermining, and were so frankly asleep that in the ranks of the non-systemic opposition the orientation was literally completely lost (if there was any such thing besides the jabs towards Putin). The vestibular near-political apparatus failed and now the non-system-oppository, remotely controlled mechanism turned on the spot, not understanding where the right is, where is left, where is the top, and where is the bottom ...

Well, Mikhail Borisovich will soon receive his 10 thousand euros from the Russian budget, since after Russia's entry into 1998 under the jurisdiction of the European Court of Human Rights, the decisions of this court of the Russian Federation have to be implemented. In general, Mikhail Borisovich is true to himself: even being in a colony, he does not miss the opportunity to run his hand into the budget ... Although this time this launch obviously will not bring him moral satisfaction.

Part II (non-giving). Catching at least for some straw, the Russian ultra-liberal publications decided to subject the ECtHR decision to interpretation. For example, on the website of Ekho Moskvy radio station on Friday, notably in 03: 03 in Moscow, a note appeared that the ECtHR allegedly decided to reconsider its decision and is ready to quote: "admit that some political groups and government officials there were reasons to prosecute the applicants. " This information was provided by Ms. Moskalenko, a lawyer. As you can see, “Echo of Moscow” and certain “pravoshchitniki” do not surrender: they say, the ECHR is simply not understood, they somehow recognize the policy in the case, but only if you look at the case upside down at an acute angle ...