In a great swimming 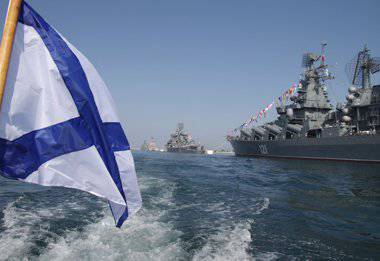 Russian fleet is being reborn. Sailors, creators of marine technology of all generations and just the citizens of Russia are celebrating the Day of the Navy, which the country will celebrate on the coming Sunday, with optimism.


On the eve of Naval Day fleet at the Sevmash enterprise in Severodvinsk, a new nuclear submarine "Novosibirsk" was laid. This missile carrier will be the third in the line of multi-purpose atomarines of the Ash project, developed by the St. Petersburg Maritime Engineering Bureau Malachite.

Ash trees with a displacement of more than 13 thousand tons with mine, torpedo, and rocket armament can sink to the 600-meter depth and move at a speed of about 30 nodes, while remaining almost imperceptible to potential enemies. The first serial submarine of the project, Kazan, is already being built in the Sevmash building berth, and the head order, Severodvinsk, together with the Alexander Nevsky and Vladimir Monomakh strategic submarines of the Borey project, is undergoing state tests. This year, all three submarine missile carriers are to take up combat duty. The main "Borey" - the cruiser "Yuri Dolgoruky" - is already in the fleet. In the slipway of Sevmash - the fourth rocket carrier, "Prince Vladimir". The 170-meter, with a 24 displacement of thousands of tons of Borei - the brainchild of the Rubin Central Design Bureau for Marine Engineering - with the Bulava intercontinental ballistic missiles, capable of diving at 450 meters and developing the speed of 29 nodes, will become the basis of Russia's nuclear naval forces until the middle of the current century; "Ash" - the main multipurpose submarines.

Defense Minister Sergei Shoigu said: “As a result of the implementation of the state armament program up to 2020, eight missile submarine cruisers, 16 multipurpose submarines, 54 surface warships of various classes should arrive in the fleet.” True, "in the golden age" of domestic shipbuilding in the early 80-s, only Russian shipyards annually replenished naval forces with 45 combat units. But the current pace indicates a real revival of the industry, and hence the fleet.

On the upgrade of marine technology in the State Armaments Program to 2020, it is provided five trillion rubles. Such expenses are understandable and explainable. And not only because the fleet, which almost was not allowed “on needles” in 90, should be revived in principle - Russia is surrounded on all sides by the sea. Unlike other countries, we have to defend at the same time five large maritime theaters (assuming the Caspian Sea), and the state, respectively, contain five independent fleets, the consolidation of which is almost impossible at once. But it is also necessary to ensure the security of the Russian economic zone, and to represent the interests of the state, showing the St. Andrew’s flag, in all areas of the World Ocean. Other sea powers, unlike Russia, did not restrict the construction of their fleets. And now they are very jealously watching our activation. Could this be the reason for the decision taken in the USA to build a series of nine new destroyers of the Arly Burk type before 2017? The command of the US Navy has already concluded relevant contracts with shipbuilding enterprises General Dynamics and Hungtington Ingalls for the sum of 6,1 billion dollars.

Leading experts of the Navy's Shipbuilding and Arms Research Institute, Alexei Bykov and Kirill Rozhin, note the following current trends in the global surface shipbuilding: the number of combat units is not decreasing, the air defense of naval equipment is strengthening, the role of unmanned aerial vehicles is increasing, the fight against terrorism and the growth in drug trafficking are forcing to increase the number of patrol vessels. Such global features, of course, are taken into account in shaping the image of the modern Russian fleet, with the aim of ensuring that it lasts a long time. historical the outlook remained effective, formidable and competitive.

The combat composition of the surface universal cruisers, which is headed by "Peter the Great", will be added to one more similar missile carrier - "Admiral Nakhimov". It was decided to overhaul and modernize it. The project will be carried out by the Northern Design Bureau, where a series of these world's largest universal nuclear surface ships (length 250 meters, displacement 25 thousand tons) was developed. 70% equipment to be replaced. As a result, in 2018, the Admiral Nakhimov will become the most modern surface-launched missile carrier, equipped with the latest weapons.

Just recently, shipbuilders of the Zvezdochka Ship Repair Center completed an important stage in the modernization of the Marshal Ustinov non-nuclear missile cruiser of the Atlant project (length 186 meters, displacement 11500 tons). The ship will return to combat in 2015 year. After him, the flagships of the Black Sea and Pacific fleets will be reconstructed with the missile cruisers “Moscow” and “Varyag”.

The frigates, designed by the Northern Design Bureau, are frigates of the far sea zone, with a displacement of more than three to four thousand tons, built at the Kaliningrad plant Yantar and the St. Petersburg shipyard Severnaya. The lead frigate, the Admiral of the Fleet of the Soviet Union Gorshkov, entered the factory mooring trials and would soon enter service. Starting with 2016, Severnaya Verf plans to deliver one frigate per year, while six are planned to be built.

On the eve of the Day of the Navy at the "Northern Shipyard" laid the first serial corvette, the ship near the marine zone, "Provorny." Leading - "Boky" - enjoyed increased attention at the last Naval Salon. Relatively compact (with a displacement of 2, thousands of tons, about 100 meters in length), sufficiently high-speed (27 units) ships, developed at the Almaz Central Marine Design Bureau, are equipped with efficient armament, modern control systems and on-board automation. Thanks to technology "Stealth" they are hardly noticeable for potential opponents. “Northern shipyard, starting from 2015, plans to transfer to the fleet also one corvette per year.

The company's order book includes two high-tech communication vessels. Firstborn - "Yuri Ivanov" - is preparing to be launched. The developer, the Iceberg Central Design Bureau, tried in a relatively compact package (displacing 2500 tons) to accommodate the maximum of high-intelligence equipment and create maximum conditions for the crew of 120 specialists during hikes of the length of 8000 miles. The ships of this project belong to the class of large reconnaissance ships and are designed to monitor the components of the US missile defense system.

Almaz Shipbuilding Company, Srednenevsky and Zelenodolsky Shipbuilding Plants, Nizhny Novgorod Krasnoe Sormovo, Far Eastern Zvezda and other shipyards, each in its program, supply ships and boats of various types and purposes to the fleet.

It is most encouraging that not only specialists, but also residents of the country - from Moscow to the outskirts, support the future of the Russian fleet and its flagship. This spring, a group of St. Petersburgers turned to the president with a proposal to raise funds for the development and creation of a series of new Russian aircraft carriers by the whole world. Moreover, modern electronic technologies make it possible to make the collection and spending of money absolutely transparent, so that not a single ruble is left “to the left”. They proposed to call the All-Russian Aircraft Carrier a special all-Russian program. From the Presidential Administration, a letter was sent to the Ministry of Defense to study, from where the answer came that the proposal deserves attention and will be taken into account when the aircraft carrier project acquires a more visible shape. Wait is not long.