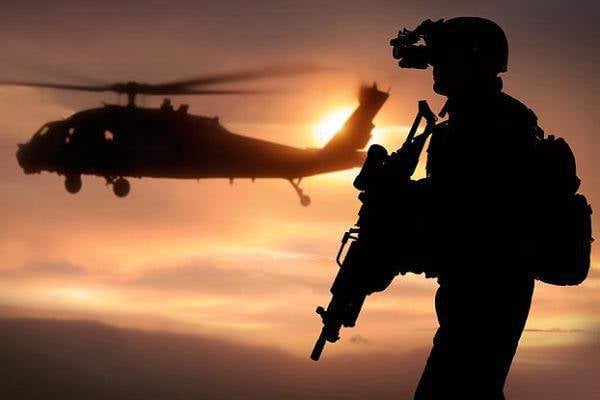 There is no error in the title of the article. The most expensive, most pretentious detachment of special forces in the world - the American "Delta Force" - "Force Delta" - is also the most unsuccessful and inglorious.


It all went to hell - US President Jimmy Carter swore and hung up. He can be understood: he has just received a report that the operation of the special forces authorized by him on the territory of a sovereign foreign country ended in failure. And now he himself was threatened with failure in the next presidential election.

It all started on 4 in November 1979. A group of students from Tehran University, outraged by Washington’s illegal actions, took over the US Embassy in Tehran, taking 53 hostage by its employee. In exchange for the freedom of the hostages, the students demanded that President Carter issue the fugitive Iranian shah and return the wealth stolen by the shah. When the American government became convinced that no diplomatic settlement measures (i.e., threats and blackmail) had any effect on Tehran, it was decided to use their fists.

Iranians were instructed to supervise the US military super elite, the Delta special forces unit under the command of Colonel Charles Beckwith, a “tough guy,” as if descended from a Hollywood action movie about Rambo. A veteran of Vietnam, "green beret", hung with medals from neck to waist, Bequit created with his own hands and prepared "Delta" in spite to his rival colleagues, the British special forces from the 22 Special Airborne Service regiment - 22SAS, the legendary detachment that has many brilliant victories.

“Charlie,” said Brigadier Calvert, the 22SAS commander, gently, visiting Delta, “I'm afraid your guys have too many muscles.” .. No matter how it affects the head.

Beckwith preferred not to hear Calvert's podnka (well, of course, the Yankees are the coolest!), But in vain.

... Operation Eagle Claw began on 24 on April 1980 of 8 of the Stallion transport assault helicopters CH-53 and the same AN-6 attack aircraft launched from the deck of the aircraft carrier Forrestal cruising in the Persian Gulf and headed for the point Desert-1 is an abandoned English airfield halfway to Tehran. Soon, they were joined by 8 transport aircraft C-130 "Hercules" with paratroopers and additional fuel on board, taking off from the airfield on. Masirah (Oman). Since the range of the helicopters was insufficient, in the "desert-1" they had to refuel with the "Hercules" and take on board the paratroopers. Then the helicopters flew to the point “desert-2” - the old salt mines in 80 km from Tehran. According to the plan of the operation, on the night of April 26, the special forces, with fire support from AN-6, were to take the embassy by storm, release the hostages and retreat to Tehran stadium with them, from where the stallions would take the whole company.

- 50 on 50 - if the equipment and people will work as it should, - appreciated the plan mentioned above Brigadier Calvert.

Did not work. For starters, one "Stallion" crashed into the water right at the side of the aircraft carrier. The second got lost in the dark and chose to return. The third sat on a forced landing in the desert. Thus, without a single shot, the group of transport helicopters was reduced to a dangerous limit: in order to take out all the hostages and paratroopers, Beckwith needed a minimum of 4 CH-53, and this taking into account possible losses from anti-aircraft fire. In the meantime, the lining continued to pile up one on another ...

Intelligence swore and swore that “desert-1” is really desert, that is, a completely deserted place. In reality, it turned out that a busy highway passes nearby! The nerves of the "supermen", apparently, have already begun to take, because the delto workers have not invented anything smarter than how to shoot a fuel tanker passing by in order to block the road. A rising pillar of flame was visible from a distance of 70 km! If the neighboring Iranian garrisons up to this point slept the sleep of the righteous, then the fire made by the Americans just tore them from their beds. Moreover, the driver of the fuel truck managed to escape on a passing car. Deltowers chased him on mopeds, but did not catch up, fired at, but did not hit. The reality looked less and less like a Hollywood advertising action movie ...

Meanwhile, work was in full swing at the aerodrome. When refueling the helicopters, it turned out that the hoses were rather short, and since the detachments, of course, were not at the disposal of the detachment, the helicopters had to taxi to the tanker aircraft on their own. At the same time, one of the “stallions” blades of its screw slashed through the “Hercules” fuel tank ...

Now the flame was visible, probably even from Tehran! Both cars burned to the ground along with the crews (8 dead), 4 paratrooper received severe burns. For the thin nervous system of the American Rambo, this turned out to be a drop that filled the cup. Before the eyes of the “coolest guys in the world”, an armored vehicle gathering dust from the airfield was already standing, and the Iranian motor-mechanized infantry with a six-year experience of the hardest war, armored in Iran, didn’t smile - it’s not for students to shoot. Grinding his teeth, Colonel Beckwith ordered to throw the helicopters and reel the fishing rods.

No sooner said than done. The Yankee's Mandrazh clearly turned into a real panic by now, because during the hasty flight no one even took care of burning serviceable helicopters! So they got the Iranian army - with weapons, top-secret instruments and equally secret documents of the operation "Eagle Claw" - for the fun of the whole world. So, again, President Carter can be understood ...

Beckwith for this failure ahead of time sent to retire, but the luck "Delta" is not added. Again and again, with surprising consistency, Beckwith's pets managed to fail the tasks assigned to them. They were beaten in Asia, Africa and Latin America; in Europe they didn’t beat just because Delta wasn’t involved there. After another failure in Grenada, the American commander, General Norman Schwarzkopf, publicly vowed that he would not agree to use Delta in any operations led by him! However, when the time came to invade Iraq, the general was forced to connect the Delta to the search for Iraqi ballistic missiles, presumably in order to rehabilitate the many times defiant special forces. Reluctantly, Schwarzkopf agreed - and the deltoists brilliantly confirmed his point: the only raid with their participation ended in another defeat ...

At one time, the author of these lines commanded the marine special forces reconnaissance group - divers, saboteurs, or, streamlined, "combat swimmers." In the midst of the “perestroika”, our opponents-colleagues arrived in our unit with an unofficial friendly visit - American combat swimmers from the US Navy SEAL, a multiply advertised group of special forces, “seals”. The program of the visit provided for the holding, so to speak, of a friendly match - shooting, orienteering and overcoming the obstacle course. And nothing happened!

The funniest thing happened on orienteering. The guys came to us with their GPS gadgets, and according to the conditions of the competition, each team - ours and the American - was only supposed to have a map and a compass. Both squads landed from helicopters at a point unknown to them in advance; They had to compare their map and terrain, determine their location and make a forced march to the meeting point. In our detachment, such assignments were bodyblade that had been over the edge of everything; the matter is so simple that I trusted ordinary soldiers to determine the terrain on the ground - I was tired of this game a long time ago, it’s all the same that I reread the old book for the tenth time. So, "seals" managed to get lost immediately. And instead of moving along the route, our group had to look for these pseudo-supermen in the coastal taiga, so that, God forbid, they did not bend from hunger or catch the eye of the soldiers of the Interior Ministry troops or border guards - both those and other people are special, sharply sharpened to fight and shoot without reflection. And rightly so.

When we found the "seals", they looked, to put it mildly, guilty. The visit program had to be crumpled and quickly completed in the simplest way - joint drinking.