Russian with Chinese converge in Chebarkul 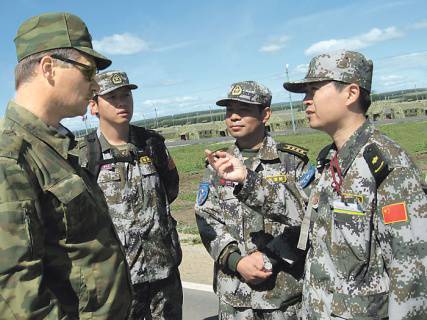 The working groups of the joint strategic command of the Central Military District (CEC) and the Shenyang Military District of the People’s Liberation Army of China (PLA) are finalizing the preparation of a joint Russian-Chinese antiterrorist command mission "Peace Mission - 2013". This information was reported to the press service of the Central Military District. “The exercise will take place from July 27 to August 15. The active phase of the exercise is scheduled for August 15 at the Chebarkul training ground (Chelyabinsk region). More than 1,5 thousand Russian and Chinese military personnel will take part in it, ”the information says.


It notes that the main purpose of the upcoming training exercise is the joint work of the government and the troops on the preparation and conduct of hostilities in the course of the joint anti-terrorist operation. The exercise will take place in three stages, including the redeployment of troops, the planning of an operation and the conduct of joint combat operations. The joint command will include 60 officers from the joint strategic command of the Central Military District and the Shenyang Military District. A battalion tactical group of the Armed Forces of Russia and tactical units from the Chinese army are involved in practical actions. The ground component will be supported by a joint air group comprising bombers and helicopters for various purposes of the 2 command of the Air Force and Air Defense and the PLA Air Force.

It remains to add that this is not the first Russian-Chinese doctrine, which takes place at the Chebarkul military training ground. The first in the framework of the Shanghai Cooperation Organization took place in 2007 year. In it, except for Russia and China, warriors from Kazakhstan, Tajikistan and Kyrgyzstan took part. And the very first were held in 2005 year on the Shandong Peninsula and in the waters of the Yellow Sea. Since then, they are repeated every year or two. Alternately - in the territory of the Middle Kingdom or our country and serve to strengthen the combat interaction. It is possible, sometime this may be useful.

Ctrl Enter
Noticed oshЫbku Highlight text and press. Ctrl + Enter
We are
The action “Military service under the contract is your choice!” In Rostov-on-Don: future contract servicemen, exhibitions and “Russian Knights”
Military Reviewin Yandex News
Military Reviewin Google News
10 comments
Information
Dear reader, to leave comments on the publication, you must to register.